The Book Cliffs are a series of desert mountains and cliffs in western Colorado and eastern Utah in the western United States. [1] They are so named because the cliffs of Cretaceous sandstone that cap many of the south-facing buttes appear similar to a shelf of books. [2] [1]

There are also many small streams that contain a variety of trout species.

In January, 2009, Utah Division of Wildlife Resources officials transplanted 31 bison from the Henry Mountains bison herd to the Book Cliffs. [3] The new group joined 14 animals previously released in August, 2008 from a private herd on the nearby Uintah and Ouray Indian Reservation. [4] Since this herd is located approximately 100 miles (160 km) north of the Henry Mountains, across mostly harsh, desert terrain, it should perhaps be considered as a separate herd, the Book Cliffs bison herd.

The Western Interior Seaway was a large inland sea that existed during the mid- to late Cretaceous period as well as the very early Paleogene, splitting the continent of North America into two landmasses, Laramidia to the west and Appalachia to the east. The ancient sea stretched from the Gulf of Mexico and through the middle of the modern-day countries of the United States and Canada, meeting with the Arctic Ocean to the north. At its largest, it was 2,500 feet (760 m) deep, 600 miles (970 km) wide and over 2,000 miles (3,200 km) long.

The Henry Mountains is a mountain range located in the southeastern portion of the U.S. state of Utah that runs in a generally north–south direction, extending over a distance of about 30 miles (48 km). They were named by Almon Thompson in honor of Joseph Henry, the first secretary of the Smithsonian Institution. The nearest town of any size is Hanksville, Utah, which is north of the mountains. The Henry Mountains were the last mountain range to be added to the map of the 48 contiguous U.S. states (1872), and before their official naming by Thompson, were sometimes referred to as the "Unknown Mountains." In Navajo, the range is still referred to as Dził Bizhiʼ Ádiní.

The San Juan Basin is a geologic structural basin located near the Four Corners region of the Southwestern United States. The basin covers 7,500 square miles and resides in northwestern New Mexico, southwestern Colorado, and parts of Utah and Arizona. Specifically, the basin occupies space in the San Juan, Rio Arriba, Sandoval, and McKinley counties in New Mexico, and La Plata and Archuleta counties in Colorado. The basin extends roughly 100 miles (160 km) N-S and 90 miles (140 km) E-W.

The Dakota is a sedimentary geologic unit name of formation and group rank composed of sandstones, mudstones, clays, and shales deposited in the Mid-Cretaceous opening of the Western Interior Seaway. The usage of the name Dakota for this particular Albian-Cenomanian strata is exceptionally widespread; from British Columbia and Alberta to Montana and Wisconsin to Colorado and Kansas to Utah and Arizona. It is famous for producing massive colorful rock formations in the Rocky Mountains and the Great Plains of the United States, and for preserving both dinosaur footprints and early deciduous tree leaves.

The Naturita Formation is a classification used in western Colorado and eastern Utah for a Cretaceous Period sedimentary geologic formation. This name was "applied to the upper or carbonaceous part of Dakota Group" by R.G. Young in 1965, naming it for Naturita, Colorado. The name was not generally accepted for that strata, and it has not been used by U.S. Geological Survey authors. 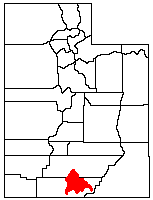 The Kaiparowits Plateau is a large, elevated landform located in southern Utah, in the southwestern United States. Along with the Grand Staircase and the Canyons of the Escalante, it makes up a significant portion of the Grand Staircase-Escalante National Monument. Its extension to the southeast, Fiftymile Mountain, runs nearly to the Colorado River and Lake Powell, and is a prominent part of the northern skyline from the Glen Canyon National Recreation Area.

Colorado is a geologic name applied to certain rocks of Cretaceous age in the North America, particularly in the western Great Plains. This name was originally applied to classify a group of specific marine formations of shale and chalk known for their importance in Eastern Colorado. The surface outcrop of this group produces distinctive landforms bordering the Great Plains and it is a significant feature of the subsurface of the Denver Basin and the Western Canadian Sedimentary Basin. These formations record important sequences of the Western Interior Seaway, and as the geology of this seaway was studied, this name came to be used in states beyond Colorado, but was later replaced in several of these states with more localized names.

The Fox Hills Formation is a Cretaceous geologic formation in the northwestern Great Plains of North America. It is present from Alberta on the north to Colorado in the south.

The Point Lookout Sandstone is a Cretaceous bedrock formation occurring in New Mexico and Colorado.

The Straight Cliffs Formation is a stratigraphic unit in the Kaiparowits Plateau of south central Utah. It is Late Cretaceous in age and contains fluvial, paralic, and marginal marine (shoreline) siliciclastic strata. It is well exposed around the margin of the Kaiparowits Plateau in the Grand Staircase – Escalante National Monument in south central Utah. The formation is named after the Straight Cliffs, a long band of cliffs creating the topographic feature Fiftymile Mountain.

The Henry Mountains bison herd, numbering 250 to 400 bison, is one of only four free-roaming and genetically-pure herds on public lands in North America. The other three herds are the Yellowstone Park bison herd which was the ancestral herd for the Henry Mountains animals, the Wind Cave bison herd in South Dakota and the herd on Elk Island in Alberta, Canada.

The Morrissey Formation is a stratigraphic unit of Late Jurassic (Portlandian) age in the Western Canada Sedimentary Basin. It is named for outcrops on Morrissey Ridge, 16 kilometres (10 mi) southeast of Fernie, British Columbia, and is present in southeastern British Columbia and southwestern Alberta. 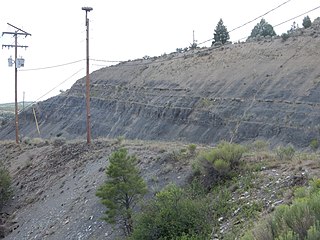 The Graneros Shale is a geologic formation in the United States identified in the Great Plains as well as New Mexico that dates to the Cenomanian Age of the Cretaceous Period. It is defined as the argillaceous or clayey near-shore/marginal-marine shale that lies above the older, non-marine Dakota sand and mud, but below the younger, chalky open-marine shale of the Greenhorn. This definition was made in Colorado by G. K. Gilbert and has been adopted in other states that use Gilbert's division of the Benton's shales into Carlile, Greenhorn, and Graneros. These states include Kansas, Texas, Oklahoma, Nebraska, and New Mexico as well as corners of Minnesota and Iowa. North Dakota, South Dakota, Wyoming, and Montana have somewhat different usages — in particular, north and west of the Black Hills, the same rock and fossil layer is named Belle Fourche Shale.

The Burro Canyon Formation is an Early Cretaceous Period sedimentary geologic formation, found in western Colorado, the Chama Basin and eastern San Juan Basin of northern New Mexico, and in eastern Utah, US. 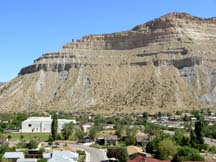 The Mesaverde Group is a Late Cretaceous stratigraphic group found in areas of Colorado, New Mexico, Utah, and Wyoming, in the Western United States.

The Kootenay Group, originally called the Kootenay Formation, is a geologic unit of latest Jurassic to earliest Cretaceous age in the Western Canada Sedimentary Basin that is present in the southern and central Canadian Rockies and foothills. It includes economically important deposits of high-rank bituminous and semi-anthracite coal, as well as plant fossils and dinosaur trackways.