The Chalk Mountains are a mountain range in Archuleta County, Colorado. [1] 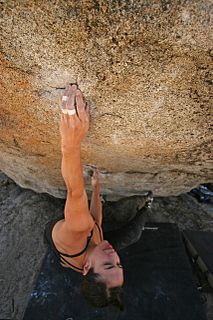 The Cretaceous is a geological period that lasted from about 145 to 66 million years ago (mya). It is the third and final period of the Mesozoic Era, as well as the longest. At nearly 80 million years, it is the longest geological period of the entire Phanerozoic. The name is derived from the Latin creta, 'chalk', which is abundant in the latter half of the period. It is usually abbreviated K, for its German translation Kreide.

Chalk is a soft, white, porous, sedimentary carbonate rock, a form of limestone composed of the mineral calcite. Calcite is an ionic salt called calcium carbonate or CaCO3. It forms under reasonably deep marine conditions from the gradual accumulation of minute calcite shells (coccoliths) shed from micro-organisms called coccolithophores. Flint (a type of chert) is very common as bands parallel to the bedding or as nodules embedded in chalk. It is probably derived from sponge spicules or other siliceous organisms as water is expelled upwards during compaction. Flint is often deposited around larger fossils such as Echinoidea which may be silicified (i.e. replaced molecule by molecule by flint). 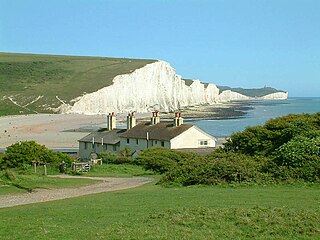 The South Downs are a range of chalk hills that extends for about 260 square miles (670 km2) across the south-eastern coastal counties of England from the Itchen Valley of Hampshire in the west to Beachy Head, in the Eastbourne Downland Estate, East Sussex, in the east. The Downs are bounded on the northern side by a steep escarpment, from whose crest there are extensive views northwards across the Weald. The South Downs National Park forms a much larger area than the chalk range of the South Downs and includes large parts of the Weald.

The Western Interior Seaway was a large inland sea that existed during the mid- to late Cretaceous period as well as the very early Paleogene, splitting the continent of North America into two landmasses, Laramidia to the west and Appalachia to the east. The ancient sea stretched from the Gulf of Mexico and through the middle of the modern-day countries of the United States and Canada, meeting with the Arctic Ocean to the north. At its largest, it was 2,500 feet (760 m) deep, 600 miles (970 km) wide and over 2,000 miles (3,200 km) long. 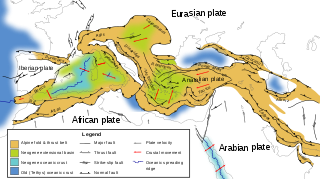 The Lincolnshire Wolds are a range of low hills in the county of Lincolnshire, England which run roughly parallel with the North Sea coast, from the Humber Estuary in the north-west to the edge of the Lincolnshire Fens in the south-east. They are a designated Area of Outstanding Natural Beauty (AONB), and the highest area of land in eastern England between Yorkshire and Kent. 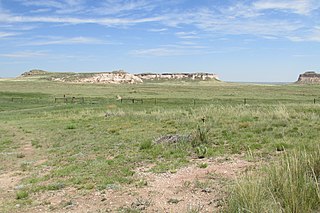 The Chalk Bluffs is a barren chalk escarpment in the northeastern part of the U.S. state of Colorado, stretching from the Wyoming border east of I-25 to near the South Platte River in Logan County and Weld County. 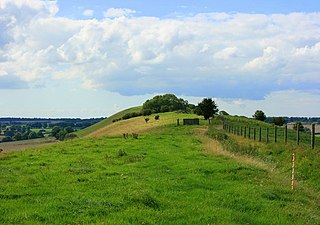 Long Knoll is a hill in the west of the English county of Wiltshire. It is a ridge of chalk grassland, some 1.5 kilometres (0.93 mi) in length, and forms the boundary between the civil parishes of Kilmington to the south and Maiden Bradley to the north. The ridge is 288 metres (945 ft) above sea level at its highest point and it is possible to view King Alfred's Tower, Cranmore Tower, the Black Mountains and Glastonbury Tor on clear days. 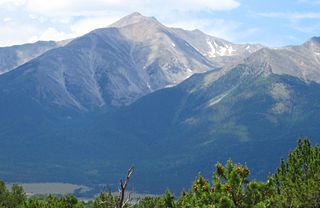 Mount Princeton is a high and prominent mountain summit of the Collegiate Peaks in the Sawatch Range of the Rocky Mountains of North America. The 14,204 feet (4,329 m) fourteener is located in San Isabel National Forest, 7.8 miles (12.6 km) southwest of the Town of Buena Vista in Chaffee County, Colorado, United States. The mountain was named in honor of Princeton University. 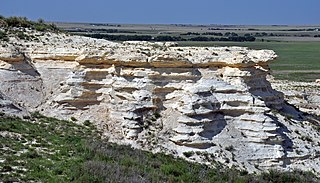 The Niobrara Formation, also called the Niobrara Chalk, is a geologic formation in North America that was deposited between 87 and 82 million years ago during the Coniacian, Santonian, and Campanian stages of the Late Cretaceous. It is composed of two structural units, the Smoky Hill Chalk Member overlying the Fort Hays Limestone Member. The chalk formed from the accumulation of coccoliths from microorganisms living in what was once the Western Interior Seaway, an inland sea that divided the continent of North America during much of the Cretaceous. It underlies much of the Great Plains of the US and Canada. Evidence of vertebrate life is common throughout the formation and includes specimens of plesiosaurs, mosasaurs, and pterosaurs as well as several primitive aquatic birds. The type locality for the Niobrara Chalk is the Niobrara River in Knox County in northeastern Nebraska.

The Chalk Hills are a north–south-running low 'mountain' range in the San Fernando Valley perpendicular to and adjoining the Santa Monica Mountains. They are located in the Woodland Hills District of the City of Los Angeles in Southern California. They run between DeSoto and Winnetka Avenues, from south of Ventura Boulevard to near Victory Boulevard.

The Chalk Mountains are a mountain range in Brewster County, Texas.

Chalk Mountain is a small unincorporated community in Erath County, Texas, United States. It lies along U.S. Route 67 near the Somervell County line, about 12 miles southwest of Glen Rose. In 2009 Chalk Mountain was the site of a meteorite hoax. United States Navy SEAL Sniper Chris Kyle and Chad Littlefield were murdered at a shooting range near Chalk Mountain on February 2, 2013.

Scawt Hill is a volcanic plug in County Antrim, Northern Ireland, in the borough of Larne, 5 km from the village of Ballygally.

Kremenets Mountains National Nature Park covers a cluster of mountains and ridges in the Hologoro-Kremenetskiy range of the Podolian Upland in west central Ukraine. Administratively, the park is in Kremenets District and Shumsk District in Ternopil Oblast.