A cockle is an edible, marine bivalve mollusc. Although many small edible bivalves are loosely called cockles, true cockles are species in the family Cardiidae. True cockles live in sandy, sheltered beaches throughout the world. The distinctive rounded shells are bilaterally symmetrical, and are heart-shaped when viewed from the end. Numerous radial, evenly spaced ribs are a feature of the shell in most but not all genera (for an exception, see the genus Laevicardium , the egg cockles, which have very smooth shells).

The shell of a cockle is able to close completely (i.e., there is no "gap" at any point around the edge). Though the shell of a cockle may superficially resemble that of a scallop because of the ribs, cockles can be distinguished from scallops morphologically in that cockle shells lack "auricles" (triangular ear-shaped protrusions near the hinge line) and scallop shells lack a pallial sinus. Behaviorally, cockles live buried in sediment, whereas scallops either are free-living and will swim into the water column to avoid a predator, or in some cases live attached by a byssus to a substrate.

The mantle has three apertures (inhalant, exhalant, and pedal) for siphoning water and for the foot to protrude. Cockles typically burrow using the foot, and feed by filtering plankton from the surrounding water. Cockles are capable of "jumping" by bending and straightening the foot. As is the case in many bivalves, cockles display gonochorism (the sex of an individual varies according to conditions), [2] and some species reach maturity rapidly.

The common name "cockle" is also given by seafood sellers to a number of other small, edible marine bivalves which have a somewhat similar shape and sculpture, but are in other families such as the Veneridae (Venus clams) and the ark clams (Arcidae). Cockles in the family Cardiidae are sometimes referred to as "true cockles" to distinguish them from these other species.

There are more than 205 living species of cockles, with many more fossil forms. [3]

The common cockle, (Cerastoderma edule), is widely distributed around the coastlines of Northern Europe, with a range extending west to Ireland, the Barents Sea in the north, Norway in the east, and as far south as Senegal.

The dog cockle, Glycymeris glycymeris, has a similar range and habitat to the common cockle, but is not at all closely related, being in the family Glycymerididae. The dog cockle is edible, but due to its toughness when cooked it is generally not eaten, although a process is being developed to solve this problem. [4]

The blood cockle, Tegillarca granosa (not related to the true cockles, instead in the ark clam family, Arcidae) is extensively cultured from southern Korea to Malaysia. [5]

Genera within the family Cardiidae include:

In cuisine and culture

Cockles are a popular type of edible shellfish in both Eastern and Western cooking. They are collected by raking them from the sands at low tide. However, collecting cockles is hard work and, as seen from the Morecambe Bay disaster, in which 23 people died, can be dangerous if local tidal conditions are not carefully watched.

In England and Wales, as of 2011 [update] , people are permitted to collect 5 kg of cockles for personal use. However, pickers wishing to collect more than this are deemed to be engaging in commercial fishing and are required to obtain a permit from the Inshore Fisheries and Conservation Authority. [6]

Cockles are a street food in Cambodia. [7]

Cockles are sold freshly cooked as a snack in the United Kingdom, particularly in those parts of the British coastline where cockles are abundant. Boiled, then seasoned with malt vinegar and white pepper, they can be bought from seafood stalls, which also often have for sale mussels, whelks, jellied eels, crabs and shrimp. Cockles are also available pickled in jars, and more recently, have been sold in sealed packets (with vinegar) containing a plastic two-pronged fork. A meal of cockles fried with bacon, served with laverbread, is known as a traditional Welsh breakfast. [8] [9]

Boiled cockles (sometimes grilled) are sold at many hawker centres in Southeast Asia, and are used in laksa, char kway teow and steamboat. They are called kerang in Malay and see hum in Cantonese.

A study conducted in England in the early 1980s showed a correlation between the consumption of cockles, presumed to be incorrectly processed, and an elevated local occurrence of hepatitis. [10]

Cockles are an effective bait for a wide variety of sea fishes. The folk song "Molly Malone" is also known as "Cockles and Mussels" because the title character's sale of the two foods is referred to in the song's refrain. The shells of cockles are mentioned in the English nursery rhyme "Mary, Mary, Quite Contrary". Cockles are also eaten by the indigenous peoples of North America. [11]

The common English phrase "it warms the cockles of my heart", is used to mean that a feeling of deep-seated contentment has been generated.

Differing derivations of this phrase have been proposed, either directly from the perceived heart-shape of a cockleshell, or indirectly (the scientific name for the type genus of the family is Cardium, from the Latin for heart), or from the Latin diminutive of the word heart, corculum. Another proposed derivation is from the Latin for the ventricles of the heart, cochleae cordis, where the second word is an inflected form of cor, heart, while cochlea is the Latin for snail.[ citation needed ] 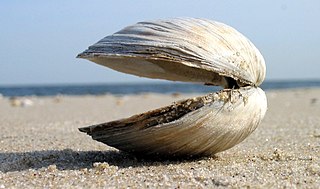 Clam is a common name for several kinds of bivalve molluscs. The word is often applied only to those that are edible and live as infauna, spending most of their lives halfway buried in the sand of the seafloor or riverbeds. Clams have two shells of equal size connected by two adductor muscles and have a powerful burrowing foot. They live in both freshwater and marine environments; in salt water they prefer to burrow down into the mud and the turbidity of the water required varies with species and location; the greatest diversity of these is in North America.

Ark clam is the common name for a family of small to large-sized saltwater clams or marine bivalve molluscs in the family Arcidae. Ark clams vary both in shape and size. They number about 200 species worldwide.

Laverbread is a food product made from laver, an edible seaweed consumed mainly in Wales as part of local traditional cuisine. The seaweed is commonly found around the west coast of Great Britain, and the coasts of Ireland where it is known as sleabhac. It is smooth in texture and forms delicate, sheetlike thalli, often clinging to rocks. The principal variety is Porphyra umbilicalis. Porphyra is classified as red algae; it tends to be a brownish colour, but boils down to a dark green pulp when prepared. Laver seaweed has a high content of dietary minerals, particularly iodine and iron. The high iodine content gives the seaweed a distinctive flavour in common with olives and oysters.

The common cockle is a species of edible saltwater clam, a marine bivalve mollusc in the family Cardiidae, the cockles. It is found in waters off Europe, from Iceland in the north, south into waters off western Africa as far south as Senegal. The ribbed oval shells can reach 6 centimetres (2.4 in) across and are white, yellowish or brown in colour. The common cockle is harvested commercially and eaten in much of its range.

Cerastoderma is a genus of marine bivalves in the family Cardiidae. It includes the common cockle Cerastoderma edule. 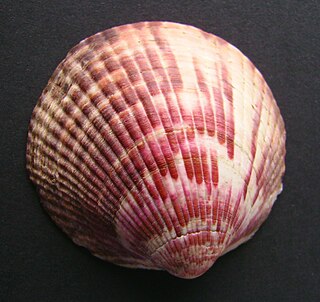 Glycymerididae, often misspelled as Glycymeridae, common names dog cockles or bittersweets, is a worldwide family of salt water clams, marine bivalve mollusks in the order Arcida. They are related to the ark clams. This family contains 45 extant species in four genera.

The dog cockle or European bittersweet is a species of marine clam, a coastal bivalve mollusc of European waters.

Corculum is a genus of small saltwater clams, marine bivalve molluscs in the family Cardiidae, the cockles. They maintain Symbiodinium dinoflagellates as symbionts.

Senilia is a genus of edible saltwater clams, marine bivalve molluscs in the family Arcidae, the ark shells. It contains a single species, Senilia senilis.

Laevicardium, common name "egg cockles", is a genus of saltwater clams or cockles, marine bivalve molluscs in the family Cardiidae, the cockles. They are unusual among the cockles in that they have smooth, rounded, "egg-like" valves.

Corculum cardissa, the heart cockle, is a species of marine bivalve mollusc in the family Cardiidae. It is found in the Indo-Pacific region. It has a symbiotic relationship with dinoflagellates (zooxanthellae), which live within its tissues. 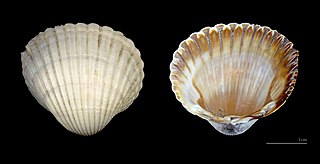 Cerastoderma glaucum, the lagoon cockle, is a species of saltwater clam, a marine bivalve mollusc in the family Cardiidae, the cockles. 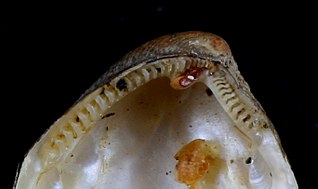 Hinge teeth are part of the anatomical structure of the inner surface of a bivalve shell, i.e. the shell of a bivalve mollusk. Bivalves by definition have two valves, which are joined together by a strong and flexible ligament situated on the hinge line at the dorsal edge of the shell. In life, the shell needs to be able to open slightly to allow the foot and siphons to protrude, and then close again, without the valves moving out of alignment with one another. To make this possible, in most cases the two valves are articulated using an arrangement of structures known as hinge teeth. Like the ligament, the hinge teeth are also situated along the hinge line of the shell, in most cases. 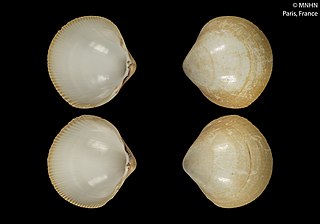 Laevicardium elatum, the giant egg cockle, giant Pacific cockle or the yellow cardinal cockle, is a species of saltwater clam, a cockle, a marine bivalve mollusc in the family Cardiidae, the cockles. This species is found in the tropical Panamic Province, from Southern California south through the Pacific coast of Mexico and the Gulf of California, and as far south as Panama. 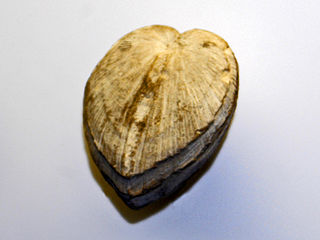 Lunulicardia is a genus of saltwater clams, marine bivalve molluscs in the family Cardiidae, the cockles. Fossils species in this genus are present in the Pliocene deposits of Indonesia and the Miocene deposits of Russia.

Cardium may refer to: