It was recognized by the Allies at the Tehran Conference, along with the AVNOJ as its deliberative body. The Yugoslav government-in-exile of King Peter II in London, partly due to pressure from the United Kingdom, [3] recognized the AVNOJ government with the Treaty of Vis, signed on 16 June 1944 between the prime minister of the government-in-exile, Ivan Šubašić, and Tito. [3] With the Treaty of Vis, the government-in-exile and the NKOJ agreed to merge into a provisional government as soon as possible. The form of the new government was agreed upon in a second Šubašić–Tito agreement signed on 1 November 1944 in the recently liberated Yugoslav capital of Belgrade. DF Yugoslavia became one of the founding members of the United Nations upon the signing of the United Nations Charter in October 1945.

The state was formed to unite the Yugoslav resistance movement to the occupation of Yugoslavia by the Axis powers. The agreement left the issue of whether the state would be a monarchy or a republic intentionally undecided until after the war had ended so the position of head of state was vacant. After the merger of the governments, Josip Broz Tito became Prime Minister and Ivan Šubašić became foreign minister.

The Second Session of the AVNOJ, held in Jajce in November 1943, opened with a declaration that read in part:

The AVNOJ then issued six decrees and the Presidium of the AVNOJ, which continued its functions when it was not in session, followed with four decisions. Together these comprised the constitution of the new state taking shape in Yugoslavia. On 30 November the Presidium gave Tito the rank of Marshal of Yugoslavia and appointed him president of the government (or acting prime minister) and Minister of National Defence. Three vice presidents and thirteen other ministers were appointed to the NKOJ. [4]

The name "Democratic Federative Yugoslavia" was officially adopted on 17 February 1944. On the same day they adopted the five-torch emblem of Yugoslavia. [5]

Its legislature, after November 1944, was the Provisional Assembly. [6] The Tito-Subasic agreement of 1944 declared that the state was a pluralist democracy that guaranteed: democratic liberties; personal freedom; freedom of speech, assembly, and religion; and a free press. [7] However by January 1945 Tito had shifted the emphasis of his government away from emphasis on pluralist democracy, claiming that though he accepted democracy, he claimed there was no "need" for multiple parties, as he claimed that multiple parties were unnecessarily divisive in the midst of Yugoslavia's war effort and that the People's Front represented all the Yugoslav people. [7] The People's Front coalition, headed by the Communist Party of Yugoslavia and its general secretary Marshal Josip Broz Tito, was a major movement within the government. Other political movements that joined the government included the "Napred" movement represented by Milivoje Marković. [6]

Democratic Federal Yugoslavia was ruled by Temporary Government consisting mostly of Unitary National Liberation Front members and small number of other political parties from former Kingdom of Yugoslavia. President of the Government was Josip Broz Tito. Communists held 22 minister positions, including Finances, Internal Affairs, Justice, Transport and others. Ivan Šubašić, from Croatian Peasant Party and former ban of Croatian Banovina, was minister of Foreign Affairs, while Milan Grol, from Democratic Party, was Deputy Prime Minister. Many non-communist government members resigned due to disagreement with the new policy. [8] 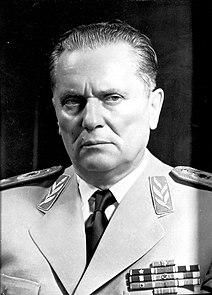 Josip Broz, commonly known as Tito, was a Yugoslav communist revolutionary and statesman, serving in various roles from 1943 until his death in 1980. During World War II, he was the leader of the Partisans, often regarded as the most effective resistance movement in occupied Europe. He also served as the President of the Socialist Federal Republic of Yugoslavia from 14 January 1953 to 4 May 1980. 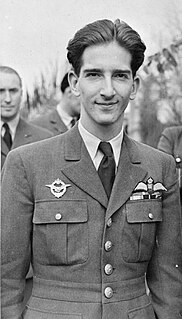 Peter II was the last King of Yugoslavia, reigning from 1934 to 1945. He was the last reigning member of the Karađorđević dynasty which came to prominence in the early 19th century.

The Socialist Federal Republic of Yugoslavia (SFRY), also known as SFR Yugoslavia or simply Yugoslavia, was a country in Central and Southeastern Europe that existed from its foundation in the aftermath of World War II until its dissolution in 1992 amid the Yugoslav Wars. Covering an area of 255,804 km2, the SFRY was bordered by the Adriatic Sea and Italy to the west, Austria and Hungary to the north, Bulgaria and Romania to the east, and Albania and Greece to the south. The nation was a socialist state and a federation governed by the League of Communists of Yugoslavia and made up of six socialist republics – Bosnia and Herzegovina, Croatia, Macedonia, Montenegro, Serbia, and Slovenia – with Belgrade as its capital. In addition, it included two autonomous provinces within Serbia: Kosovo and Vojvodina. The SFRY's origin is traced to 26 November 1942, when the Anti-Fascist Council for the National Liberation of Yugoslavia was formed during World War II. 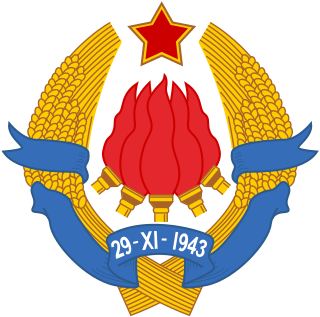 The Anti-Fascist Council for the National Liberation of Yugoslavia, known more commonly by its Yugoslav abbreviation AVNOJ, was the political umbrella organization for the national liberation councils of the Yugoslav resistance against the Axis occupation during World War II. It eventually became the Yugoslav provisional wartime deliberative body. It was established on November 26, 1942, to administer territories under the control of the Partisans.

The Tito–Šubašić Agreements was an attempt by the Western Powers to merge the royal Yugoslav government-in-exile with the Communist-led Partisans who were fighting the Axis occupation of Yugoslavia in the Second World War and were de facto rulers on the liberated territories.

Marshal of Yugoslavia was the highest rank of the Yugoslav People's Army, and, simultaneously, a Yugoslav honorific title.

The Prime Minister of Yugoslavia was the head of government of the Yugoslav state, from the creation of the Kingdom of Serbs, Croats and Slovenes in 1918 until the breakup of the Socialist Federal Republic of Yugoslavia in 1992.

World War II military operations in Yugoslavia began on 6 April 1941, when the Kingdom of Yugoslavia was swiftly conquered by Axis forces and partitioned between Germany, Italy, Hungary, Bulgaria and client regimes. Subsequently, a guerrilla liberation war was fought against the Axis occupying forces and their locally established puppet regimes, including the fascist Independent State of Croatia and the Government of National Salvation in the German-occupied territory of Serbia, by the communist-led republican Yugoslav Partisans. Simultaneously, a multi-side civil war was waged between the Yugoslav communist Partisans, the Serbian royalist Chetniks, the Croatian fascist Ustashe and Home Guard, Serbian Volunteer Corps and State Guard, as well as Slovene Home Guard troops.

Alojzij Kuhar was a Slovenian and Yugoslav politician, diplomat, historian and journalist. Together with Izidor Cankar and Franc Snoj, he was an important exponent of the liberal conservative fraction of the Slovene People's Party.

The National Committee for the Liberation of Yugoslavia or NKOJ, was the World War II provisional executive body of the Democratic Federal Yugoslavia. The NKOJ was elected by the AVNOJ during its Second Session in Jajce in late November 1943. During the Session, the AVNOJ also appointed Josip Broz Tito the Prime Minister in the NKOJ. 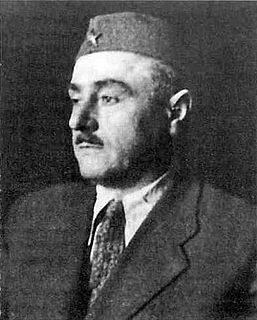 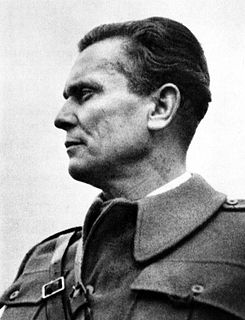 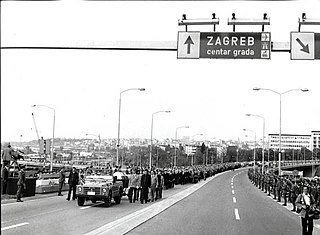 The funeral of Josip Broz Tito, President of Yugoslavia, was held on 8 May 1980, four days after his death on 4 May. His funeral drew many world statesmen, both of non-aligned and aligned countries. Based on the number of attending politicians and state delegations, it is the largest state funeral in history. This included four kings, 31 presidents, six princes, 22 prime ministers, and 47 ministers of foreign affairs, from both sides of the Iron Curtain and beyond. In total, 128 countries out of the 154 UN members at the time were represented.. Also present were delegates from seven multilateral organizations, six movements and 40 political parties.

Drago Marušič was a Slovenian and Yugoslav politician and jurist.

The Ba Congress, also known as the Saint Sava Congress or Great People's Congress, was a meeting of representatives of Draža Mihailović's Chetnik movement between 25 and 28 January 1944 in the village of Ba in the German-occupied territory of Serbia during World War II. The congress aimed to advance a political alternative to the November 1943 Second Session of the communist-led Anti-Fascist Council for the National Liberation of Yugoslavia of the Yugoslav Partisans. The Second Session of AVNOJ had resolved that post-war Yugoslavia would be a federal republic, based on six constituent republics, Bosnia and Herzegovina, Croatia, Macedonia, Montenegro, Serbia and Slovenia, with equal rights. Along with this resolution, AVNOJ had asserted that it was the sole legitimate government of Yugoslavia, and denied the right of King Peter II to return from exile before a popular referendum to determine the future of his rule. In December, the major Allied powers met at Tehran and decided to provide their exclusive support to the Partisans and withdraw support from the Chetniks.