This type of photography is colloquially known as "cheesecake" for women and "beefcake" for men. [3] [4]

Glamour photography is generally a composed image of a subject in a still position. The subjects of "glamour" photography for professional use are often professional models, and the photographs are normally intended for commercial use, including mass-produced calendars, pinups and men's magazines such as Maxim ; but amateur subjects are also sometimes used, and sometimes the photographs are intended for private and personal use only. Photographers use a combination of cosmetics, lighting and airbrushing techniques to produce an appealing image of the subject. [5] [6]

The "British Queen of Curves" in the 1950s and early sixties was Pamela Green. Harrison Marks, on the encouragement of Green, took up glamour photography and together in 1957 they published the pinup magazine Kamera. [7] Currently in England the earliest use of the word glamour as a euphemism for nude modeling or photography is attributed to Marks' publicity material in 1950s. [8]

Glamour models popular in the early 1990s included Hope Talmons and Dita Von Teese and the modern era is represented in the U.S. by models like Heidi Van Horne and Bernie Dexter, while leading representatives of the genre in the UK include Katie Price and Lucy Pinder.[ clarification needed ]

Standards and styles of glamour photography change over time, reflecting for example changes in social acceptance and taste. In the early 1920s, United States photographers like Ruth Harriet Louise and George Hurrell photographed celebrities to glamorize their stature by utilizing lighting techniques to develop dramatic effects. [9] [10]

Until the 1950s, glamour photography in advertising and in men's magazines was highly controversial or even illegal.[ citation needed ] In some countries, if not illegal, such magazines could not be on public display, and some had to be displayed in a plastic cover. Magazines featuring glamour photography were sometimes marketed as "art magazines" or "health magazines".

Since the 1990s glamour photography has increased in popularity among the public. Glamour portrait studios have opened, offering professional hair and makeup artists and professional retouching to allow the general public to have the "model" experience. These sometimes include boudoir portraits but are more commonly used by professionals and high school seniors who want to look their best for their portraits.

Suze Randall is an English model, photographer, and pornographer.

Betty Mae Page, known professionally as Bettie Page, was an American model who gained a significant profile in the 1950s for her pin-up photos. Often referred to as the "Queen of Pinups", her shoulder-length jet-black hair, blue eyes, and trademark bangs have influenced artists for generations.

A pin-up model is a model whose mass-produced pictures see wide appeal as popular culture. Pin-up models may today be referred to as glamour models, fashion models, or actors. Pin-ups are intended for informal display, i.e. meant to be "pinned-up" on a wall, the etymology of the phrase. These pictures are also sometimes known as cheesecake photos. Cheesecake was an American slang word that was considered a publicly acceptable term for semi-nude women because pin-up was considered taboo in the early 20th century.

Beefcake is a performance or a form of glamour photography depicting a large and muscular male body. Beefcake is also a publication genre. A role a person plays in a performance may be called beefcake. The term was believed to be first used by Hollywood columnist Sidney Skolsky.

George Harrison Marks was an English glamour photographer and director of nudist, and later, pornographic films.

George Edward Hurrell was a photographer who contributed to the image of glamour presented by Hollywood during the 1930s and 1940s. 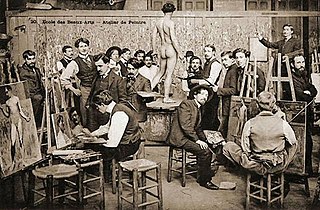 Peter A. Gowland was a famous American glamour photographer and actor. He was known for designing and building his own studio equipment and was active professionally for six decades. 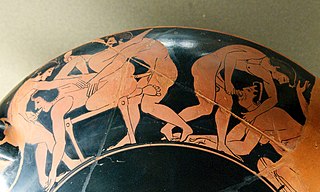 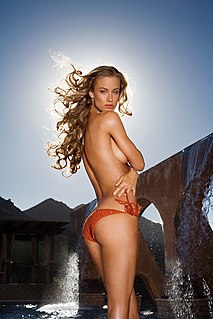 A handbra is a technique used by actresses, models and other entertainers to cover their nipples and areolae with their own hands to comply with censors' guidelines, public authorities and community standards when female breasts are required to be covered in film or other media. If the arms are used instead of the hands the expression is arm bra. The use of long hair for this purpose is called a hair bra.

Boudoir photography, or sensual photography, is a photographic style featuring intimate, sensual, romantic, and sometimes erotic images of its subjects in a photographic studio, bedroom or private dressing room environment, primarily intended for the private enjoyment of the subject and his or her romantic partners. It is distinct from glamour and art nude photography in that it is usually more suggestive rather than explicit in its approach to nudity and sexuality, features subjects who do not regularly model, and produces images that are not intended to be seen by a wide audience, but rather to remain under the control of the subject. 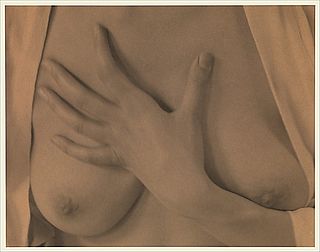 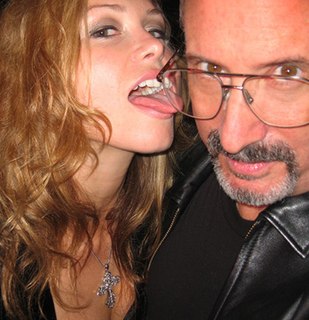