In United States telecommunication law, the Modification of Final Judgment (MFJ) is the August 1982 consent decree concerning the American Telephone & Telegraph Company (AT&T) and its subsidiaries. The terms required the Bell System divestiture — removing local telephone service from AT&T control and putting business restrictions on the divested local telephone companies — in exchange for removing other longstanding restrictions on what businesses AT&T could control. [1] :125

The decree was made with Harold H. Greene as presiding judge. [4]

GTE Corporation, formerly General Telephone & Electronics Corporation (1955–1982), was the largest independent telephone company in the United States during the days of the Bell System. The company operated from 1926, with roots tracing further back than that, until 2000, when it was acquired by Bell Atlantic; the combined company took the name Verizon.

United States v. Microsoft Corporation, 253 F.3d 34, was a noted American antitrust law case in which the U.S. government accused Microsoft of illegally maintaining its monopoly position in the PC market primarily through the legal and technical restrictions it put on the abilities of PC manufacturers (OEMs) and users to uninstall Internet Explorer and use other programs such as Netscape and Java. At trial, the district court ruled that Microsoft's actions constituted unlawful monopolization under Section 2 of the Sherman Antitrust Act of 1890, and the U.S. Court of Appeals for the D.C. Circuit affirmed most of the district court's judgments.

A common carrier in common law countries is a person or company that transports goods or people for any person or company and is responsible for any possible loss of the goods during transport. A common carrier offers its services to the general public under license or authority provided by a regulatory body, which has usually been granted "ministerial authority" by the legislation that created it. The regulatory body may create, interpret, and enforce its regulations upon the common carrier with independence and finality as long as it acts within the bounds of the enabling legislation.

Bell Canada is a Canadian telecommunications company headquartered at 1 Carrefour Alexander-Graham-Bell in Montreal, Quebec, Canada. It is an ILEC in the provinces of Ontario and Quebec and as such, was a founding member of the Stentor Alliance. It is also a CLEC for enterprise customers in the western provinces.

The Pacific Bell Telephone Company is a telephone company that provides telephone service in California. The company is owned by AT&T Inc. through AT&T Teleholdings, and, though separate, is now marketed as “AT&T”. The company has been known by a number of names during which its service area has changed. The formal name of the company from the 1910s through the 1984 Bell System divestiture was The Pacific Telephone and Telegraph Company. As of 2002, the name “Pacific Bell” is no longer used in marketing, Pacific Bell is still the holder of record for the infrastructure of cables and fiber through much of California.

A consent decree is an agreement or settlement that resolves a dispute between two parties without admission of guilt or liability, and most often refers to such a type of settlement in the United States. The plaintiff and the defendant ask the court to enter into their agreement, and the court maintains supervision over the implementation of the decree in monetary exchanges or restructured interactions between parties. It is similar to and sometimes referred to as an antitrust decree, stipulated judgment, or consent judgment. Consent decrees are frequently used by federal courts to ensure that businesses and industries adhere to regulatory laws in areas such as antitrust law, employment discrimination, and environmental regulation. 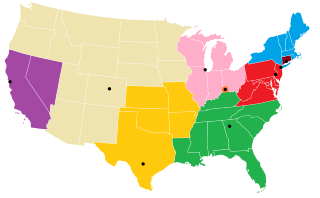 The breakup of the Bell System was mandated on January 8, 1982 by an agreed consent decree providing that AT&T Corporation would, as had been initially proposed by AT&T, relinquish control of the Bell Operating Companies that had provided local telephone service in the United States and Canada up until that point. This effectively took the monopoly that was the Bell System and split it into entirely separate companies that would continue to provide telephone service. AT&T would continue to be a provider of long-distance service, while the now-independent Regional Bell Operating Companies (RBOCs) would provide local service, and would no longer be directly supplied with equipment from AT&T subsidiary Western Electric.

Community for Creative Non-Violence v. Reid, 490 U.S. 730 (1989), is a US copyright law and labor law case of a United States Supreme Court case regarding ownership of copyright.

Texaco Inc. v. Dagher, 547 U.S. 1 (2006), was a decision by the Supreme Court of the United States involving the application of U.S. antitrust law to a joint venture between oil companies to market gasoline to gas stations. The Court ruled unanimously that the joint venture's unified price for the two companies' brands of gasoline was not a price-fixing scheme between competitors in violation of the Sherman Antitrust Act. The Court instead considered the joint venture a single entity that made pricing decisions, in which the oil companies participated as cooperative investors.

United States v. AT&T was the antitrust case in the United States that led to the 1984 Bell System divestiture, the breakup of the old American Telephone & Telegraph into the new, seven regional Bell operating companies (RBOC)s and the much smaller new AT&T.

The Bell System was the system of companies, led by the Bell Telephone Company and later by AT&T, which dominated the telephone services industry in North America for 100 years from its creation in 1877 until its demise in the early 1980s. The system of companies was often colloquially called Ma Bell, as it held a near-complete monopoly over telephone service in most areas of the United States and Canada. At the time of its breakup in the early 1980s, the Bell System had assets of $150 billion and employed over one million people.

The Telephone Cases, 126 U.S. 1 (1888), were a series of U.S. court cases in the 1870s and 1880s related to the invention of the telephone, which culminated in the 1888 decision of the United States Supreme Court upholding the priority of the patents belonging to Alexander Graham Bell. Those telephone patents were relied on by the American Bell Telephone Company and the Bell System—although they had also acquired critical microphone patents from Emile Berliner.