All trains stop at every station on their route. Most trains operate between Taishō and Kadoma-minami; trains also operate shortened services which run from Taishō to either Shinsaibashi or Yokozutsumi during events held at Osaka Dome. Trains run every 2–4 minutes during peak hours, and every 7 minutes during off-peak hours.

Trains are automatically driven using ATO with a single driver on board to open and close the doors and to manually drive the train in emergency situations or when ATO breaks down or is not available. All trains are stored at Tsurumi-ryokuchi-kita depot (on the Imazatosuji Line) and maintained at Tsurumi workshop.

The line is named after Nagahori-dori, a major avenue which it follows through central Osaka, and the Tsurumi-ryokuchi, a park in northeastern Osaka which hosted the International Flower and Greenery Exposition in 1990. The line was built not only to provide access to the park during the exhibition, but also to relieve congestion from the Chūō Line. Its first segment opened on March 31, 1990 between Kyōbashi and Tsurumi-ryokuchi, at which time it was called the Tsurumi-ryokuchi Line (鶴見緑地線).[ citation needed ]

Under its original plan, the line would have provided access to the Osaka prefectural government offices near Osaka Castle. However, the presence of underground artifacts around the castle area made this plan impractical, and the line was thus shifted farther south, which also provided a better connection with the Chūō Line. On December 11, 1996, the line was opened as far as Shinsaibashi in downtown Osaka, and renamed the Nagahori Tsurumi-ryokuchi Line.[ citation needed ]

On August 29, 1997, the line was further extended westward to Taishō and eastward to Kadoma-minami.[ citation needed ]

Over the course of fiscal 2010, the 16 stations within Osaka City were outfitted with automatic platform gates, similar to those already in use on the Imazatosuji Line. At Taishō, the first station to be so equipped, the gates started operation on July 7, 2010. The final station, Kadoma-minami, had them installed over the course of October 2011, with operation starting on October 31. [2] 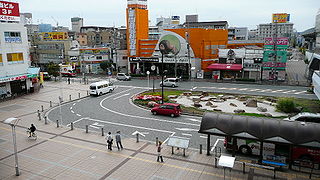 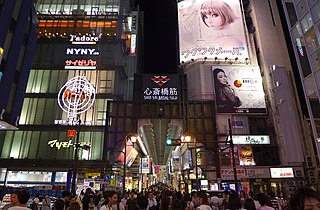 Shinsaibashi (心斎橋) is a district in the Chūō-ku ward of Osaka, Japan and the city's main shopping area. At its center is Shinsaibashi-suji (心斎橋筋), a covered shopping street, that is north of Dōtonbori and Sōemonchō, and parallel and east of Mido-suji street. Associated with Shinsaibashi, and west of Mido-suji street, is Amerika-mura, an American-themed shopping area and center of Osaka's youth culture. Major stores and boutiques concentrates are found around the area. Shinsaibashi is easily accessed via the subway.

Shinsaibashi Station is a metro station on the Osaka Metro located in Shinsaibashi, Chūō-ku, Osaka, Japan. 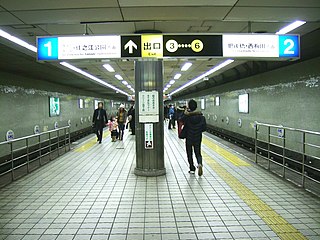 Yotsubashi Station is a railway station on the Osaka Metro Yotsubashi Line in Nishi-ku, Osaka, Japan.

Nagahoribashi Station is a railway station on the Osaka Metro in Chūō-ku, Osaka, Japan. It is very close to Shinsaibashi Station, within a five minute walk. 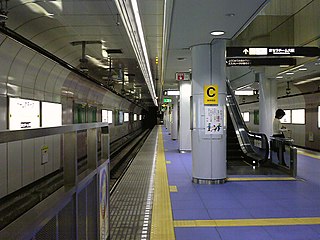 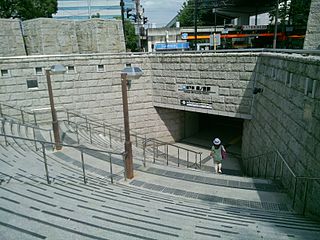 Morinomiya Station is a railway and subway station in Chūō-ku, Osaka, Japan.

The Osaka Metro Imazatosuji Line is a rapid transit line of Osaka Metro, running from Itakano Station in Higashiyodogawa-ku to Imazato Station in Higashinari-ku, all within Osaka city. Its official name is Rapid Electric Tramway Line No. 8 (高速電気軌道第8号線), and in MLIT publications, it is written as Line No. 8 . Station numbers are indicated by the letter I. The line first opened, at its present length, on Christmas Eve 2006. 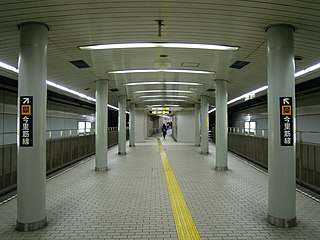 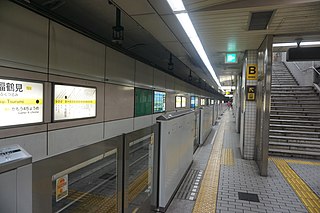 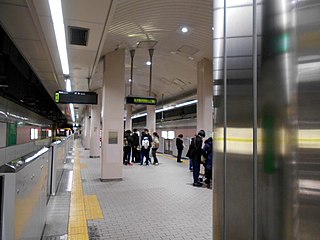 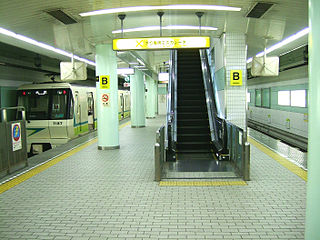 Kadoma-minami Station is the terminus of the Osaka Metro Nagahori Tsurumi-ryokuchi Line in Kadoma, Osaka, Japan. 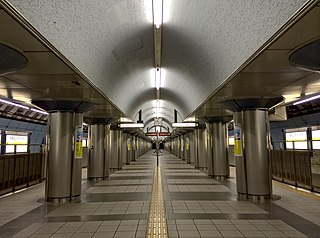 Osaka Business Park Station is a metro station on the Osaka Metro Nagahori Tsurumi-ryokuchi Line in Chūō-ku, Osaka, Japan. With a depth of 32.3 m (106 ft), it is the deepest station in the Osaka subway system. 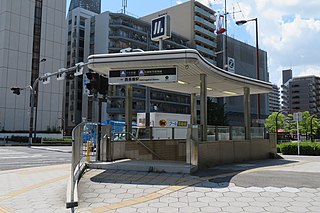 Nishi-Nagahori Station is a railway station on the Osaka Metro Nagahori Tsurumi-ryokuchi Line and Sennichimae Line in Nishi-ku, Osaka, Japan.

Osaka Municipal Subway Line 9 is a planned, but as-yet unbuilt, rapid transit line that would run from Suminoekōen in Suminoe-ku to Kire-Uriwari in Hirano-ku within the city of Osaka. While no timetable has been announced for its construction, it has the provisional name "Shikitsu-Nagayoshi Line" (敷津長吉線).