The Oulad Abdoun Basin (also known as the Ouled Abdoun Basin or Khouribga Basin) is a phosphate sedimentary basin located in Morocco, near the city of Khouribga. It is the largest in Morocco, comprising 44% of Morocco's phosphate reserves, and at least 26.8 billion tons of phosphate. [1] [2] It is also known as an important site for vertebrate fossils, with deposits ranging from the Late Cretaceous (Cenomanian-Turonian) to the Eocene epoch (Ypresian), a period of about 25 million years. [3]

The Oulad Abdoun Basin stretches from late Cretaceous to the Eocene, and contains abundant marine vertebrate fossils, including sharks, bony fish, turtles, crocodilians, and other reptiles, as well as sea birds and a small number of terrestrial mammals. [3] [4]

Bird fossils are common in the Basin, which includes the oldest birds in Africa. [4] At least three orders and several families of sea birds are represented, including Procellariiformes (albatrosses and petrels, fossils assignable to Diomedeidae and Procellariidae), Pelecaniformes (pelicans and allies, fossils assignable to Phaethontidae, Prophaethontidae, Fregatidae and Pelagornithidae), and Anseriformes (waterfowl, including fossil Presbyornithidae). [4]

The Halisaurinae are a subfamily of mosasaurs, a group of Late Cretaceous marine lizards. They were small to medium-sized, ranging from just under 3 meters in Eonatator sternbergi to as much as 8 or 9 meters in Pluridens serpentis. They tended to have relatively slender jaws and small, numerous teeth, suggesting a diet of small fish and other prey. Although the skeleton is primitive compared to other Mosasauridae in many respects, halisaurines had the distinctive hypocercal tail of other mosasaurids suggesting good swimming ability, and they persisted alongside other mosasaurs until the end of the Cretaceous. The earliest known remains of halisaurines occur in rocks of Santonian age and the subfamily persists until the latest Maastrichtian. Halisaurines are known from North and South America, Europe, Asia and Africa, indicating a more or less global distribution in the Late Cretaceous. Four genera are currently recognized: Eonatator, Halisaurus, Phosphorosaurus and Pluridens.

Numidotheriidae is an extinct family of primitive proboscidean that lived from the late Paleocene to the early Oligocene periods of North Africa.

Daouitherium is an extinct genus of early proboscideans that lived during the early Eocene some 55 million years ago in North Africa. 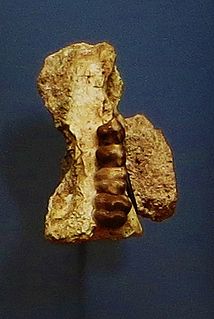 Phosphatherium escuillei is a basal proboscidean that lived from the Late Paleocene to the early stages of the Ypresian age until the early Thanetian some 56 million years ago in North Africa. Research has suggested that Phosphatherium existed during the Eocene period.

Phosphatodraco is a genus of azhdarchid pterosaur that lived during the Late Cretaceous of what is now Morocco. In 2000, a pterosaur specimen consisting of five cervical (neck) vertebrae were discovered in the Ouled Abdoun Phosphatic Basin, where phosphate is quarried. The specimen was made the holotype of the new genus and species Phosphatodraco mauritanicus in 2003; the genus name means "dragon from the phosphates", and the specific name refers to the region of Mauretania, Latin for North Africa. Phosphatodraco was the first Late Cretaceous pterosaur known from North Africa, and the second pterosaur genus described from Morocco. It was one of the only known azhdarchids preserving a relatively complete neck, and was one of the last known pterosaurs. Additional cervical vertebrae have since been assigned to the genus, and it has been suggested that fossils of the pterosaur Tethydraco represent wing-elements of Phosphatodraco. 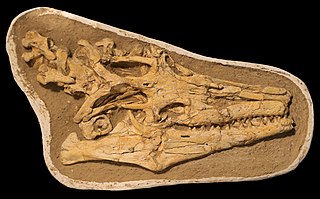 Pluridens is an extinct genus of marine lizard belonging to the Mosasauridae. Pluridens is placed in the subfamily Halisaurinae with the genera Phosphorosaurus, Eonatator and Halisaurus. Compared to related halisaurines, Pluridens had longer jaws with more teeth, and smaller eyes. It also grew large size, perhaps 8 or 9 meters in some individuals. The jaws in some specimens are robust, and sometimes show injuries suggestive of combat. The jaws may have been used for fighting over mates or territories.

Ocepesuchus is an extinct genus of gavialoid crocodilian, related to modern gharials. It lived in the Late Cretaceous of Morocco. Described by Jouve and colleagues in 2008, the type species is O. eoafricanus, with the specific name meaning "dawn African" in reference to its great age relative to other African crocodilians. Ocepesuchus had a long snout with a tubular shape, wider than high. It is the oldest known true crocodilian from Africa.

Eromangasaurus is an extinct genus of elasmosaurid known from northern Queensland of Australia.

Zarafasaura is an extinct genus of elasmosaurid known from the Oulad Abdoun Basin of Morocco. 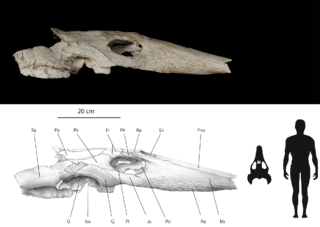 Ocepechelon is an extinct genus of giant protostegid sea turtle known from Late Cretaceous phosphatic deposits of the Oulad Abdoun Basin, Khouribga Province of Morocco. It is known from the holotype OCP DEK/GE 516, a complete but isolated 70-cm-long skull, making it one of the largest marine turtles ever described. It was first named by Nathalie Bardet, Nour-Eddine Jalil, France de Lapparent de Broin, Damien Germain, Olivier Lambert and Mbarek Amaghzaz in 2013 and the type species is Ocepechelon bouyai. The feeding apparatus of Ocepechelon, a bony pipette-like snout, is unique among tetrapods and shares unique convergences with both syngnathid fishes and beaked whales. 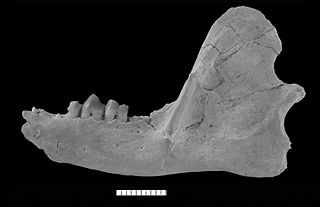 Abdounodus is an extinct genus of mammal known from the middle Paleocene of northern Africa. The sole species, A. hamdii, is known from teeth discovered in the Ouled Abdoun Basin of present-day Morocco in 2001. Traditionally considered a mioclaenid "condylarth", recent studies place it as a basal afrothere closely related to Ocepeia, demonstrating the close convergent evolution between perissodactyls and herbivorous afrotheres and bridging paenungulates with other afrotheres.

Chenanisaurus is a genus of predatory abelisaurid dinosaur, with a single known species C. barbaricus. It comes from the upper Maastrichtian phosphates of the Ouled Abdoun Basin in Morocco, North Africa. The animal is known from a holotype, consisting of a partial jaw bone, and several isolated teeth found in the same beds. Chenanisaurus is one of the largest members of the Abelisauridae, and one of the last, being a contemporary of the North American Tyrannosaurus. It would have been among the dinosaur species wiped out by the Chicxulub asteroid impact and the Cretaceous-Paleogene mass extinction that followed. 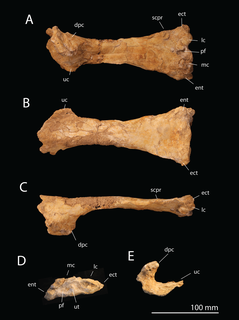 Tethydraco is a genus of pterodactyloid pterosaur that lived during the Late Cretaceous period of what is now the area of present Morocco, about 66 million years ago. Tethydraco was originally assigned to the family Pteranodontidae. Subsequently described material suggested that it was an azhdarchid, and possibly synonymous with Phosphatodraco. The type and only species is T. regalis.

Simurghia is a genus nyctosaurid pterosaur from the Ouled Abdoun Basin of Morocco, a basin that dates to the Maastrichtian stage of the Late Cretaceous period, about 66 million years ago. It was published in 2018 by paleontologists Nicholas R. Longrich, David M. Martill, and Brian Andres, along with two other nyctosaurids from the same basin: Alcione and Barbaridactylus. The type and only species is S. robusta. 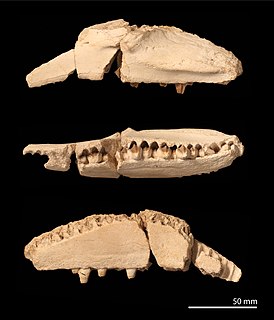 Ajnabia is a genus of lambeosaurine hadrosaur from the Late Cretaceous (Maastrichtian) of Morocco. It is the first definitive hadrosaur from Africa, and is thought to be related to European dinosaurs like Arenysaurus. The discovery of Ajnabia came as a surprise to the paleontologists who found it, because Africa was isolated by water from the rest of the world during the Cretaceous, such that hadrosaurs were assumed to have been unable to reach the continent. The animal is relatively small; assuming it represents an adult it would be one of the smallest if not the smallest known hadrosaurids.

Xenodens is an extinct genus of marine lizard belonging to the mosasaur family. It currently contains a single species, X. calminechari, which is known from Late Maastrichtian phosphate deposits in the Ouled Abdoun Basin, Morocco. Its closest known relative is believed to be the durophagous Carinodens. 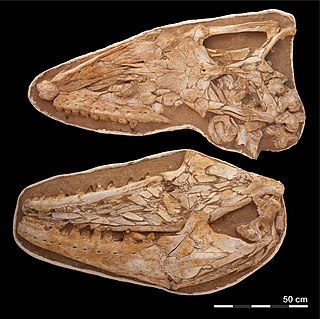 Thalassotitan is an extinct genus of mosasaur that lived in Morocco during the late Maastrichtian of the Cretaceous period, around 66 million years ago. The mosasaur's remains were found in the Ouled Abdoun Basin, where many other mosasaurs have been found. This mosasaur was described in 2022 and was assigned to the tribe Prognathodontini alongside other mosasaurs like Prognathodon. The prognathodontine mosasaurs are separated from other mosasaurs based on their massive jaws and robust teeth. This genus shows definitely that mosasaurs evolved to take over the apex predator niche in the oceans of the late Cretaceous which is now filled by sharks and orcas. Heavy wear on its teeth and fossils found in the vicinity of the holotype etched by acid wear from partial digestion suggest this mosasaur had a diet consisting of smaller mosasaur species, plesiosaurs, large predatory fish, and sea turtles.