Buddhists take refuge in the Three Jewels or Triple Gem (also known as the "Three Refuges").

The Three Jewels are:

The chant goes in the ancient Pali language goes: [2]

Sangham saranam gacchami. “I take refuge in the Sangha.”

Faith is an important teaching element in both Theravada and Mahayana traditions. In contrast to perceived Western notions of faith, faith in Buddhism arises from accumulated experience and reasoning.

In the Kalama Sutra , the Buddha explicitly argues against simply following authority or tradition, particularly those of religions contemporary to the Buddha's time. [3] There remains value for a degree of trusting confidence and belief in Buddhism, primarily in the spiritual attainment and salvation or enlightenment. Faith in Buddhism centres on belief in the Three Jewels.

Lay followers often undertake five precepts in the same ceremony as they take the refuges. [4] [5] Monks administer the precepts to the laypeople, which creates an additional psychological effect. [6] The five precepts are:

In Early Buddhist Texts, the role of the five precepts gradually developed. First of all, the precepts were combined with a declaration of faith in the triple gem (the Buddha, his teaching and the monastic community). Next, the precepts developed to become the foundation of lay practice. [10] The precepts were seen as a preliminary condition for the higher development of the mind. [11] At a third stage in the texts, the precepts were actually mentioned together with the triple gem, as though they were part of it. Lastly, the precepts, together with the triple gem, became a required condition for the practice of Buddhism, as lay people had to undergo a formal initiation to become a member of the Buddhist religion. [12] When Buddhism spread to different places and people, the role of the precepts began to vary. In countries in which Buddhism was adopted as the main religion without much competition from other religious disciplines, such as Thailand, the relation between the initiation of a lay person and the five precepts has been virtually non-existent, and the taking of the precepts has become a sort of ritual cleansing ceremony. In such countries, people are presumed Buddhist from birth without much of an initiation. The precepts are often committed to by new followers as part of their installment, yet this is not very pronounced. However, in some countries like China, where Buddhism was not the only religion, the precepts became an ordination ceremony to initiate lay people into the Buddhist religion. [13]

A layperson who upholds the precepts is described in the texts as a "jewel among laymen". [14]

In Tibetan Buddhism there are three refuge formulations, the Outer, Inner, and Secret forms of the Three Jewels. The 'Outer' form is the 'Triple Gem', (Sanskrit:triratna), the 'Inner' is the Three Roots and the 'Secret' form is the 'Three Bodies' or trikaya of a Buddha. These alternative refuge formulations are employed by those undertaking Deity Yoga and other tantric practices within the Tibetan Buddhist Vajrayana tradition as a means of recognizing Buddha Nature.

Three refuge motivation levels are: 1) suffering rebirth's fear motivates with the idea of happiness, 2) knowing rebirth won’t bring freedoms motivated by attaining nirvana, while 3) seeing others' suffering motivates establishing them all in Buddhahood. [16] Happiness is temporary, lifetimes are impermanent and ultimately refuge is taken until reaching unsurpassed awakening. [17] [ clarification needed ] 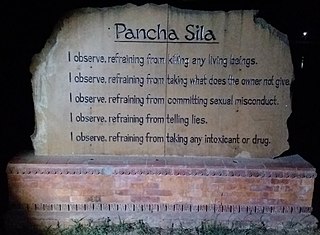 The Five precepts or five rules of training is the most important system of morality for Buddhist lay people. They constitute the basic code of ethics to be undertaken by lay followers of Buddhism. The precepts are commitments to abstain from killing living beings, stealing, sexual misconduct, lying and intoxication. Within the Buddhist doctrine, they are meant to develop mind and character to make progress on the path to enlightenment. They are sometimes referred to as the Śrāvakayāna precepts in the Mahāyāna tradition, contrasting them with the bodhisattva precepts. The five precepts form the basis of several parts of Buddhist doctrine, both lay and monastic. With regard to their fundamental role in Buddhist ethics, they have been compared with the ten commandments in Abrahamic religions or the ethical codes of Confucianism. The precepts have been connected with utilitarianist, deontological and virtue approaches to ethics, though by 2017, such categorization by western terminology had mostly been abandoned by scholars. The precepts have been compared with human rights because of their universal nature, and some scholars argue they can complement the concept of human rights.

Sangha is a Sanskrit word used in many Indian languages, including Pali (saṅgha) meaning "association", "assembly", "company" or "community". It was historically used in a political context to denote a governing assembly in a republic or a kingdom. It is used in modern times by groups such as the political party and social movement Rashtriya Seva Sangh. It has long been commonly used by religious associations including by Buddhists, Jains and Sikhs.

Anagārika Dharmapāla was a Sri Lankan (Sinhalese) Buddhist revivalist and a writer. He was the first global Buddhist missionary. He was one of the founding contributors of non-violent Sinhalese Buddhist nationalism and a leading figure in the Sri Lankan independence movement against British rule. He was also a pioneer in the revival of Buddhism in India after it had been virtually extinct there for several centuries, and he was the first Buddhist in modern times to preach the Dharma in three continents: Asia, North America, and Europe. Along with Henry Steel Olcott and Helena Blavatsky, the creators of the Theosophical Society, he was a major reformer and revivalist of Sinhala Buddhism and an important figure in its western transmission. He also inspired a mass movement of South Indian Dalits including Tamils to embrace Buddhism, half a century before B. R. Ambedkar. At the latter stages of his life, he entered the order of Buddhist monks as Venerable Sri Devamitta Dharmapala.

The Triratna is a Buddhist symbol, thought to visually represent the Three Jewels of Buddhism.

Upāsaka (masculine) or Upāsikā (feminine) are from the Sanskrit and Pāli words for "attendant". This is the title of followers of Buddhism who are not monks, nuns, or novice monastics in a Buddhist order, and who undertake certain vows. In modern times they have a connotation of dedicated piety that is best suggested by terms such as "lay devotee" or "devout lay follower".

Buddhist ethics are traditionally based on what Buddhists view as the enlightened perspective of the Buddha, or other enlightened beings such as Bodhisattvas. The Indian term for ethics or morality used in Buddhism is Śīla or sīla (Pāli). Śīla in Buddhism is one of three sections of the Noble Eightfold Path, and is a code of conduct that embraces a commitment to harmony and self-restraint with the principal motivation being nonviolence, or freedom from causing harm. It has been variously described as virtue, moral discipline and precept.

The Basic Points Unifying the Theravāda and the Mahāyāna is an important Buddhist ecumenical statement created in 1967 during the First Congress of the World Buddhist Sangha Council (WBSC), where its founder Secretary-General, the late Venerable Pandita Pimbure Sorata Thera, requested the Ven. Walpola Rahula to present a concise formula for the unification of all the different Buddhist traditions. This text was then unanimously approved by the Council.

In Buddhism, the eight precepts is a list of precepts that are observed by lay devotees on observance days and festivals. They include general precepts such as refraining from killing, but also more specific ones, such as abstaining from cosmetics. Based on pre-Buddhist sāmaṇa practices, the eight precepts are often upheld on the Buddhist observance days, and in such context called the uposatha vows or one-day precepts. They are considered to support meditation practice, and are often observed when staying in monasteries and temples. In some periods and places the precepts were widely observed, such as in 7th–10th-century China by government officials. In modern times, there have been revival movements and important political figures that have observed them continuously.

In English translations of Buddhist texts, householder denotes a variety of terms. Most broadly, it refers to any layperson, and most narrowly, to a wealthy and prestigious familial patriarch. In contemporary Buddhist communities, householder is often used synonymously with laity, or non-monastics.

The Uposatha is a Buddhist day of observance, in existence from the Buddha's time, and still being kept today by Buddhist practitioners. The Buddha taught that the Uposatha day is for "the cleansing of the defiled mind," resulting in inner calm and joy. On this day, both lay and ordained members of the sangha intensify their practice, deepen their knowledge and express communal commitment through millennia-old acts of lay-monastic reciprocity. On these days, the lay followers make a conscious effort to keep the Five Precepts or the eight precepts. It is a day for practicing the Buddha's teachings and meditation. 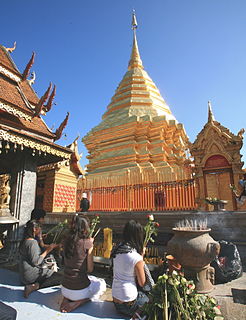 In Buddhism, symbolic offerings are made to the Triple Gem, giving rise to contemplative gratitude and inspiration. Typical material offerings involve simple objects such as a lit candle or oil lamp, burning incense, flowers, food, fruit, water or drinks.

The Dighajanu Sutta, also known as the Byagghapajja Sutta or Vyagghapajja Sutta, is part of the Anguttara Nikaya. For Theravadin scholars, this discourse of the Pāli Canon is one of several considered key to understanding Buddhist lay ethics. In this discourse, the Buddha instructs a householder named Dīghajāṇu Vyagghapajja, a Koliyan householder, on eight personality traits or conditions that lead to happiness and well-being in this and future lives.

Devotion, a central practice in Buddhism, refers to commitment to religious observances or to an object or person, and may be translated with Sanskrit or Pāli terms like saddhā, gārava or pūjā. Central to Buddhist devotion is the practice of Buddhānussati, the recollection of the inspiring qualities of the Buddha. Although buddhānussati had been an important aspect of practice since the early period of Buddhism, its importance was amplified with the arising of Mahāyāna Buddhism. Specifically, with Pure Land Buddhism, many forms of devotion were developed to recollect and connect with the celestial Buddhas, especially Amitābha.

If one, longing for sensual pleasure, achieves it, yes, he's enraptured at heart. The mortal gets what he wants. But if for that person — longing, desiring — the pleasures diminish, he's shattered, as if shot with an arrow.

Dhammacari is a term used in some Theravada Buddhist communities to refer to lay devotees (upāsakas) who have seriously committed themselves to Buddhist practice for several years. Dhammacaris follow four training vows in addition to the traditional Five Precepts that all lay devotees follow.