Tompkins Circle is named in honor of prominent Staten Island resident Daniel D. Tompkins (1774-1825), who owned property in this neighborhood. A more recent resident of Ward Hill was Joe Marotta (1942-2008), a civic activist who served on several community planning boards and operated a pharmacy in Tompkinsville. Following his death in November 2008, a bench was dedicated at this park in his memory. [4] 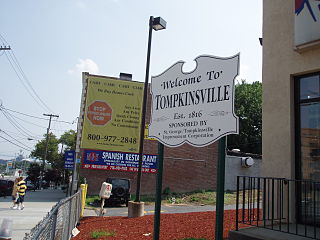 Tompkinsville is a neighborhood in northeastern Staten Island in New York City in the United States. Though the neighborhood sits on the island's eastern shore, along the waterfront facing Upper New York Bay — between St. George on the north and Stapleton on the south — it is reckoned as being part of the North Shore by the island's residents.

Clifton is a neighborhood on the North Shore of Staten Island in New York City, United States. It is an older waterfront neighborhood, facing Upper New York Bay on the east. It is bordered on the north by Stapleton, on the south by Rosebank, on the southwest by Concord, and on the west by Van Duzer Street.

Stapleton Heights is a neighborhood in northeastern Staten Island, New York, part of New York City in the United States. It stands on the second of a series of hills that form a "backbone" which runs diagonally across the island from northeast to southwest, between Ward Hill and Grymes Hill; to the east is Stapleton, which is along the waterfront. It is an upper-middle-class enclave noted for its large older one-family homes, and for its view of Upper New York Bay and the Verrazano Narrows Bridge. Many of the grander homes of the neighborhood were constructed in the late 19th century by the families who controlled the industries along the waterfront, including the breweries that operated there until the last one closed in 1963. One such home, on Louis Street, is allegedly "haunted," according to local residents. 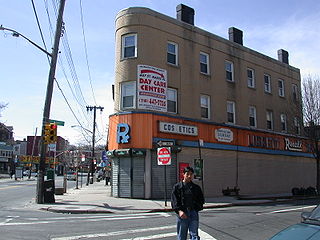 Huguenot is the name of a neighborhood located on the South Shore of Staten Island, New York City. Originally named "Bloomingview", its present name is derived from the Huguenots, led by Daniel Perrin, who settled in the area during the late 17th and early 18th centuries to escape religious persecution.

Bulls Head is a neighborhood in west-central Staten Island, one of the five boroughs of New York City. It is bordered by New Springville to the south, Bloomfield to the west, Willowbrook to the east, Graniteville to the north, and Westerleigh to the north.

Graniteville is the name of a neighborhood in Staten Island, one of the five boroughs of New York City, USA.

Concord is a neighborhood located in the borough of Staten Island in New York City, New York, United States.

Ward Hill is the name of a neighborhood located in the northeastern part of Staten Island, which is one of the five boroughs of New York City, the United States' largest city. 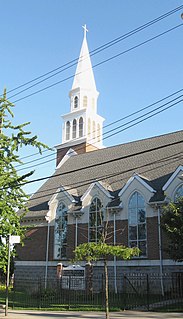 Brighton Heights is a neighborhood in New York City's borough of Staten Island. 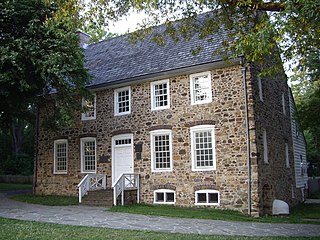 Conference House Park is a park in Tottenville, Staten Island, New York City. The park is located along the Arthur Kill coast where the kill opens into Raritan Bay. It contains clay bluffs, part of the terminal moraine, formed when the Wisconsin Glacier receded 10,000 years ago. Ward's Point, the southernmost point in New York state, is located in the park.

Arlington is a neighborhood on the North Shore of Staten Island, in New York City. It is a subsection of the Mariners' Harbor neighborhood, located north of the North Shore Rail Line ROW, and west of Harbor Road. Arlington was given its name by Civil War veteran and resident Moses Henry Leman, in recognition of Arlington National Cemetery.

Caleb T. Ward Mansion is a historic home located at 141 Nixon Avenue on Ward Hill, Staten Island, New York. Caleb Tompkins Ward built the mansion in 1835 with the help of architect George B. David, who built the mansion out of stucco and brick in an imposing Greek Revival style. Ward acquired the land for his mansion in 1826, after his uncle died. His uncle was Daniel D. Tompkins, Governor of New York.

The Church of Our Lady of Good Counsel is a Roman Catholic parish church in the Roman Catholic Archdiocese of New York, located at 10 Austin Place, Staten Island, New York City.

Tompkins Avenue is a mostly residential yet primary east-west artery that runs through the Fort Wadsworth, Rosebank, Shore Acres, Clifton, and Stapleton neighborhoods of New York City, in the borough of Staten Island, New York.

Park Hill is a residential area on Staten Island in New York City. The area houses the Park Hill Apartments, located on Vanderbilt Avenue and on Park Hill Avenue, which were initially developed in the 1960s as a private apartment complex, to which many people from the other boroughs of NYC moved after the opening of the Verrazano-Narrows Bridge. By the late 1960s, however, people realized that it was relatively inexpensive to move to Staten Island and purchase a home or rent an apartment in smaller buildings, which resulted in a loss of the emerging middle-class population it initially attracted. Park Hill remained privately owned but became federally subsidized low-income housing complex, and became the site of steadily increasing crime and drug abuse beginning in the early-1970s. By the late 1980s, Park Hill had gained the nickname of "Crack Hill" due to the many arrests for possession and/or sale of crack cocaine that were taking place in and around the development and the adjacent Fox Hills Apartments to the south. Crime in this area has dramatically decreased since the late 1990s. Community activists are addressing the ongoing conflict between Liberian and African-American youth, primarily between the ages of 10–14. The community organizations run after-school programs to help keep the youth occupied in a productive way. This helps curb gang and street violence. The community tension that occurs in Park Hill is based on poverty and unemployment.