Duane Park is a small, triangular public urban park located in the diamond of the Tribeca neighborhood of Manhattan, New York City. [1] The park is bordered by Hudson Street to the east and branches of Duane Street on north and south sides. It was originally laid out by Calvert Vaux. [2]

The park is supported by a non-profit group, The Friends of Duane Park, whose website contains a brief history of the park and its neighborhood. [3]

The city of New York purchased Duane Park in 1795 from Trinity Church for five dollars. [1] The park is surrounded by beautiful, turn of the century, architecturally ornate loft buildings which were constructed during the 19th century. [1] Duane Street, which borders the park, is named for James Duane, an important parishioner at Trinity Church. [4]

Tribeca, originally written as TriBeCa, is a neighborhood in Lower Manhattan in New York City. Its name is a syllabic abbreviation of "Triangle Below Canal Street". The "triangle" is bounded by Canal Street, West Street, Broadway, and Chambers Street. More recently, a common marketing tactic has been to extend Tribeca's southern boundary to either Vesey or Murray streets to increase the appeal of property listings.

Elm Park is the name of a small park in the Port Richmond section of Staten Island, one of the five boroughs of New York City, United States. The park is located across Innis Street from Port Richmond High School. 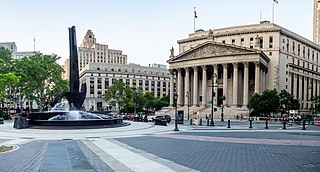 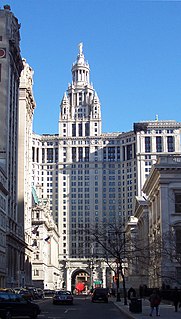 Chambers Street is a two-way street in the New York City borough of Manhattan. It runs from River Terrace, Battery Park City in the west, past PS 234, The Borough of Manhattan Community College, and Stuyvesant High School, to the Manhattan Municipal Building at 1 Centre Street in the east. Between Broadway and Centre Street, Chambers Street forms the northern boundary of the grounds surrounding New York City Hall and the Tweed Courthouse. Opposite the Tweed Courthouse sits the Surrogate's Courthouse for Manhattan. 280 Broadway the Marble Palace, lies west of there, on the north side of Chambers.

St. John's Park was a 19th-century park and square, and the neighborhood of townhouses around it, in what is now the Tribeca neighborhood of Lower Manhattan, New York City. The square was bounded by Varick Street, Laight Street, Hudson Street and Beach Street, now also known for that block as Ericsson Place. Although the name "St. John's Park" is still in use, it is no longer a park and is inaccessible to the public.

West Broadway is a north-south street in the New York City borough of Manhattan, separated into two parts by Tribeca Park. The northern part begins at Tribeca Park, near the intersection of Avenue of the Americas, Walker Street and Beach Street in Tribeca. It runs northbound as a one-way street past Canal Street and becomes two-way at the intersection with Grand Street one block farther north. West Broadway then operates as a main north-south thoroughfare through SoHo until its northern end at Houston Street, on the border between SoHo and Greenwich Village. North of Houston Street, it is designated as LaGuardia Place, which continues until Washington Square South. 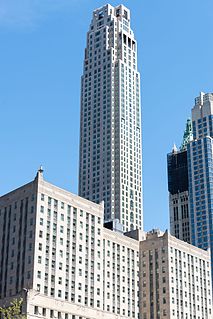 The Four Seasons Hotel New York Downtown, also known as 30 Park Place, is a hotel and residential skyscraper in Tribeca, Manhattan, New York City. At 926 feet (282 m), the tower is one of the tallest residential buildings in Lower Manhattan. The top floors of the 82-story building, known as the Four Seasons Private Residences New York Downtown, have 157 residences, ranging from one to six bedrooms, all reached through a dedicated residential lobby at 30 Park Place. Below is a 189-room Four Seasons Hotel, with its own lobby on Barclay Street, which opened in September 2016.

Juan Pablo Duarte Square, usually shortened to Duarte Square, is a 0.45-acre (0.18 ha) triangular park in Hudson Square, in Lower Manhattan, New York City. The park, operated by the New York City Department of Parks and Recreation, is bound by Sullivan Street and the LentSpace plot to the west, Grand Street to the north, Sixth Avenue to the east, and Canal Street and Albert Capsouto Park to the south.

Washington Market Park is an urban park located in the TriBeCa neighborhood of Lower Manhattan in New York City. The park, which is bounded by Greenwich, Chambers, and West Streets, covers 1.61-acre (6,500 m2). The park also has community gardens and a large playground and hosts many community events.

The Rogers Peet Building is an eight-story building in the Civic Center and Tribeca neighborhoods of Manhattan, New York City. Built between 1898 and 1899, it replaced a five-story structure that was home to the Rogers Peet clothing store between 1863 and 1898, when the original structure burned down.

Hudson Square is a neighborhood in Lower Manhattan, New York City, approximately bounded by Clarkson Street to the north, Canal Street to the south, Varick Street to the east and the Hudson River to the west. To the north of the neighborhood is Greenwich Village, to the south is TriBeCa, and to the east are the South Village and SoHo. The area, once the site of the colonial property named Richmond Hill, became known in the 20th century as the Printing District and later as West SoHo, and into the 21st century it remains a center of media-related activity, including in advertising, design, communications, and the arts.

Little Syria was a diverse neighborhood that existed in the New York City borough of Manhattan from the late 1880s until the 1940s. The neighborhood was populated largely by Christians who emigrated from an area in the Eastern Mediterranean known as Greater Syria, which today includes Lebanon, Syria, Jordan, and Palestine from 1880 to 1924. Also called the Syrian Quarter, it encompassed Washington Street from Battery Park to above Rector Street. 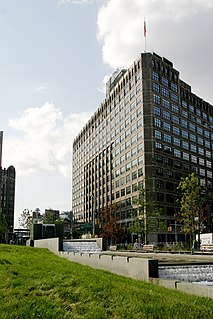 Albert Capsouto Park is a triangular-shaped pocket park in the Tribeca neighborhood of Lower Manhattan in New York City. It is bounded by Canal Street to the northeast, Varick Street to the west, and Laight Street to the south. It is located just east of the Holland Tunnel exit plaza, formerly known as St. John's Park.

BMCC Tribeca Performing Arts Center is a performing arts venue located in Lower Manhattan inside the Borough of Manhattan Community College (BMCC) on 199 Chambers Street, New York, NY. Tribeca's two main theater spaces are Theatre One and Theatre Two, both of which can be rented out. The venue's programming includes music concerts, children's theater, stand-up acts, film retrospectives as well as local and international dance companies. It has also been one of the venues for the annual Tribeca Film Festival. 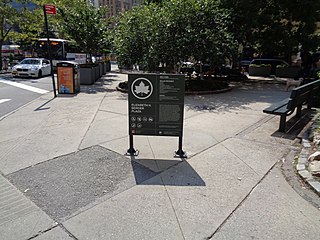 Elizabeth H. Berger Plaza is a public park in the Financial District of Manhattan, New York City. formed by the triangular junction of Trinity Place, Greenwich Street and Edgar Street. It faces the Manhattan exit ramp from the Brooklyn–Battery Tunnel. Formerly known as the Edgar Street Greenstreet, this park honors civic advocate Elizabeth H. Berger (1960-2013). In her role as president of the Downtown Alliance, she advocated for the fusion of two traffic triangles at this location into an expanded park. The park is located on the site of a former neighborhood known as Little Syria, a bustling immigrant community displaced by the construction of the tunnel in 1953.

The Textile Building is a 14-story building at 66 Leonard Street and 239–245 Church Street in the Tribeca neighborhood of Manhattan, New York City.