City Hall Park is a public park surrounding New York City Hall in the Civic Center of Manhattan. It was the town commons of the nascent city of New York. [1]

David Provoost was an officer in the Dutch West India Company

From a record in 1652, his name was on a list of nine men who governed in New Amsterdam. He proved to be an able Lieutenant of Governor Peter Stuyvesant and held for a time the command at Fort Good Hope in Hartford Connecticut. He was made the first sheriff of Breucklyn ( Brooklyn ). He was the owner of 35 acres of land comprising parts of New Amsterdam where the City Hall Park is now situated.

In 1766, the Sons of Liberty erected the first “Liberty pole", a commemorative mast topped by a vane featuring the word “liberty", outside the Soldiers’ Barracks. British soldiers chopped it down, and it was replaced five times. A replica dating to 1921 now stands near its original location between City Hall and Broadway.

In 1766, St. Paul's Chapel was completed as a chapel of Lower Manhattan's Trinity Church. It stood in a field some distance from the growing port city to the south and was built as a "chapel-of-ease" for parishioners who lived far from the Mother Church. Two years later, construction began on the new Bridewell, a jail. American Prisoners of War would be held in the Bridewell during the British occupation of New York during the American Revolutionary War.

On July 9, 1776, people gathered in the commons to hear the Declaration of Independence read by George Washington. On November 9, 1783, the American forces recaptured the Civic Center, and George Washington raised the flag in the park. Six years later, General Washington was named the president of the United States of America, and immediately after his inauguration, President Washington went to the renowned St. Paul’s Chapel, the oldest surviving church in Manhattan.

In 1802, since the original City Hall of New York City was aging and could not accommodate the growing municipal government, New York City's administration decided to hold a competition for the best new City Hall design. Aaron Burr promised Philadelphia’s Benjamin Henry Latrobe that he would win. When he lost, Latrobe bitterly denounced the winners, “bricklayer” John McComb Jr. and French exile Joseph-François Mangin, and their “vile invention". In fact, McComb and Mangin were each accomplished architects, and their design, largely by Mangin, was superior to Latrobe’s, but City Hall was their only collaboration, and it was brief. McComb alone was chosen to oversee construction, and Mangin's career never recovered. Decades later, a McComb descendant erased Mangin's name from the original drawings, and Mangin was officially recognized as the principal designer of City Hall in 2003. The building was completed in 1812; it was designed in a Federal style with French influence. Some critics complained that the New City Hall was too far north of the heart of the city, but others liked the remote location and beautiful landscape of the building.

Slavery was abolished in New York on July 4, 1827, Emancipation Day, prompting a two-day celebration in the park and a parade.

In 1830, the old debtor prison, New Gaol, was transformed into the city’s hall of records. When the building was torn down in 1903, it was New York’s oldest municipal building.

In 1842, the Croton Fountain was placed in the center of City Hall Park to celebrate the Croton Aqueduct, New York City’s first dependable supply of pure water. The aqueduct drew water from the Croton Dam more than 40 miles (64 km) north of the city and was considered one of the great engineering feats of the 19th century.

Starting in 1861, the Tweed Courthouse was built in the northern portion of the park. The courthouse was widely seen as a symbol of corruption because it was built using funds provided by the corrupt William M. "Boss" Tweed, whose Tammany Hall political machine controlled the city and state governments at the time. It was completed in 1881, twenty years after construction started. [3]

New York City Hall is the seat of New York City government, located at the center of City Hall Park in the Civic Center area of Lower Manhattan, between Broadway, Park Row, and Chambers Street. Constructed from 1803 to 1812, the building is the oldest city hall in the United States that still houses its original governmental functions, such as the office of the Mayor of New York City and the chambers of the New York City Council. While the Mayor's Office is in the building, the staff of thirteen municipal agencies under mayoral control are located in the nearby Manhattan Municipal Building, one of the largest government buildings in the world.

Collect Pond, or Fresh Water Pond, was a body of fresh water in what is now Chinatown in Lower Manhattan, New York City. For the first two centuries of European settlement in Manhattan, it was the main New York City water supply system for the growing city. The former pond became the site of a jail and is now a city park, Collect Pond Park, which includes a pond evocative of its former status. 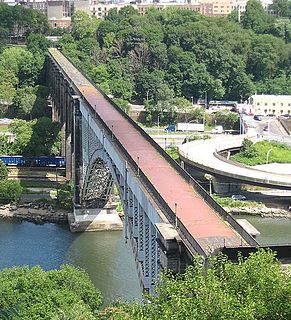 The High Bridge is the oldest bridge in New York City, having originally opened as part of the Croton Aqueduct in 1848 and reopened as a pedestrian walkway in 2015 after being closed for over 45 years. A steel arch bridge with a height of 140 ft (43 m) over the Harlem River, it connects the New York City boroughs of the Bronx and Manhattan. The eastern end is located in the Highbridge section of the Bronx near the western end of West 170th Street, and the western end is located in Highbridge Park in Manhattan, roughly parallel to the end of West 174th Street. 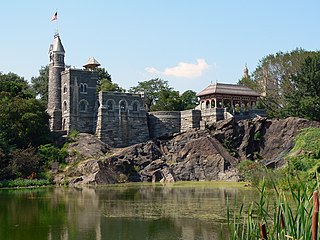 Belvedere Castle is a folly in Central Park in Manhattan, New York City. It contains exhibit rooms and an observation deck, and since 1919, has also housed the official Central Park weather station. 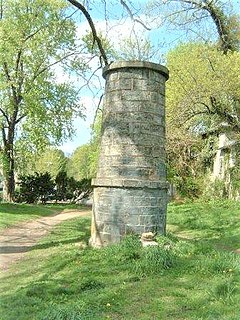 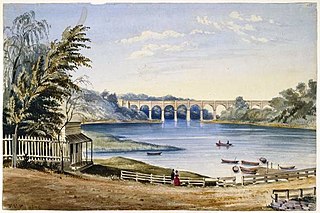 A combination of aqueducts, reservoirs, and tunnels supply fresh water to New York City. With three major water systems stretching up to 125 miles (201 km) away from the city, its water supply system is one of the most extensive municipal water systems in the world. 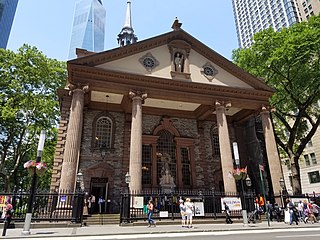 St. Paul's Chapel is a chapel building of Trinity Church, an episcopal parish, located at 209 Broadway, between Fulton Street and Vesey Street, in Lower Manhattan, New York City. Built in 1766, it is the oldest surviving church building in Manhattan, and one of the nation's finest examples of Late Georgian church architecture.

The Amawalk Reservoir is a small reservoir in the New York City water supply system located in central-northern Westchester County, New York. It is located at the intersection of U.S. Route 202 and New York State Route 35 in the town of Somers, and is over 32 miles north of New York City. Part of the system's Croton Watershed, it was formed by impounding the middle of the Muscoot River, one of the tributaries of the Croton River. This reservoir was put into service in 1897, and was named after the original community of Amawalk, New York, which was inundated by the reservoir and relocated near the dam.

The Civic Center is the area and neighborhood of Lower Manhattan, Manhattan, New York City, that encompasses New York City Hall, One Police Plaza, the courthouses in Foley Square, the Metropolitan Correctional Center and the surrounding area. The district is bound on the west by Tribeca at Broadway, on the north by Chinatown at Worth Street or Bayard Street, on the east by the East River and the Brooklyn Bridge at South Street, and on the south by the Financial District at Ann Street. 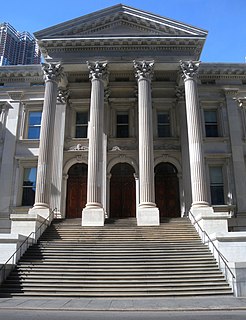 The Tweed Courthouse is a historic courthouse building at 52 Chambers Street in the Civic Center, Manhattan, New York City. It was built in the Italianate style with Romanesque Revival interiors. William M. "Boss" Tweed – the corrupt leader of Tammany Hall, a political machine that controlled the New York state and city governments when the courthouse was built – oversaw the building's erection. The Tweed Courthouse served as a judicial building for New York County, a county of New York state coextensive with the New York City borough of Manhattan. It is the second-oldest city government building in the borough, after City Hall.

St. Nicholas Park is a public park in Manhattan, New York City, between the neighborhoods of Harlem, Hamilton Heights and Manhattanville. The nearly 23-acre (93,000 m2) park is contained by 141st Street to the north, 128th Street to the south, St. Nicholas Terrace to the west, and St. Nicholas Avenue to the east. 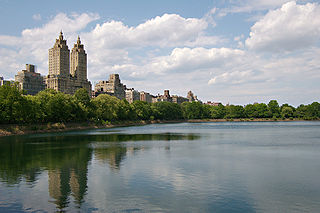 The Jacqueline Kennedy Onassis Reservoir, also known as Central Park Reservoir, is a decommissioned reservoir in Central Park in the borough of Manhattan, New York City, stretching from 86th to 96th Streets. It covers 106 acres (43 ha) and holds over 1,000,000,000 US gallons (3,800,000 m3) of water.

The New Croton Aqueduct is an aqueduct in the New York City water supply system in Westchester County, New York carrying the water of the Croton Watershed. Built roughly parallel to the Old Croton Aqueduct it originally augmented, it opened in 1910. The old aqueduct remained in service until 1955, when supply from the Delaware and Catskill Aqueducts was sufficient to take it off line.

McGowan's Pass is a topographical feature of Central Park in New York City, just west of Fifth Avenue and north of 102nd Street. It has been incorporated into the park's East Drive since the early 1860s. A steep hill descending into a switchback road, it is a popular training route for competitive bicyclists and runners.

Joseph-François Mangin was born on June 10, 1758 in Dompaire, in the Vosges region of France. He was a French-American architect who is noted for designing New York City Hall and St. Patrick's Old Cathedral in New York City. 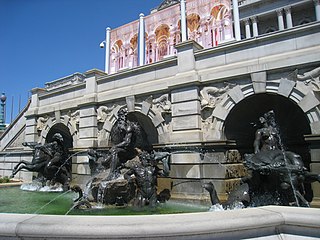 The first decorative fountain in the United States was dedicated in Philadelphia in 1809. Early American fountains were used to distribute clean drinking water, had little ornamentation, and copied European styles.

McKenna Square is a 0.24-acre public green space in the Washington Heights neighborhood of Upper Manhattan in New York City. The park is located in a median of West 165th Street, between Audubon and Amsterdam Avenues. The triangular site was created in 1917 in conjunction of the widening of West 165th Street and was transferred to Parks in 1937. 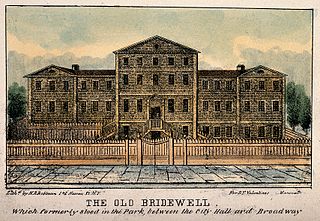 The Bridewell was a municipal prison built in 1768 on the site now occupied by City Hall Park in the Civic Center neighborhood of Manhattan, New York City. 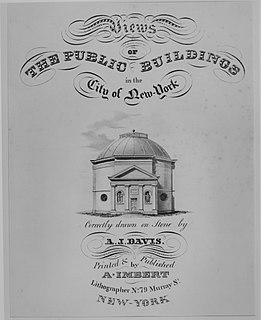 The Rotunda was a building that stood in City Hall Park in Lower Manhattan, New York City, from 1818 to 1870.