Lists of rural localities in Russia

This article contains lists of rural localities in Russia, organized by federal subject. The federal subjects of Russia are the constituent entities of Russia, its top-level political divisions according to the Constitution of Russia. [1] Under the classification system for inhabited locations in Russia, a rural locality is one of a number of types of rural settlements, including villages, selos, stanitsas, slobodas, khutors, pochinoks, and other local variations. 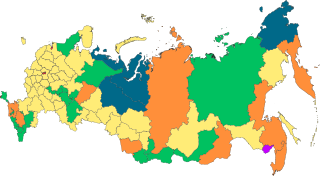 Tyumensky (masculine), Tyumenskaya (feminine), or Tyumenskoye (neuter) may refer to:

Eveno-Bytantaysky National District is an administrative and municipal district, one of the thirty-four in the Sakha Republic, Russia. The area of the district is 52,300 square kilometers (20,200 sq mi). Its administrative center is the rural locality of Batagay-Alyta. As of the 2010 Census, the total population of the district was 2,867, with the population of Batagay-Alyta accounting for 63.9% of that number.

Alsheyevsky District is an administrative and municipal district (raion), one of the fifty-four in the Republic of Bashkortostan, Russia. It is located in the west of the republic. The area of the district is 2,415 square kilometers (932 sq mi). Its administrative center is the rural locality of Rayevsky. As of the 2010 Census, the total population of the district was 43,647, with the population of Rayevsky accounting for 44.8% of that number.

City of federal subject significance is an administrative division of a federal subject of Russia which is equal in status to a district but is organized around a large city; occasionally with surrounding rural territories. 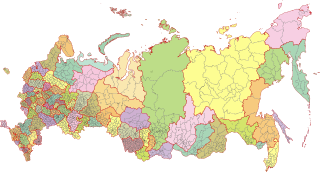 This article includes a location-related list of lists.
This page is based on this Wikipedia article
Text is available under the CC BY-SA 4.0 license; additional terms may apply.
Images, videos and audio are available under their respective licenses.