In its southern extreme, the Antarctic Peninsula stretches west, with Palmer Land eventually bordering Ellsworth Land along the 80° W line of longitude. Palmer Land is bounded in the south by the ice-covered Carlson Inlet, an arm of the Filchner Ice Shelf, which crosses the 80° W line. This is the base of Cetus Hill.

This feature is named after Captain Nathaniel B. Palmer; an American sealer who explored the Antarctic Peninsula area southward of Deception Island in the sloop Hero in November, 1820. [1]

The Antarctic Peninsula, known as O'Higgins Land in Chile, Tierra de San Martin in Argentina, and originally known as the Palmer Peninsula in the US and as Graham Land in the United Kingdom, is the northernmost part of the mainland of Antarctica, located at the base of the Southern Hemisphere. 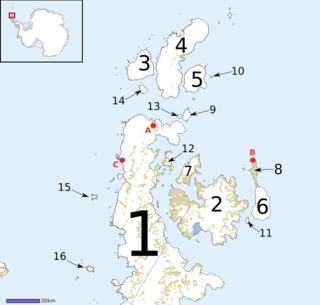 Avery Plateau is an ice-covered plateau, about 40 miles (64 km) long and rising to about 2,000 metres (6,600 ft), midway between Loubet Coast and Foyn Coast in Graham Land, Antarctica. It borders Hemimont Plateau on the south and Bruce Plateau on the north. The first sighting of this plateau is not certain, but it was presumably seen in January and February 1909 by members of the French Antarctic Expedition under Jean-Baptiste Charcot from various positions in the Matha Strait. It was surveyed in 1946–47 by the Falkland Islands Dependencies Survey, and named by the UK Antarctic Place-Names Committee (1955) after Captain George Avery, master of the cutter Lively, who, with Captain John Biscoe in the brig Tula, approached this part of the Antarctic Peninsula in February 1832.

Whistler Nunatak is a nunatak lying west of Mount Mende in the Sky-Hi Nunataks, Palmer Land. Named in 1987 by Advisory Committee on Antarctic Names (US-ACAN) in reference to the whistler effect caused by amplitude change of radio signals in the upper atmosphere and in association with names of upper atmosphere researchers grouped in the area.

Mount Cox is a mountain 1,960 metres (6,430 ft) high in the north-central part of the Emlen Peaks, 5 nautical miles (9 km) north of Killer Nunatak, Victoria Land, Antarctica. The topographical feature was first mapped by the United States Geological Survey (USGS) from surveys and from U.S. Navy air photos, 1960–63, and named by the Advisory Committee on Antarctic Names for Allen N. Cox, U.S. Navy, crew chief in R4D (Skytrain) aircraft during 1962–63 in support of the USGS Topo East-West survey. Cox returned to the Antarctic in the 1963–64 and 1964–65 seasons. The mountain lies situated on the Pennell Coast, a portion of Antarctica lying between Cape Williams and Cape Adare.

Sverdrup Nunataks is a line of peaks in Antarctica trending WNW-ESE and rising to 1,800 m in the northwest part of Carey Range, near the edge of the interior plateau in southeast Palmer Land. They were mapped by United States Geological Survey (USGS) from aerial photographs taken by the U.S. Navy, 1966–69. In association with the names of Antarctic oceanographers grouped in this area, named by the United Kingdom Antarctic Place-Names Committee (UK-APC) in 1977 after Harald U. Sverdrup (1888–1957), Norwegian oceanographer and meteorologist; Director, Scripps Institution of Oceanography, 1936–48; Director, Norsk Polarinstitutt, 1948–57, and Chairman of the International Committee for the Norwegian-British-Swedish Antarctic Expedition, 1949–52.

The Journal Peaks are two groups of separated peaks and nunataks which trend east-west for about 8 nautical miles (15 km). They rise 17 nautical miles (31 km) southeast of the Seward Mountains in central Palmer Land, Antarctica. The peaks were mapped by the United States Geological Survey from U.S. Navy aerial photography, 1966–69, and were named by the Advisory Committee on Antarctic Names after the Antarctic Journal of the United States, established 1966, a publication of the Division of Polar Programs, National Science Foundation, reporting on the U.S. Antarctic Research Program and related activities.

The Franck Nunataks are a scattered group of small rock outcrops, 3 nautical miles (6 km) in extent, at the base of the Beethoven Peninsula in the southwest part of Alexander Island, Antarctica. They were first mapped from air photos taken by the Ronne Antarctic Research Expedition, 1947–48, by D. Searle of the Falkland Islands Dependencies Survey in 1960. They were named by the UK Antarctic Place-Names Committee after César Franck, the French composer, 1822–1890. 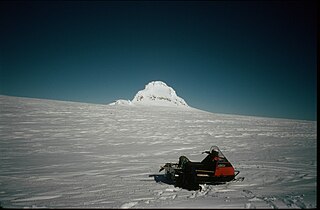 Klinck Nunatak is an isolated nunatak rising to about 1,800 metres (5,900 ft) between the Blanchard Nunataks and the Holmes Hills in south-central Palmer Land, Antarctica. It was mapped by the United States Geological Survey from aerial photographs taken by the U.S. Navy, 1966–69, and was named by the Advisory Committee on Antarctic Names in 1977 for Jay C. Klinck, U.S. Navy, a construction mechanic at Palmer Station, winter party 1970, who also provided United States Antarctic Research Program operational support at Siple Station, winter party 1973.

The Holden Nunataks are a group of about four nunataks rising to 1,500 metres (4,900 ft) near the head of Mosby Glacier, to the south of the Journal Peaks in south-central Palmer Land, Antarctica. They were mapped by the United States Geological Survey from aerial photographs taken by the U.S. Navy, 1966–69. The group was surveyed by the British Antarctic Survey (BAS), 1974–75, and named by the UK Antarctic Place-Names Committee after Godfrey A. Holden, a BAS general assistant who took part in the survey, and was later Station Commander at Rothera Station, 1977–78.

The Horne Nunataks are a group of six nunataks in relative isolation, located on the north side of Goodenough Glacier, about 7 nautical miles (13 km) inland from the west coast of Palmer Land, Antarctica. They were named by the UK Antarctic Place-Names Committee for Ralph R. Horne, a British Antarctic Survey geologist at the Adelaide and Stonington Island stations in 1964–65.

Kamenev Nunatak is a ridge-like nunatak located inland from Odom Inlet and 7 nautical miles (13 km) west of Mount Whiting in Palmer Land, Antarctica. It was mapped by the United States Geological Survey (USGS) in 1974, and was named by the Advisory Committee on Antarctic Names for Yevgeniy N. Kamenev, a Soviet geologist who was an Exchange Scientist to the U.S. McMurdo Station in 1972. He participated as a member of the USGS geological and mapping party to the Lassiter Coast in 1972–73. 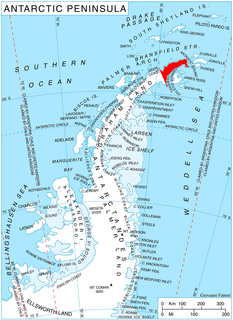 Siniger Nunatak is the rocky hill rising to over 500 m in the upper course of Russell East Glacier on Trinity Peninsula in Graham Land, Antarctica.