Sapphire Rapids is a codename for Intel's next generation Xeon server processors based on Intel 7, which is rebranded 10 Enhanced SuperFin process. [1] [2] Sapphire Rapids CPUs are designed for data centers; the roughly contemporary Alder Lake is intended for the wider public. [3]

Sapphire Rapids will be used as part of the Eagle Stream server platform in 2022. [4] [5] In addition, it will be powering one of the first exascale supercomputers in the United States, Aurora, at Argonne National Laboratory. [6]

Intel Ivy Bridge-based Xeon microprocessors is the follow-up to Sandy Bridge-E, using the same CPU core as the Ivy Bridge processor, but in LGA 2011, LGA 1356 and LGA 2011-1 packages for workstations and servers.

Double Data Rate 5 Synchronous Dynamic Random-Access Memory is a type of synchronous dynamic random-access memory. Compared to its predecessor DDR4 SDRAM, DDR5 is planned to reduce power consumption, while doubling bandwidth. The standard, originally targeted for 2018, was released on 14 July 2020. 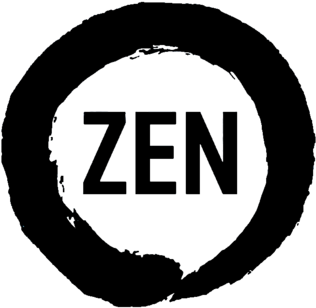 Zen is the codename for the first iteration in a family of computer processor microarchitectures of the same name from AMD. It was first used with their Ryzen series of CPUs in February 2017. The first Zen-based preview system was demonstrated at E3 2016, and first substantially detailed at an event hosted a block away from the Intel Developer Forum 2016. The first Zen-based CPUs codenamed "Summit Ridge" reached the market in early March 2017, Zen-derived Epyc server processors launched in June 2017 and Zen-based APUs arrived in November 2017.

Cascade Lake is an Intel codename for a 14 nanometer server, workstation and enthusiast processor microarchitecture, launched in April 2019. In Intel's Process-Architecture-Optimization model, Cascade Lake is an optimization of Skylake. Intel states that this will be their first microarchitecture to support 3D XPoint-based memory modules. It also features Deep Learning Boost instructions and mitigations for Meltdown and Spectre. Intel officially launched new Xeon Scalable SKUs on February 24, 2020.

LGA 1200 is an Intel microprocessor compatible socket for Comet Lake and Rocket Lake desktop CPUs which was released in Q2 2020.

Alder Lake is Intel's codename for the 12th-generation of Intel Core processors based on a hybrid architecture utilizing Golden Cove high-performance cores and Gracemont power-efficient cores. Intel expects to launch Alder Lake on November 19th, 2021. It is to be fabricated using Intel's Intel 7 process, previously referred to as Intel 10 nm Enhanced SuperFin (10ESF).