Thopho, or Black Phula, is an endangered Loloish language spoken by the Phula people of Yunnan, China. There are 200 speakers out of an ethnic population of 500 speakers. It is spoken in the following two villages in eastern Guangnan County, Yunnan.

Kaiyuan is a county-level city within the jurisdiction of Honghe Hani and Yi Autonomous Prefecture in the southeast of Yunnan province, China.

Zhenkang County is located in the west of Yunnan province, China, bordering Burma's Shan State to the west. It is under the administration of the prefecture-level city of Lincang.

Simao District is a district under the jurisdiction of Pu'er City, Yunnan Province, China. It is the seat of Pu'er Prefecture. Formerly both Simao and the surrounding region of Pu'er prefecture played a major role in the historic tea horse trade between Yunnan, Tibet and India, with Simao acting as the southern terminus or starting point for the transport of tea by mule caravan north to Dali, Lijiang and Lhasa. Tea remains a central crop and product of the region. 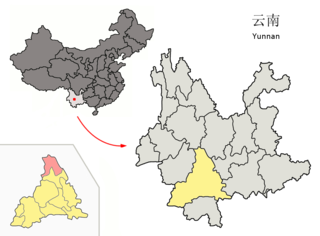 Jingdong Yi Autonomous County is an autonomous county in the west-central part of Yunnan Province, China. It is the northernmost county-level division of the prefecture-level city of Pu'er.

Xinping Yi and Dai Autonomous County is an autonomous county located in the central part of Yunnan Province, China. It is the westernmost county-level division of the prefecture-level city of Yuxi.

Nanjian Yi Autonomous County is a county in the Dali Bai Autonomous Prefecture located in the west central part of Yunnan province, China. 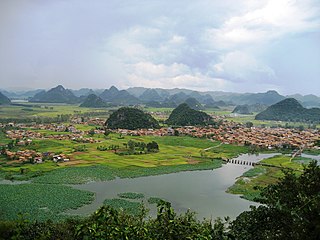 Qiubei County is under the administration of the Wenshan Zhuang and Miao Autonomous Prefecture, in southeast Yunnan province, China.

Menghai County is a county under the jurisdiction of Xishuangbanna Dai Autonomous Prefecture, in the far south of Yunnan, China, bordering Burma's Shan State to the southwest. Meng is as variation of Mueang.

Va is a pair of Angkuic languages spoken in Mojiang Hani Autonomous County, Yunnan, China. Although the Va autonym is, the language is not Wa, and neither does it belong to the Waic language subgroup. Rather, Va constitutes a separate subdivision within the Angkuic languages.

Pela or Bola, is a Burmish language of Western Yunnan, China. In China, Pela speakers are classified as part of the Jingpo ethnic group. Pela may also be spoken in Burma.

Awu, also known as Lope, is a Loloish language of China. Awu is spoken in Luxi, Mile, Luoping, and Shizong counties (Ethnologue). It is closely related to Nisu.

Awu, is an unclassified Loloish language of Yunnan, China. It is spoken in Yuanyang County, Yunnan, China, including in the village of Xiaopingzi 小坪子, Daping Township 大坪乡.

Naruo 纳若 is a Loloish language cluster spoken by the Yi people of Yunnan, China.