Trou de l’Abîme also known as La caverne de l'Abîme and Couvin Cave is a karst cave located on the right bank of the Eau Noire river in the center of Couvin, Belgium, in Namur province. During various archaeological excavations of sediment deposits Mousterian artefacts and a Neanderthal molar were discovered. [1]

Karst is a topography formed from the dissolution of soluble rocks such as limestone, dolomite, and gypsum. It is characterized by underground drainage systems with sinkholes and caves. It has also been documented for more weathering-resistant rocks, such as quartzite, given the right conditions. Subterranean drainage may limit surface water, with few to no rivers or lakes. However, in regions where the dissolved bedrock is covered or confined by one or more superimposed non-soluble rock strata, distinctive karst features may occur only at subsurface levels and be totally missing above ground. 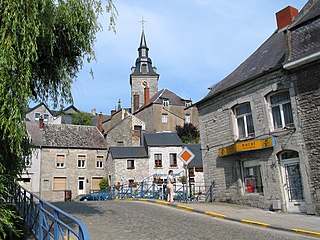 Couvin is a Walloon municipality located in the Belgian province of Namur.

The site consists of a large two level cave with the entrance on the upper level of the western face of an Eifelian limestone cliff and a large terrace which forms a rock shelter of 50 m (160 ft) width and 5 m (16 ft) depth.

Excavations of the cave entrance were first conducted in 1887 and 1902 but the evidence recovered from these is lost. There is lithic and paleontological material from a 1905 excavation but as these were found in reworked sediments from the earlier excavations the context has been lost. [2] [3]

In a series of excavations between 1984 and 1985 Palaeolithic stone artifacts and Pleistocene faunal remains were uncovered. Most of the lithic material is flint which had to be transported to the site from a mine at least 30 km (19 mi) away. [4] Associated with the material was a partial human molar. [3] At the time it was found scientists were unable to determine whether it was Homo sapiens or Neanderthal. A 2009 study was able to identify it as belonging to a Neanderthal child. The soil of the layer where the tooth was found has been estimated to be between 42,000 and 40,000 years old which the authors state "is consistent with both a recently obtained accelerator mass spectrometry dating result at 44,500 BP and the published conventional date." The AMS date is that of a horse tooth found in the same layer. [5]

In taxonomy, Homo sapiens is the only extant human species. The name is Latin for "wise man" and was introduced in 1758 by Carl Linnaeus. 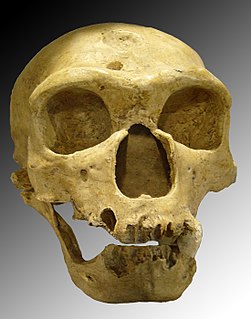 Neanderthals are an extinct species or subspecies of archaic humans in the genus Homo, who lived within Eurasia from circa 400,000 until 40,000 years ago.

The 1905 artifacts have been associated with a variety of prehistoric cultures, such as Solutrean, Mousterian, Proto-Solutrean and a transitional culture in between the Middle and Upper Paleolithic. As of 2016 the assemblage from both the 1905 excavation and the 1980s excavations is considered to be Mousterian. [4] [5]

The Solutrean industry is a relatively advanced flint tool-making style of the Upper Palaeolithic of the Final Gravettian, from around 22,000 to 17,000 BP. Solutrean sites have been found in modern-day France, Spain and Portugal. 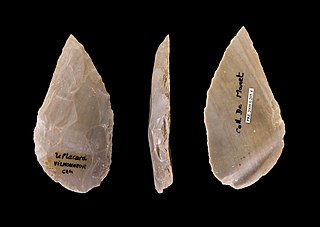 The Mousterian is a techno-complex of flint lithic tools associated primarily with the earliest anatomically modern humans in North Africa and West Asia, as well as with the Neanderthals in Europe. The Mousterian largely defines the latter part of the Middle Paleolithic, the middle of the West Eurasian Old Stone Age. It lasted roughly from 160,000 to 40,000 BP. If its predecessor, known as Levallois or "Levallois-Mousterian" is included, the range is extended to as early as c. 300,000–200,000 BP. 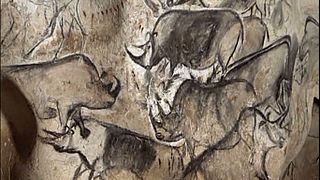 The Upper Paleolithic is the third and last subdivision of the Paleolithic or Old Stone Age. Very broadly, it dates to between 50,000 and 10,000 years ago, according to some theories coinciding with the appearance of behavioral modernity and before the advent of agriculture.

Naulette, French: Caverne de la Naulette is a large cave on the left bank of the Lesse, a tributary of the Meuse in the hills above Dinant, Belgium. 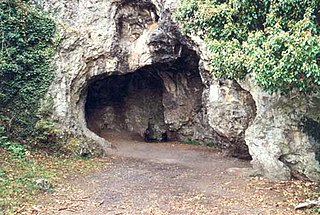 Spy Cave is located near Spy in the municipality of Jemeppe-sur-Sambre, province of Namur, Belgium above the left bank of the Orneau River. Classified as a premier Heritage site of the Walloon Region, the location ranks among the most significant paleolithic sites in Europe. The cave consists of numerous small chambers and corridors.

Prehistoric France is the period in the human occupation of the geographical area covered by present-day France which extended through prehistory and ended in the Iron Age with the Celtic "La Tène culture".

Axlor is a prehistoric archeological site in the village of Dima in Biscay in the Autonomous Basque Community of Spain, dating from the Middle Paleolithic or Mousterian period.

The Do-Ashkaft Cave, being a Middle Paleolithic cave site, is located north of Kermanshah, near Taq-e Bostan, Iran about 1,600 m (5,200 ft) above sea level. Its entrance faces south of Meywala Mount, overlooking the national park of Kuhestan. The site was first visited in 1996 by Iranian researchers F. Biglari and S. Heydari-Guran and during the following four years a series of surface surveys were made at one-month intervals, which resulted in a rich collection of Middle Paleolithic lithic artifacts.

Patrick M.M.A. Bringmans was born 28 November 1970 in Hasselt, Belgium to Albert and Elly Bringmans-Jans. He is a Belgian archaeologist and paleoanthropologist whose main field of study has been the Palaeolithic period. 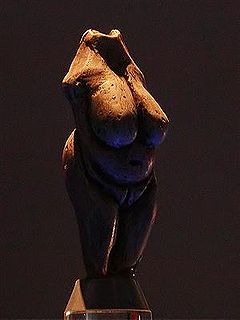 Paleolithic Europe, the Lower or Old Stone Age in Europe encompasses the era from the arrival of the first archaic humans, about 1.4 million years ago until the beginning of the Mesolithic around 10,000 years ago. This period thus covers over 99% of the total human presence on the European continent. The early arrival and disappearance of Homo erectus and Homo heidelbergensis, the appearance, complete evolution and eventual demise of Homo neanderthalensis and the immigration and successful settlement of Homo sapiens all have taken place during the European Paleolithic. 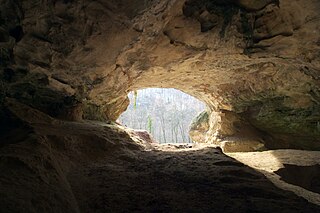 Vindija Cave is an archaeological site associated with Neanderthals and modern humans, located in the municipality of Donja Voća, northern Croatia. Three of these Neanderthals were selected as the primary sources for the first draft sequence of the Neanderthal genome project. 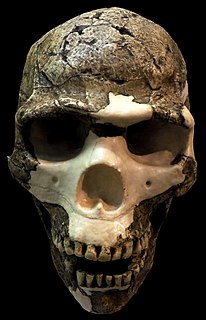 The Skhul/Qafzeh hominins or Qafzeh–Skhul early modern humans are hominin fossils discovered in the Qafzeh and Es Skhul Caves in Israel. They are today classified as Homo sapiens, among the earliest of their species in Eurasia. Skhul Cave is on the slopes of Mount Carmel; Qafzeh Cave is a rockshelter in Lower Galilee.

Mezmaiskaya Cave is a prehistoric cave site overlooking the right bank of the Sukhoi Kurdzhips in the southern Russian Republic of Adygea, located in the northwestern foothills of the North Caucasus in the Caucasus Mountains system.

The Neanderthals in Gibraltar were among the first to be discovered by modern scientists and have been among the most well studied of their species according to a number of extinction studies which emphasize regional differences, usually claiming the Iberian Peninsula partially acted as a “refuge” for the shrinking Neanderthal populations and the Gibraltar community of Neanderthals as having been one of many dwindling communities of archaic human populations, existing just until around 42,000 years ago. Many other Neanderthal communities went extinct around the same time.

Scladina, or Sclayn Cave, is an archaeological site in the Andenne hills in Belgium, where excavations since 1978 have provided the material for an exhaustive collection of over thirteen thousand Mousterian stone artifacts and the fossilized remains of an especially ancient Neanderthal, called the Scladina child were discovered in 1993.

The Obi-Rakhmat Grotto is a Middle Paleolithic prehistoric site that yielded Neanderthal fossils. It is a shallow karst cave near the junction of the Chatkal and Pskem Rivers at the southwestern end of the Talassky Alatau Range in the Tien Shan Mountains, 100 km (62 mi) northeast of Tashkent, Uzbekistan. 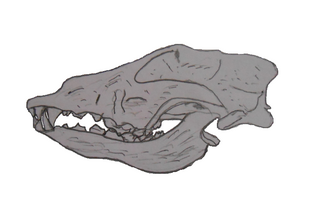 The Goyet Caves are a series of connected caves located in a limestone cliff about 15 m above the river Samson near the village of Mozet in the Gesves municipality of the Namur province, Belgium. The site is a significant locality of regional Neanderthal and European early modern human occupation, as thousands of fossils and artifacts were discovered that are all attributed to a long and contiguous stratigraphic sequence from 120,000 years ago, the Middle Palaeolithic to less than 5.000 years ago, the late Neolithic. A robust sequence of sediments was identified during extensive excavations by geologist Edouard Dupont, who undertook the first probings as early as 1867. The site was added to the Belgian National Heritage register in 1976.

The Noisetier Cave, owing its popular name to the Hazel trees that grow in front of its entrance, is located in a mountainside 145 m (476 ft) atop the Vallée d'Aure in the Ardengost commune, Hautes-Pyrénées department in the region Occitania, southern France. During systematic excavations since 1992 Middle Paleolithic stone tools and artifacts attributed to the Neanderthal Mousterian culture were discovered among numerous faunal remains.

The small Sirgenstein Cave, German: Sirgensteinhöhle is situated 565 m (1,854 ft) above sea level inside the 20 m (66 ft) high Sirgenstein, a limestone rock. The cave sits 35 m (115 ft) above the Ach River valley bottom in the central Swabian Jura, southern Germany. Archaeologist R. R. Schmidt excavated the site in 1906 during which he identified indices of prehistoric human presence. He recorded the complete stratigraphic sequence of Palaeolithic and Neolithic origin. In his 1910 analysis Schmidt inspired future archaeologists with his pioneering concept of including the excavation site within its geographic region, contextualizing it within a wide scientific spectrum and demonstrated valuable results as he correlated the Sirgenstein layer structure to those of prehistoric sites in France. 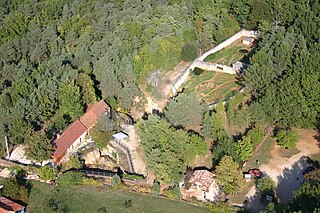 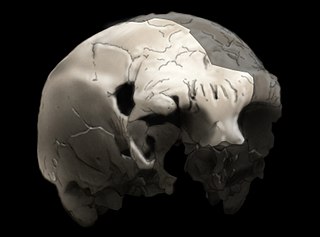 Aroeira 3 is a 400,000 year old Homo heidelbergensis hominid skull which was discovered in the Aroeira cave, Portugal. It is the earliest human trace in Portugal. H. heidelbergensis existed at the transition between Homo erectus and early Neanderthals and used both stone tools and fire. The skull was damaged during the 2014 excavation but was restored in the following two years. In 2017 the description of the skull was published in PNAS. It is on display in the National Archaeology Museum (Lisbon).

The Cave of the Angel refers to several cave-related structures placed at Aras mountain range at the town of Lucena, Córdoba province in Spain. Here, it is located an Acheulean site that spans from the Middle Pleistocene to the Upper Pleistocene. There are geological, paleontological and archaeological evidences indicating an intense and long term occupation of this site. The study of numerous bone and lithic remains found in this site reveal exposure to fire. This along with the finding of a wide and deep combustion structure in the stratigraphic profile support the hypothesis that at the time of the occupation of the site by humans there was processing and consumption of big mammals.