Tees Valley Regeneration was an urban regeneration company covering the Tees Valley area of North East England [1] and at one time was the largest urban development agency in England. [2] The headquarters were at Cavendish House, Teesdale Business Park in Thornaby-on-Tees.

Tees Valley Regeneration started in 2002, operated for seven years under the leadership of Joe Docherty, who left the organisation in 2009, and closed in 2010; responsibility for regeneration was transferred to local councils. [2]

Other local and regional development agencies

North East England is one of nine official regions of England at the first level of NUTS for statistical purposes. It includes the counties of Tyne and Wear, County Durham, Northumberland and a small part of North Yorkshire. The north east is home to three conurbations: Tyneside, Wearside, and Teesside, as well as three cities: Newcastle upon Tyne, Sunderland and City of Durham. Large towns in the region include Darlington, Gateshead, Hartlepool, Middlesbrough, South Shields, Stockton-on-Tees and Washington. The region is home to a number of universities including Durham University and Newcastle University, both members of the Russell Group.

Cleveland or Lower Teesdale is low-lying land north of the North York Moors and around the River Tees, of England. The vale is a continuation of the Vale of Mowbray to the south west. The name Cleveland comes from a variant of "cliff-land", referring to the view to and from the Hills of Cleveland. These hills rises to nearly 1,500 ft (460 m) and are a part of the North York Moors. 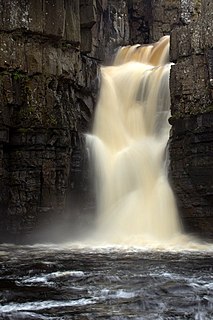 The River Tees, in northern England, rises on the eastern slope of Cross Fell in the North Pennines and flows eastwards for 85 miles (137 km) to reach the North Sea between Hartlepool and Redcar near Middlesbrough. The modern day history of the river has been tied with the industries on Teesside in its lower reaches, where it has provided the means of import and export of goods to and from the north east region. The need for water further downstream also meant that reservoirs were built in the extreme upper reaches, such as Cow Green. 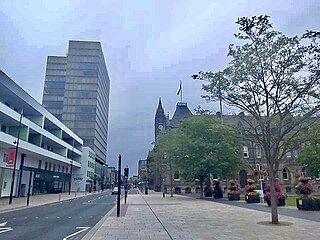 Middlesbrough is a large town and local authority area. The town is on the southern bank of the River Tees in the north part of England. 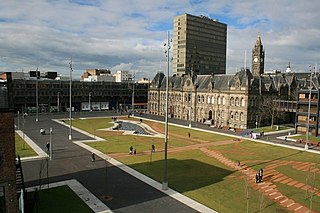 Teesside is a conurbation around the River Tees in Northern England, including Hartlepool, Middlesbrough, Redcar and Cleveland and Stockton-on-Tees unitary authorities. 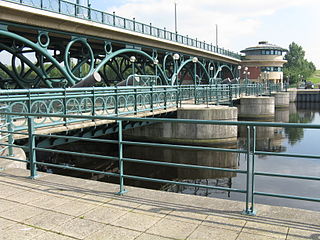 Thornaby-on-Tees, also referred to as Thornaby, is a market town and civil parish on the south bank of the River Tees, North Yorkshire, in Northern England and in the borough of Stockton-on-Tees, governed by Stockton-on-Tees Borough Council. The town had previously formed its own borough. It had a population of 24,741 according to the 2011 census.

Eaglescliffe is a town and civil parish, with a town council. The town is on the north bank of the River Tees in County Durham, England, and in the borough of Stockton-on-Tees, governed by Stockton-on-Tees Borough Council.

The Tees Valley is a combined authority region in the Northern England around the River Tees's lower reaches. The north Tees settlements are in both the historic and current County Durham while the south Tees settlements are in North Yorkshire, the latter of which historically in the North Riding of Yorkshire. The region is not a geographical valley.

Teesside International Airport, known previously as Durham Tees Valley Airport, is an international airport located in the Tees Valley city region in north-east England. The airport is just east of Darlington and just west of Stockton-on-Tees, and is about 10 mi (16 km) south-west of central Middlesbrough. The airport serves Teesside, County Durham, and North Yorkshire, and is situated close to the village of Middleton St George.

Teesside Park is a retail superstore and leisure development in Thornaby-on-Tees, built in 1988. Located just off the A66 near the A66/A19 interchange, it is split between the unity authorities of Stockton-on-Tees and Middlesbrough with the line of the Old River Tees, which runs down the middle of the development, forming the boundary between the two authorities. The development has an eye-catching central building that was constructed in 2008.

Darlington College is a further education college in Darlington, County Durham, England. The college campus is located at Central Park, Haughton Road. With support from Darlington Borough Council and Tees Valley Regeneration the college building was constructed by Shepherd Construction, starting in 2004. Founded in 1897, it assumed its present form in September 2006 and was officially opened by the then-Prime Minister, Tony Blair, on 22 December 2006.

The Teesside Development Corporation was a government-backed development corporation that was established in 1987 to fund and manage regeneration projects in the former-county of Cleveland in North East England.

The Tees Valley Giants was intended as a £15 million series of five art installations by sculptor Anish Kapoor and structural designer Cecil Balmond. The artwork was planned to be created in the towns of Darlington, Hartlepool, Middlesbrough, Redcar and Stockton on Tees in the Tees Valley area of England. The project was launched in July 2008 by Tees Valley Regeneration. If completed, the project would become the world's biggest public art project. 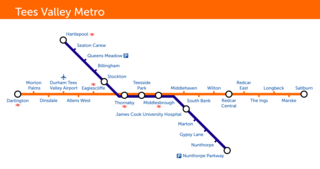 The Tees Valley Metro was a project to upgrade the Tees Valley Line and sections of the Esk Valley Line and Durham Coast Line to provide a faster and more frequent service across the North of England. In the initial phases the services would have been heavy rail mostly along existing alignments. The later phase would have introduced tram-trains to allow street running. The project was backed by all the local authorities through which the system would have run, the authorities are: Darlington, Hartlepool, Middlesbrough, Redcar & Cleveland and Stockton-On-Tees. Support was also forthcoming from the Department for Transport. The project has been cancelled due to lack of funding. Focus is now on Northern Rail franchise. Of the original "Tees Valley Metro" project, only the construction of a new station at James Cook University Hospital has come to fruition.

The Portrack Incinerator was a municipal waste incinerator and waste-to-energy power station situated on the River Tees at Portrack in Stockton-on-Tees in County Durham, England. 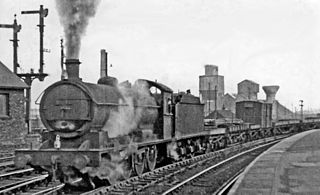 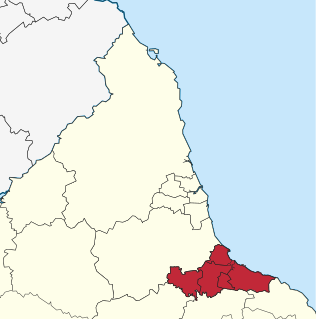 The Tees Valley Combined Authority (TVCA) is the combined authority for the Tees Valley urban area in England consisting of the following five unitary authorities: Darlington, Hartlepool, Middlesbrough, Redcar and Cleveland and Stockton-on-Tees, covering a population of approximately 700,000 people. It was proposed that a combined authority be established by statutory instrument under the Local Democracy, Economic Development and Construction Act 2009. It will be a strategic authority with powers over transport, economic development and regeneration.