Tunstall is a suburb of Sunderland, Tyne and Wear, England which is mostly a privately purchased estate. It is located to the west of Ryhope, and east of Silksworth. The area was built around a large hill, known as Tunstall Hill. Since 1966 pilgrims have erected crucifixes on the hill every Good Friday. [1]

It is the location of Venerable Bede Church of England Academy, which is on the former site of Ryhope Colliery and later Ryhope golf course.

Grangetown is a suburb of Sunderland in Tyne and Wear, England. It is situated two miles south of Sunderland City Centre and two miles north of Ryhope. Grangetown was previously known for heavy traffic congestion, as it contained the intersection of the original route of the A1018 road and the inner and outer ring roads. Since the opening of the new Southern Radial Route in mid-2008, traffic has become less of an issue in the area. Grangetown is home to many shops and is a popular shopping place for locals. It contains Grangetown Primary School and Southmoor Academy. The borders of Grangetown are Hillview to the west, the sea to the east, Hendon and Ashbrooke to the north and Ryhope to the south. Some main roads in Grangetown are Leechmere Road, Ryhope Road, Queen Alexandra Road and Sea View Road. Sea View Road is a very affluent road in Grangetown and has large houses on the main road and semi-detached houses, detached houses and bungalows on the culs de sacs off it. Sea View Road is home to Sea View House a large family home. 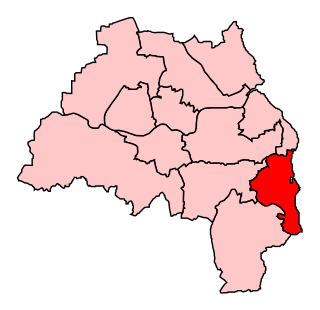 Sunderland Central is a constituency in the House of Commons of the UK Parliament. It is represented by the Labour Party MP Julie Elliott, who has held the seat since its creation in 2010.

The Ryhope Engines Museum is a visitor attraction in the Ryhope suburb of Sunderland, Tyne and Wear, England.

Tunstall Hills is an area of open space in Sunderland, Tyne and Wear, England. It is a Local Nature Reserve and Tunstall Hills And Ryhope Cutting has been designated a Site of Special Scientific Interest both for its geological and biological importance. The area consists of Green Hill and Rocky Hill and surrounding land.

Northumbrian Water Limited is a water company in the United Kingdom, providing mains water and sewerage services in the English counties of Northumberland, Tyne and Wear, Durham and parts of North Yorkshire, and also supplying water as Essex and Suffolk Water. It is a wholly owned subsidiary of Northumbrian Water Group.

The Venerable Bede Church of England Academy is a coeducational secondary school located in the Tunstall area of Ryhope, Sunderland, Tyne and Wear, England. The school is named after Saint Bede, a monk, author and scholar who wrote Historia ecclesiastica gentis Anglorum. 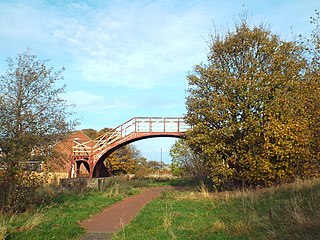