Doxford Park (known locally as Doxy Park) is a suburb of Sunderland, Tyne and Wear, located to the south-west of the city centre. Doxford Park is also the name of a wooded area of land located within the suburb.

Doxford Park has been built up in stages from the mid-1960s onwards, original proposals calling the area "Silksworth Township". It is surrounded by the A19 to the west, farmland to the south, Silksworth to the North, and Tunstall to the east. It is bisected by the B1286 Doxford Park Way dual carriageway.

Many of the houses in Doxford Park were becoming unsafe and uneconomic to repair so Gentoo (formerly the Sunderland Housing Group) is undertaking a massive programme of renewal to redevelop the estate.

Renamed 'Beckwith Green' the development has been split into 6 phases with phases 1 to 3 of the project now complete. Plans for a new £11.6m retirement village on the Beckwith Green development were announced by Gentoo, and will be phase 4 of the regeneration program. Work is due to start on this phase in March 2013 and be completion in mid-2014.

The plans for Phase 4 include 40 extra care apartments, 40 apartments and 14 bungalows. The aim is to create a village where residents can continue to live independently but with support always to hand.

Planning permission for phase 5 of the regeneration program was submitted to Sunderland Council in Nov 2012 - however there has been no confirmation from Gentoo as to when construction on phase 5 will commence.

At the centre of the suburb lies a shopping centre built in the late 1970s and initially named the President Carter Shopping Centre, after it was opened by U.S. President Jimmy Carter during an official visit to the region in 1977. Following redevelopment in mid-1990s the centre is now a large Morrisons supermarket.

Doxford Park is home to one school Mill Hill Primary School and an adjoining nursery [Mill Hill Nursery]. The Portland School for children with special needs was opened in the nearby Chapelgarth area in December 2001 by Prime Minister Tony Blair. For secondary education, most children from the area go to Farringdon Community Academy in the nearby estate of Farringdon.

The Doxford International Business Park is located less than a mile away from the estate. 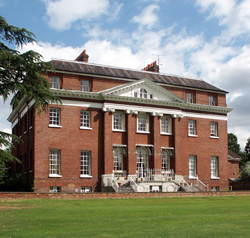 Calcot, or Calcot Row, is a suburb west of Reading in the English county of Berkshire. Calcot straddles the historic A4 Bath Road and is between ex-hamlet Horncastle and Junction 12 of the M4 motorway. The suburb of Tilehurst is to the north, taking up the hills above the place; the populous village of Theale is west, across the motorway. Its named neighbourhoods include Beansheaf Farm and Fords Farm mainly of the early 21st century in its south.

Doxford International is a 125-acre (51 ha) business park located at the A19 / A690 interchange on the outskirts of Sunderland, in the North East of England. Previously it was a greenfield site, it was designated as an Enterprise Zone in 1990 in response to the decline of the area's former ship building and coal mining industries. A partnership between Sunderland City Council and Goodman Property has seen the creation of 1,350,000 sq ft (125,000 m2) of high-specification offices, with the private sector partner investing around £200 million. The first buildings were completed in 1992, providing accommodation for a range of businesses that have played a key role in the regeneration of the City.

Doxford may refer to:

Hackbridge is a suburb in the London Borough of Sutton, south-west London, just over two miles north-east of the town of Sutton itself. It is 8.8 miles (15 km) south-west of Charing Cross.

Gilley Law or otherwise known as Lakeside Village is a neighbourhood in Sunderland, England.

South Acton in Acton, West London, is 6.4 miles (10.3 km) west of Charing Cross. At the 2001 census, Acton, comprising the wards of East Acton, Acton Central, South Acton and Southfield, had a population of 53,689 people.

Doxford House is an 18th-century mansion in the Silksworth area of Sunderland, Tyne and Wear, England. It is a Grade II* listed building.

Plains Farm is a suburb of Sunderland, Tyne and Wear, England, and is a council-built housing estate, erected in the 1940s. Neighbouring areas include Silksworth, The Barnes, Thorney Close, Springwell and Farringdon. The housing in the area is run predominantly by Home Group and Gentoo Sunderland. Many houses are rented via the two companies; others have been purchased by home owners. The majority of housing is either Terraced or Semi Detached.