Harraton was a township in Chester-le-Street parish, and a sub-district in Chester-le-Street registration district, Durham. Since 1974 it is located in the City of Sunderland in the county of Tyne and Wear. The township lies on the river Wear, and on the North-eastern railway; now a cyclist route/footpath, 3 miles north-east of Chester-le-Street; includes the villages of Chaters-Hough, Fatfield, and Picktree; and forms part of the chapelry of Birtley. [1] The soil and subsoil are clay. The chief crops are wheat, oats and turnips. A considerable portion of Lambton Park, the seat of the Earl of Durham, and the castle and gardens, being on the north side of the river Wear, are in the township of Harraton, but for particulars see Lambton Castle. [2]

In 1870-72 Wilson (1872) described Harraton thus: the manor belongs to the Earl of Durham; and has his seat, Lambton Castle, on an eminence adjacent to the Wear. There is a chapel-school of the Established church, and chapels for Wesleyans and Primitive Methodists. The sub-district contains Washington parish, and six townships and a chapelry of Chester-le-Street parish. [1]

The parish church of Harraton is called Fatfield St George for historical reasons. [3] The church was built in 1879 on land given by the Earl of Durham. The church was massively reordered in the 1980s and inside is warm, light and contemporary, reflecting the informal and lively style of worship that takes place. [4]

Harraton Colliery Chapel was built in 1873 financed by the Earl of Durham and is of brick construction seating 150, the building is still standing. It was used by the Primitive Methodists. This particular branch of Methodism had as its aim the recovery, as they saw it of the principles and practice of the early Methodists which had been lost or at least played down. The chapel was the chosen place of worship for believers of the working classes, where as the Anglican Church was seen as the domain of the “bosses”. The Chapel functioned as a place of worship until 1932 when it closed. [5]

Coal was extensively worked; but the majority of the coal pits are exhausted. [1]

Row Pit, Harraton Colliery was the scene of a fatal explosion on Monday, 30 June 1817. Some miners were sent to work in an area of the colliery which was not free from firedamp and the men were expressly ordered to use safety lamps. One man, John Moody, ignored this instruction and was observed using a candle. [6] The overman ordered Moody to extinguish the candle, which he did. Shortly afterwards Moody was again found using a candle and reprimanded. He extinguished the candle and lit his lamp. The overman had just left him when the explosion occurred. [7] 38 of the 41 men underground were killed, including a grandfather, his two sons and seven grandsons. [7]

Two days later eight workmen descended Nova Scotia Pit, part of the same colliery. When they did not return another party went down but were forced back by chokedamp. Late on the following day six bodies were recovered and there was "little hope of recovery for the other two". [7] All eight were recorded as being buried on 5 July. [8]

The pit closed in May 1965, [9] with many of the miners' migrating to the modern pits in Nottinghamshire. The poet Jock Purdon wrote Farewell to Cotia about the pit's closure and the "exodus" to Nottinghamshire.

Washington is a new town in the City of Sunderland local government district of Tyne and Wear, England, and part of historic County Durham. Washington is located geographically at an equal distance from the centres of Newcastle, Durham and Sunderland, hence it has close ties to all three cities.

Adlington is a town and civil parish in Lancashire, England, near the West Pennine Moors and approximately three miles south of Chorley. It became a separate parish in 1842 then grew into a township around the textile and coal mining industries until these closed in the 1960s. It had a population of 5,270 at the 2001 census, but in the last decade this has risen by over 2,000 more people to 7,326. The measured population at the 2011 Census was 6,010.. The Leeds and Liverpool Canal runs through the village and is host to White Bear Marina which is the largest marina on the Leeds & Liverpool Canal. 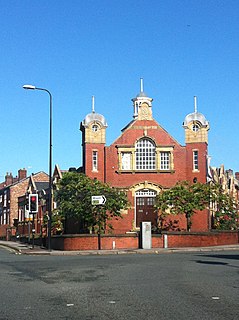 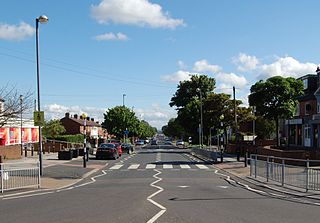 Coppull is a village and civil parish in Lancashire, England. It is part of the Borough of Chorley, lies around 300 feet (91 m) above sea level. Its population is around 8,000, having been counted at 7,959 in the 2011 Census. It is bounded by Whittle Brook, Clancutt Brook, the River Yarrow, Eller Brook, Hic-Bibi Brook and Stars Brook. Coppull is located between Chorley and Standish, Greater Manchester, to the east of the A49 road near Charnock Richard.

Escomb is a village on the River Wear about 1 1⁄2 miles (2.4 km) west of Bishop Auckland, County Durham, England. Escomb was a civil parish until 1960, when it and a number of other civil parishes in the area were dissolved. 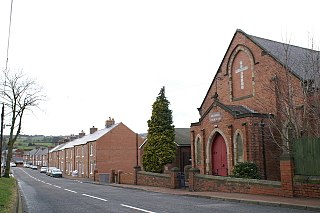 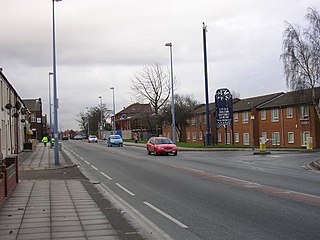 Fatfield is a village in Washington new town in the City of Sunderland local government district, in Tyne and Wear, England. 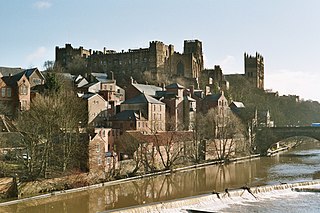 Rickleton is a village which lies within the district of Washington, Tyne and Wear, England. It is located on the south side of Washington Town and borders Harraton village, Birtley and County Durham. The village centre includes a Londis supermarket, a general store, a hairdressing salon, Finewood Chinese takeaway and a bus link, which has buses linking to other areas of Washington and County Durham. A family pub, The Woodlands, Washington Cricket club, two doctors surgeries and a chemists can also be found here. There is also a large field with a small children's playing area located just of the bus route through Rickleton.

Lambton Collieries was a privately owned colliery and coal mining company, based in County Durham, England.

The Lambton Railway was a private industrial railway in County Durham, England, constructed initially as a tramway from 1737, to enable coal to be transported from Lambton Collieries to the Port of Sunderland. It closed under the ownership of the National Coal Board in August 1967.