Shiremoor (originally called Tynemouthshire Moor) is a large village in the Metropolitan Borough of North Tyneside. It is located approximately 3.5 miles (5.6 km) inland of Whitley Bay and approximately 3 miles (4.8 km) north of The Tyne Tunnel. A mile or so north of Shiremoor, the extensive built-up areas of North Tyneside change abruptly into green belt stretching north into south east Northumberland. It has a population of 4,782. [1]

Shiremoor is not historically a centre of population but many housing estates were built there in the 20th and 21st centuries. Shiremoor was first built as a colliery village to accommodate the miners of the local pits.

Shiremoor comprises numerous estates. They include the oldest two estates of Bertram Grange and Old Shiremoor. As well as Park Estate, Leeches Estate, and Shiremoor. In the early 2000s a new area was built, known as Northumberland Park. Although built as a separate village, estate agents refer to it as being a part of Shiremoor. Earsdon View is the newest estate to be built to the north of Shiremoor.

The original name, Tynemouthshire Moor, refers to the common of the manor of Tynemouth. The area grew as a result of the coal industry, developed to house miners from the local pits. [2]

As the coal industry in the area declined, Shiremoor became a commuter area and more recently serves as a commercial centre. [3]

Shiremoor colliery was linked to the North Eastern Railway by the Blyth and Tyne Railway. The old railway route is now a walking route known as The Wagon Way.

Every year the local people hold a "treat" for the children of Shiremoor and surrounding villages. This tradition dates back to 1907 and has been held every year since. It was started by a group of men from the local pit and today is run by a committee of local people.

The "treat field" was originally located along Algenon Drive. However, due to new developments being built it was relocated in the early 21st century to Earsdon road, near the Grey Horse pub.

The Treat itself comprises many events that the local schools take part in. There is an art competition, a dance display, many sports competitions, including football, netball and hockey. There is always a tea tent ran by the locals. Today there is a fun fair held alongside the Treat.

Each year the children of the local schools receive a free "Treat Ticket". The ticket gets them an ice cream and a souvenir.

The local schools meet outside their school and "march" to the treat. This is usually led by a band, and the school banner. Many local people join in the march as it is seen as very much a local tradition. [4]

The Shiremoor Treat was cancelled in 2020 for the first time in its history due to the global COVID-19 pandemic.

There is a Primary School located in Shiremoor, described by Ofsted as an outstanding school. [5] It provides for children aged up to age 11, including nurseries for 2+. It is a large school with 350+ students and 52 places in the preschool nursery.

In 2011 it was designated as a teaching school.[ citation needed ]

North Tyneside Council's Pupil Referral Unit is located in Shiremoor. It is called Moorbridge and was opened in 2010. It caters for KS3 and KS4 children with Behavioural, Emotional and Social difficulties with up to 60 places. [6]

To the east of Shiremoor, in the Whitley Bay area, the schools still runs on the three tier system and therefore, Shiremoor also fall into different catchment areas for both Middle and High schools.

There is a Resource Centre on Earsdon Road which comprises two Doctors Surgeries, Pharmacy and a Library. The doctors houses 2 practises. [7]

There is also a One to One Centre located in the old Doctors building, on Brenkley Avenue. They offer Sexual Health services to the local community and the rest of North Tyneside. [8]

There is one dentist in Shiremoor, located on Lesbury Avenue, near the Metro station. [9]

There is a St. John Ambulance day centre in Shiremoor and sheltered accommodation in Emmerson Court. [6]

The Church of England parish church of Shiremoor is located on Brenkley Avenue. [10]

There is a Salvation Army church located on Lesbury Avenue.

The Catholic Parish for the area is Our Lady Star of the Sea. [11]

Since the early 2000s, Shiremoor has been subjected to substantial residential development alongside the A19 corridor.

There was also extensive work carried out on a new residential area in the north, Earsdon View, alongside the A19 corridor. Between Shiremoor and Earsdon.

An adventure playground was built on Brenkley Avenue, nearby to St Mark's Church [12] and Shiremoor Primary School.

Patrick King was the first person to be awarded the George Medal, for rescuing a blind woman during an air raid in World War II. [13]

Bryan Hewison was born and spent his formative years in Shiremoor. Bryan gained a scholarship to the Royal Ballet (just as depicted in the film Billy Elliot ) where he achieved the position of soloist. He then had a long and successful career at La Scala, Milan, dancing as Soloist for the Theatre Ballet Company. [14]

Jackie Robinson, professional footballer, was born and died in Shiremoor. He played for Sheffield Wednesday and Sunderland FC. Played for England 1937–1939, until the Second World War. Scored twice against the German national team in 1938, in front of Hitler, when the English team were ordered to do the Nazi salute.

Wallsend, historically Wallsend on Tyne, is a town in the metropolitan borough of North Tyneside in the metropolitan county of Tyne and Wear, North East of England. Traditionally, Wallsend was located in the county of Northumberland. Wallsend derives its name from its location at the eastern end of Hadrian's Wall. It has a population of 42,842 and lies 3.5 miles east of Newcastle City Centre. The population of the Wallsend ward of the North Tyneside Borough was at the 2011 census 10,304. 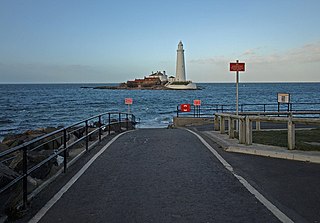 Tynemouth is a large town and a historic county borough in Tyne and Wear, England, at the mouth of the River Tyne, 8 miles (13 km) east-northeast of Newcastle upon Tyne. Historically part of Northumberland. It is administered as part of the borough of North Tyneside, but until 1974 was an independent county borough, which included North Shields. It had a population of 17,056 in 2001. The population of the Tynemouth ward of North Tyneside was 10,472 at the 2011 Census.

Wellfield and South Wellfield is a village in nWhitley Bay, England, between Monkseaton and Earsdon. It is a residential suburb built between the 1920s and 1950s. The older properties are towards Earsdon, the newer ones closer to Monkseaton.

West Allotment is a village in the Metropolitan Borough of North Tyneside. Prior to 1974 it was part of Northumberland. It is located approximately 4 miles (6.4 km) inland of Whitley Bay and approximately 3 miles (4.8 km) north of The Tyne Tunnel. A mile or so north of West Allotment, the extensive built-up areas of North Tyneside change abruptly into green belt stretching north into south east Northumberland.

John Gair "Jack" Robson was an English schoolmaster, musician and songwriter. Many of his 40-plus songs are in Geordie dialect. His most famous song must be "Whereivvor ye gan ye’re sure te find a Geordie".

Meadow Well is an area near North Shields, North East England. Historically in Northumberland, it is now part of the Tyne and Wear Metropolitan county. The population in 2016 was approximately 11,000.