Last updated June 29, 2021
For other places with the same name, see Lemington (disambiguation).
Ward in England

Lemington is an area and electoral ward of Newcastle upon Tyne in North East England. [2]

Lemington has a strong industrial history. It is famous for its brick glassworks cone, built in 1787. The River Tyne used to pass very close to Lemington, until the Tyne Improvement Commission cut a new, shorter, straighter channel over the Blaydon Haugh, leaving behind the Lemington Gut. Also visible are the ruins of the former Tyne Iron Company Ironworks which were built in 1797 and decommissioned in 1886. Its coke ovens are still evident near Lemington Power Station. The power station was built in 1903 to supply the tram system with electricity. It was largely demolished in 1946. The remains of Lemington Staithes can be seen on the Lemington Gut near the power station. The staithes used to mark the end of the North Wylam to Lemington Point waggonway, which took coal from the local collieries to the staithes for export. [3] On 12 July 1875 Lemington Station opened on the Scotswood, Newburn & Wylam Railway. On 15 September 1958 the station closed to passengers and on 4 January 1960 the station was closed to goods, but the lines weren't lifted until 1992, when the Ever Ready battery factory in Newburn closed. [4] The Anglo Great Lakes Graphite Plant which operated in the area, also closed around this time.

In 1843 the lemington graveyard made way for industrial development. This was later used for school grounds. In the 2000s the school was demolished to make way for housing.

Today, it is largely a residential area of the city and includes the large Dumpling Hall housing estate which was constructed in the 1960s and 1970s. 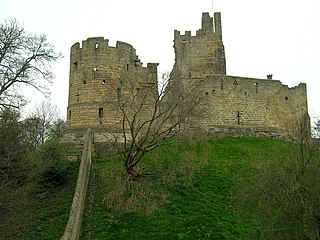 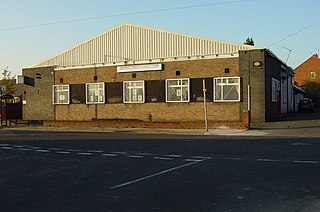 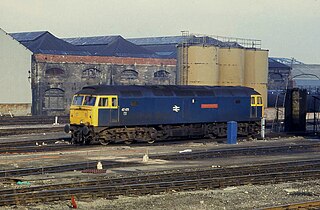 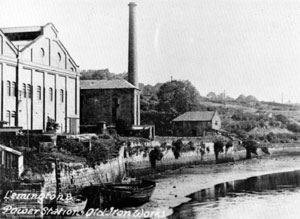 Lemington Power Station was a small, now demolished coal-fired power station, located in North East England. It was situated on the Lemington Gut, a backwater of the River Tyne, at Lemington, 3.5 mi (5.6 km) west of Newcastle upon Tyne. The station's main building stood until 2017 as a rare example of an early power station, dating from before the nationalisation of the United Kingdom's electrical supply industry. 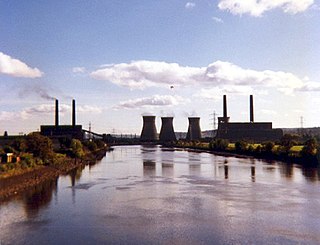 The Stella power stations were a pair of now-demolished coal-fired power stations in the North East of England that were a landmark in the Tyne valley for over 40 years. The stations stood on either side of a bend of the River Tyne: Stella South power station, the larger, near Blaydon in Gateshead, and Stella North power station near Lemington in Newcastle. Their name originated from the nearby Stella Hall, a manor house close to Stella South that by the time of their construction had been demolished and replaced by a housing estate. They operated from shortly after the nationalisation of the British electrical supply industry until two years after the Electricity Act of 1989, when the industry passed into the private sector.

Lemington Glass Works was the site of glass production in Lemington, Newcastle upon Tyne, England, for over 200 years. All that remains now is its iconic last glass cone, a famous local landmark. 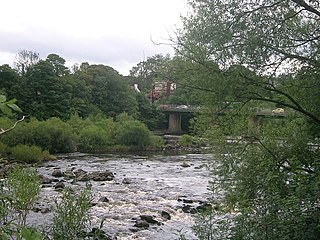 Wylam Bridge is a road bridge in Northumberland, England linking the residential area of North Wylam and neighbouring villages of Heddon-on-the-Wall, and Horsley with the railway station in South Wylam as well as west Gateshead, including the villages of Ryton and Crawcrook. 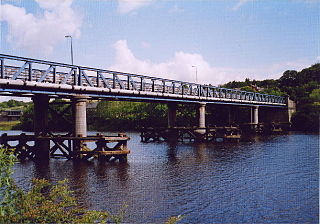 Newburn Bridge is a road bridge crossing the River Tyne at Newburn in Newcastle upon Tyne, England. It links Newburn, Walbottle and Throckley on the north side of the river with Ryton, Stella and Blaydon on the south side. The bridge is the westernmost crossing of the Tyne in the county of Tyne and Wear; the next crossing upstream, Wylam Bridge, is in Northumberland.

The Anglo Great Lakes Graphite Plant was a large graphite works situated in the North East of England. It was positioned at Lemington in Newcastle upon Tyne, on the north bank of the River Tyne. The plant was operated by the Anglo Great Lakes Corporation and produced high grade carbon for use in Magnox nuclear reactors, Advanced Gas-cooled Reactors and low grade carbon for use in carbon arc burning. 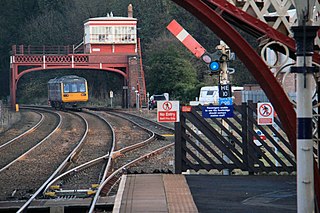 Newburn station was a railway station serving the village of Newburn, Newcastle upon Tyne. The station was situated at the bottom of Station Road, near Newburn Bridge, and was on the Scotswood, Newburn and Wylam Railway, a branch line of the Newcastle and Carlisle Railway.

The Scotswood, Newburn and Wylam Railway was a railway company that built the 6+1⁄2 miles (10.5 km) North Wylam branch or North Wylam loop on the former Newcastle & Carlisle Railway. The loop line opened between 1871 and 1876 and followed the former Wylam waggonway past the cottage where George Stephenson was born. The company was taken over by the North Eastern Railway in 1883.

Newburn Steelworks was a large steel mill on the banks of the River Tyne at Newburn, near Newcastle upon Tyne, North East England.

Christopher Blackett owned the Northumberland colliery at Wylam that built Puffing Billy, the first commercial adhesion steam locomotive. He was also the founding owner of The Globe newspaper in 1803. 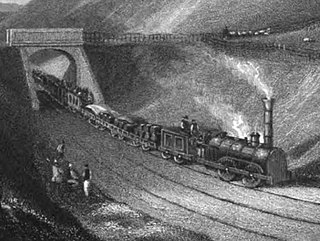 Lemington railway station served the district of Lemington, Newcastle-upon-Tyne, England from 1875 to 1964 on the Tyne Valley Line.