Greenside is in the outer west of Gateshead, between the villages of Crawcrook and High Spen and not far from the small town of Ryton.

It also lies near the old lead route that ran from the north Pennines to Tyneside.

Largely rural in nature, Greenside was built upon coal mining and agriculture. With the creation of Greenside colliery, along with the nearby collieries of Emma, Clara and Stargate, the area grew in importance and its coal industry became extensive. By the early 20th century Greenside had the largest colliery in the district. The colliery closed in July 1966, the last shift being worked on Saturday 23 July.

In 2016 Banner Tales – an organisation dedicated to researching and maintaining the village's mining and industrial heritage – instituted the "Last Shift Festival" and this has now, under the title "Greenside Banner Festival", become an annual event. Each year the Greenside Miner's Lodge Banner is marched through the village accompanied by a Brass Band before joining the many other banners at Durham Miner's Gala. Banner Tales also organise an annual Greenside Community Picnic in the spirit of the miners' picnics of the past.

The wagonways used to transport coal, present in both Greenside and Crawcrook, provide a reminder of the area's importance in the coal trade. Although these routes are not used to transport coal any more, they are maintained as public footpaths, taking walkers through the surrounding countryside.

Greenside has many residents of Irish descent, who can trace their heritage back to the influx of Irish miners into the town in the 19th century.

In local government, Greenside is within the Crawcrook, Greenside and Clara Vale ward, which lies west of Gateshead and borders Northumberland.

Greenside is within the parliamentary constituency of Blaydon. Its current MP is Labour's Liz Twist.

After the decline of the coal industry, Greenside has not suffered the great deprivation that many other former mining areas have. One of the least deprived of Gateshead's wards, it is used increasingly as a commuter village for professionals travelling into the more urban areas of Tyneside.

Although it has not suffered the decline that many provincial villages have nationally in terms of local services, Greenside offers only a small selection of shops and business. For further groceries and white goods, residents can travel to the MetroCentre, Europe's largest shopping centre, around four miles towards Gateshead, as well as the shopping areas of Newcastle-Upon-Tyne.

There is an adequate, although declining, public transport service. Bus services operate to Crawcrook, Ryton, Blaydon, the MetroCentre and Newcastle. Residents wishing to travel west, past the county border into Northumberland and its towns such as Prudhoe, Stocksfield, Corbridge and Hexham can do so on one of a number of Go North East buses that depart from Crawcrook.

North East England is one of nine official regions of England at the first level of NUTS for statistical purposes. A part of northern England, it is defined as the metropolitan boroughs of Newcastle upon Tyne, Gateshead, North Tyneside, South Tyneside and City of Sunderland; the ceremonial counties of County Durham and Northumberland; as well as the Teesside area, which is split between County Durham and North Yorkshire. The region is home to three cities: Newcastle upon Tyne, Durham and Sunderland. Large towns in the region include Gateshead, Darlington, Middlesbrough and Hartlepool.

Annfield Plain is a village in County Durham, in England. It is situated on a plateau between the towns of Stanley, 4 km (2.5 mi) to the north-east, and Consett, 8 km (5.0 mi) to the west. According to the 2001 census, Annfield Plain has a population of 3,569. By the time of the 2011 Census Annfield Plain had become a ward of Stanley parish. The ward had a population of 7,774. Along with much of the surrounding area, Annfield Plain's history lies in coal mining. While the industry collapsed in the 1980s and 90s, its effects are still apparent both in the landscape and in folk memory. 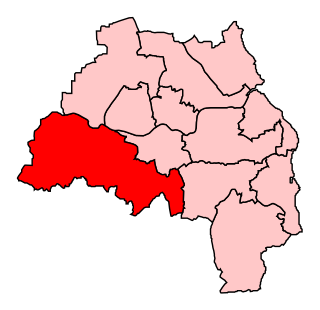 The County Palatine of Durham, commonly referred to as County Durham or simply Durham, is a historic county in the Northern England. Until 1889, it was controlled by powers granted under the Bishopric of Durham. The county and Northumberland are also traditionally known together as Northumbria.

Thorp Academy is a large 11–18 secondary Academy in Ryton Tyne & Wear. The academy was established in the 19th century by Charles Thorp who went on to found Durham University. The site that Thorp Academy now stands on is the site of the original school established by Charles Thorp. In the early 2010's, Gateshead Council merged Ryton Comprehensive School and Hookergate School in High Spen. With the two schools merging, the school was renamed Charles Thorp Comprehensive School. The school later converted into an academy sponsored by Northern Education Trust and was renamed as Thorp Academy.

Thomas Young Hall was an internationally acclaimed mining engineer and coal mine owner. A native of Tyneside, he was a well-known figure in Newcastle in the mid-nineteenth century. Born in Greenside on 25 October 1802, his father, James Hall, was a mining engineer, manager of the Folly Pitt, and agent to several leading coal mine owners including the Dunns, G. Silvertop, Capt. Blackett, W. P. Wrightson, P. E. Townley, and John Buddle.