Virtually all of Seaburn consists of low-density private housing interspersed with open parkland, laid out in the middle of the 20th century. Much of the housing is amongst the most expensive in Sunderland, with many large mansion houses situated along the coast, and on adjoining streets.

The seafront is home to a sandy blue flag beach, seaside promenades, 2 amusement arcades, children's playgrounds, fish and chip shops, small guest houses and one four star hotel, operated by Marriott. The main shopping street is Sea Road, which runs from the seafront up through Fulwell to the Seaburn Metro station.

The area around Queens Parade hosts a 'strip' of popular eateries, with three Italian, two Indian and two Chinese restaurants in operation as of 2009. Also trading are several pubs and coffee shops. In the late 1980s, the old Seaburn Hall site was redeveloped, with a Morrisons supermarket, new amusement park and leisure and fitness centre. Previously, Seaburn Hall had been a famous dance hall and live music venue. It was built in 1939 as part of a development scheme which also included the seafront and a funfair. [1]

Seaburn was a favourite place of the painter L. S. Lowry. [2] A large Lowry painting is displayed in the local Morrisons supermarket.

The area was close to the Sunderland A.F.C. stadium Roker Park and was the origin of the hooligan firm the Seaburn Casuals. [3]

The popular Sunderland International Airshow is held on the coast at Seaburn and Roker and is the largest free event of its kind in Europe, with a variety of aircraft, civilian and military aircraft on display. [4]

On the Tyne and Wear Metro Seaburn is served by its own station.

The suburb is part of the Fulwell ward on Sunderland City Council, and is represented by three Conservative councillors. 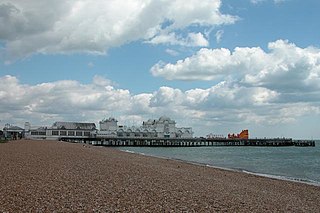 Southsea is a seaside resort and geographic area, located in Portsmouth at the southern end of Portsea Island, Hampshire, England. Southsea is located to the south of Portsmouth city centre and to the east of Old Portsmouth. 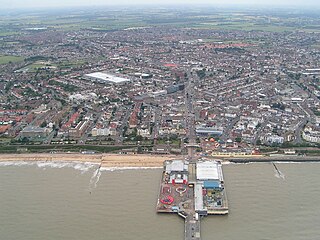 Clacton-on-Sea is the largest town in the Tendring peninsula and district in Essex, eastern England, and was founded as an urban district in 1871. It is a seaside resort that saw a peak of tourists in the summer months between the 1950s and 1970s. 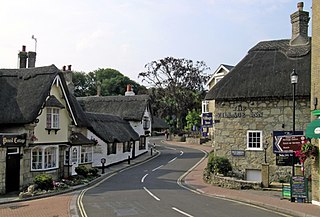 Shanklin is a seaside resort and civil parish on the Isle of Wight, England, located on Sandown Bay. Shanklin is the southernmost of three settlements which occupy the bay, and is close to Lake and Sandown. The sandy beach, its Old Village and a wooded ravine, Shanklin Chine, are its main attractions. The esplanade along the beach is occupied by hotels and restaurants for the most part, and is one of the most tourist-oriented parts of the town. The other is the Old Village, at the top of Shanklin Chine. Together with Lake and Sandown to the north, Shanklin forms a built up area of 21,374 inhabitants (2011).

Castle Point is a local government district with borough status in south Essex, 30 miles (48 km) east of central London. The borough comprises the towns and villages of Canvey Island, Hadleigh, South Benfleet, and Thundersley where the council has its headquarters.

Lee-on-the-Solent, often referred to as Lee-on-Solent, is a seaside village in the Borough of Gosport in Hampshire, England, about five miles (8 km) west of Portsmouth. The area is located on the coast of the Solent. It is primarily a residential area, with an upsurge of mostly local visitors in summer, but was also the former home to the Royal Naval Air Station HMS Daedalus.

Mablethorpe is a seaside town and civil parish in the East Lindsey district of Lincolnshire, England. The population, including nearby Sutton-on-Sea, was 12,531 at the 2011 census, and estimated at 12,628 in 2018. The town was visited regularly by Alfred, Lord Tennyson, a 19th-century Poet Laureate of the United Kingdom. Some features of the town have been named after him, for example, Tennyson Road and Tennyson High School.

Seaview is a small Edwardian resort located on the north-eastern corner of the Isle of Wight, overlooking the Solent. The village is popular with tourists and is 2 1⁄3 miles (3.8 km) from the town of Ryde, where most tourists reach the island by ferry or hovercraft. Together with Nettlestone, it forms a civil parish of Nettlestone and Seaview. 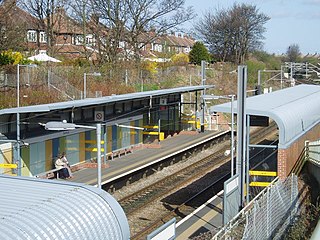 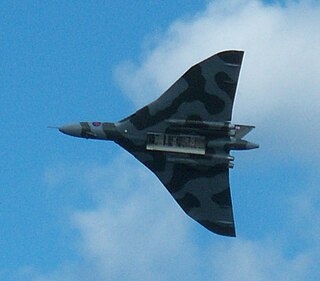 The Sunderland International Airshow is the biggest free annual airshow in Europe, held at the Roker and Seaburn seafronts. It takes place over the course of three days, usually the final weekend in July, and attracts around 2,000,000 spectators every year. The airshow features a large number of planes, including the Red Arrows and the Eurofighter Typhoon. In addition to the planes, the seafront plays host to a range of food counters, stalls and fairground games. The Royal Navy traditionally have a warship off the coast every year, usually HMS Ocean, the adopted warship of Sunderland, however in 2007, HMS Albion made an appearance instead as HMS Ocean had other commitments. The airshow was first held in 1989 as a single day show, and was planned to be a one-off event, when it attracted 250,000 spectators. Due to its success, from 1991 it became a two-day show, and subsequently three days. Due to thick fog and mist in 2008 and in 2020 due to covid-19 the airshow was cancelled, nothing flew. Some aviation fans stayed the whole weekend. The Friday night launch, which started back in 2010, shows sunset displays for the majority of the night, but the night is rounded off with gliders with sparklers during the "settling down" period, and then a large firework display ends it all.

Sunderland A.F.C. supporters are the followers of Sunderland A.F.C. an English professional football club based in the city of Sunderland, Tyne and Wear. Sunderland A.F.C. were formed in 1879 and joined The Football League for the 1890–91 season. They experienced an immediate period of success with five league titles in a decade between 1892 and 1902, and added subsequent titles in 1913 and 1936. Supporters of the club, and people from Sunderland in general, are traditionally called Mackem's, but during their near century long tenure at Roker Park they were also referred to as Rokerites and Rokermen.