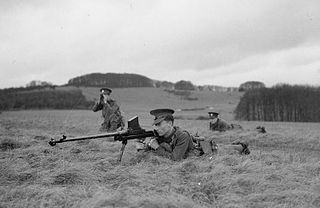 The Rifle, Anti-Tank, .55in, Boys, commonly known as the "Boys Anti-tank Rifle", was a British anti-tank rifle in use during the Second World War. It was often nicknamed the "elephant gun" by its users due to its size and large bore.

The Special Naval Landing Forces (SNLF), were the marine troops of the Imperial Japanese Navy (IJN) and were a part of the IJN Land Forces. They saw extensive service in the Second Sino-Japanese War and the Pacific theatre of World War II.

The Ordnance Quick-Firing 6-pounder 7 cwt, or just 6-pounder, was a British 57 mm gun, serving as a primary anti-tank gun of the British Army during World War II, as well as the main armament for a number of armoured fighting vehicles. The gun was also adopted as the standard anti-tank gun of the US Army.

The Type 97 automatic cannon is a 20-millimeter (0.79 in) Japanese anti-tank rifle that began development in the 1930s. It was used by the Imperial Japanese Army (IJA) during the Second Sino-Japanese War, the Soviet–Japanese border conflicts and the Pacific War. Ever-greater thicknesses of armour on tanks rendered the Type 97 obsolete by about 1942.

The Type 98 20 mm AA machine cannon was the most common light anti-aircraft gun of the Imperial Japanese Army. It entered service in 1938 and was used until the end of World War II. After World War II this gun was used by the Indonesian Army in the Indonesian National Revolution and North Vietnam in First Indochina War. 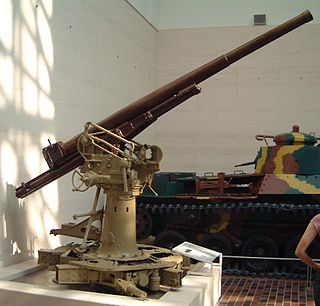 The Type 88 75 mm AA gun was an anti-aircraft gun used by the Imperial Japanese Army during the Second Sino-Japanese War and World War II. The Type 88 number was designated for the year the gun was accepted, 2588 in the Japanese imperial year calendar, or 1928 in the Gregorian calendar. It replaced the earlier Type 11 75 mm AA gun in front line combat service, and at the time was equal in performances to any of its contemporaries in western armies and was considered capable of handling any targets the Japanese army was likely to encounter on the Asian mainland. Although it was soon overtaken by improvements in aircraft technology and was largely obsolete by 1941, it continued to be used on many fronts until the end of the war.

The Type 4 75 mm AA gun was an anti-aircraft gun developed by the Imperial Japanese Army,They started producing the gun in 1943. The Type 4 number was designated for the year the gun was accepted, 2604 in the Japanese imperial year calendar, or 1944 in the Gregorian calendar. Due to the lack of raw materials available and the great damage by air raids to its industrial infrastructure, only 70 units were made. These units were retained for defense of the Japanese home islands during World War II.

Teishin Shudan was a Japanese special forces/airborne unit during World War II. The unit was a division-level force, and was part of the Imperial Japanese Army Air Force (IJAAF). The Teishin units were therefore distinct from the marine parachute units of the Special Naval Landing Forces.

This article deals with the history and development of tanks of the Japanese Army from their first use after World War I, into the interwar period, during World War II, the Cold War and modern era.