The Kembla Grange Racecourse [3] and its railway station are located there. 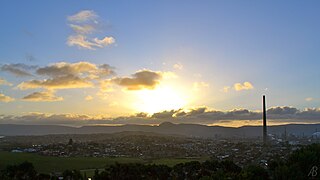 Pambula is a town in Bega Valley Shire on the far south coast of New South Wales, Australia 473 kilometres (294 mi) south of Sydney via the Princes Highway. At the 2016 census, Pambula had a population of 970 people. 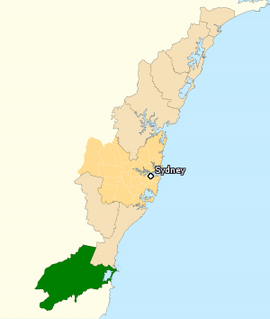 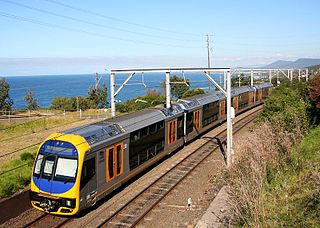 Kembla Grange is a single-platform intercity train station located in Kembla Grange, New South Wales, Australia, on the South Coast railway line. The station serves NSW TrainLink trains travelling south to Kiama and north to Wollongong and Sydney. The station ranked equal last for patronage on the metropolitan network in 2012, and was one of 23 on the metropolitan rail network to record an average of fewer than one passenger per day in 2014.

Coniston is a suburb of Wollongong in New South Wales. At the 2016 census, it had a population of 2,268. 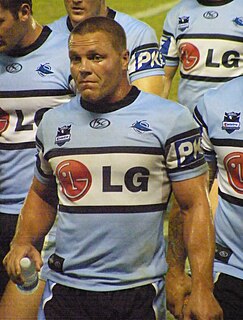 Corey Hughes is an Australian former professional rugby league footballer who played in the 1990s and 2000s. A City New South Wales representative hooker, he played in the National Rugby League (NRL) for Canterbury-Bankstown and Cronulla-Sutherland Sharks. Corey Hughes is the youngest brother of former Bulldogs players, Glen Hughes and Steven Hughes. He is the son of former Canterbury five-eighth, Garry Hughes. 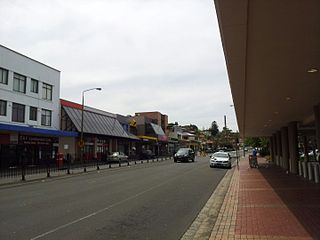 Warrawong is a suburb of Wollongong in the Illawarra region of New South Wales, Australia. It is situated on the northeast corner of Lake Illawarra.

Kembla Heights is a village west of Wollongong, New South Wales in the Parish of Kembla County of Camden. It is situated along Harry Graham Drive and upper Cordeaux Road and is part of a tourist route that runs along the Illawarra escarpment for a distance between Mount Kembla and Mount Keira. The Dendrobium Colliery is located in Kembla Heights.

Farmborough Heights is a southern, medium-high wealth suburb in the city of Wollongong, New South Wales, Australia. It is situated to the west of Unanderra in the foothills of Mount Kembla. The suburb mainly consists of separate residential dwellings, but also has a general store. It once had a take away, though the take away and many other stores were demolished in 2010 to make room for more housing.

The Kembla Grange Classic, registered as the Keith F Nolan Classic, is an Illawarra Turf Club Group 3 Thoroughbred horse race, for three-year-old fillies, at set weights with penalties, over a distance of 1600 metres, held annually at Kembla Grange Racecourse in New South Wales, Australia in March. Total prize money for the race is A$200,000 including trophies.

Mount Saint Thomas is a suburb of Wollongong in New South Wales, lying east of Figtree and South west of Wollongong. At the 2016 census, it had a population of 1,468.

Avondale is a village in New South Wales. It is located just west of Lake Illawarra. At the 2016 census, it had a population of 1,653.

The Illawarra Folk Festival started in 1985 in Jamberoo, New South Wales. It has grown to become one of the largest festivals in Australia run entirely by volunteers from the Illawarra Folk Club Inc.

Wollongong-Kembla, an electoral district of the Legislative Assembly in the Australian state of New South Wales was created in 1941 and abolished in 1968.