Last updated January 25, 2023
Nonprofit organization dedicated to the protection of the nature of Massachusetts

The Massachusetts Audubon Society was born out of Harriet Hemenway's desire to stop the commercial slaughter of birds for women's ornamental hats. Hemenway and her cousin, Minna Hall, soon enlisted 900 women and formed a partnership with many from Boston's scientific community to form their organization. They named the organization the Massachusetts Audubon Society in honor of the bird painter John James Audubon. In 1905, a national committee of Audubon societies was developed. This committee was vital in passing the Migratory Bird Conservation Act in 1913 and the Migratory Bird Treaty Act of 1918 with Great Britain. The passage of these measures effectively eliminated the commercial plume trade. [2]

Mass Audubon's first wildlife sanctuary, Moose Hill Wildlife Sanctuary in Sharon, Massachusetts, dates back to 1916 when the board accepts an offer of Sharon resident George Field to use his property as a bird sanctuary. Mass Audubon purchased the parcel in 1922. [2]

Mass Audubon's statewide network of more than 100 wildlife sanctuaries [3] welcomes visitors of all ages and is a home for more than 150 endangered and threatened native species. Some of the sanctuaries, as noted below, have staffed nature centers or museums.

The following large sanctuaries are on the list noted as "Not Ready for Visitors": [3]

Camp Wildwood, established in 1950, is the Society's only overnight summer camp, and it is accredited by the American Camp Association. [4] The 159 acre camp is currently located in Rindge, New Hampshire, on Hubbard Pond, bordering 1,494-acre Annett State Forest. [4] This is the camp's third location, which it moved to in 2003 after previously being a boy scout camp called Camp Quinapoxet. [5] [6] [7] [8] The property includes a central shower house, arts and crafts center, 135-seat dining hall, health center, office, camp store, seven cabin sites, an archery range, high and low ropes challenge course, playing field, and several trails and areas of forest and wetland for exploration. [8]

Camp Wildwood was originally located at Greenfield State Park in Massachusetts until 2003, when it moved to its current location. [8]

Wellfleet is a town in Barnstable County, Massachusetts, United States, and is located halfway between the "tip" and "elbow" of Cape Cod. The town had a population of 3,566 at the 2020 census, which swells nearly sixfold during the summer. A total of 70% of the town's land area is under protection, and nearly half of it is part of the Cape Cod National Seashore. Wellfleet is famous for its oysters, which are celebrated in the annual October Wellfleet OysterFest.

The Connecticut Audubon Society Coastal Center at Milford Point is a nature center and bird sanctuary in Milford, Connecticut, established in 1995. Over 300 different species of bird have been observed at this location. The Coastal Center is located on an 8.4-acre (34,000 m2) barrier beach—the Smith-Hubbell Wildlife Refuge & Bird Sanctuary—and is situated next to the 840-acre (3.4 km2) Charles E. Wheeler Wildlife Management Area at the mouth of the Housatonic River. The Coastal Center provides easy access to Long Island Sound and its many habitats: tidal salt marshes, barrier beaches, tide pools and coastal dunes, and utilizes these habitats for environmental education for youth and adults. These various environments and habitats support a variety of bird, plant and animal communities for observation and study. The Coastal Center also contains educational exhibits and live animals. 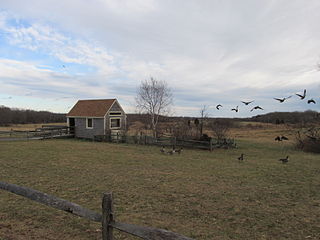 The Daniel Webster Wildlife Sanctuary is a sanctuary owned by the Massachusetts Audubon Society, the largest conservation organization in New England, in the town of Marshfield, Massachusetts. The sanctuary, formerly the farm of Edward Dwyer, statesman Daniel Webster and the William Thomas family of Marshfield, the first English landowner to live on the sanctuary land, was purchased by Mass Audubon in 1984 thanks to the volunteer efforts of the Committee for the Preservation of Dwyer Farm for the People of Marshfield. The sanctuary contains 507 acres (2.1 km2) of mixed cultural grasslands, red maple swamps, a five-tiered wet panne, Webster Pond and a section of the Green Harbor River. It is the site of the annual Daniel Webster Farm Day celebration. Surrounding lands owned by the town of Marshfield and the Marshfield Airport increase the local open space area to more than 1000 acres (4 km2).

The Connecticut Audubon Society Center at Fairfield is a nature center and wildlife sanctuary in the Greenfield Hill area of Fairfield, Connecticut. Constructed in 1971, the center features classrooms for environmental education programs, live animals on display, natural history exhibits, a nature library, a solar greenhouse and a gift shop. Outside there is a compound with non-releasable rescued birds of prey, including owls, hawks, peregrine falcons, a turkey vulture and other raptors.

The Audubon Society of Portland is a non-profit environmental organization dedicated to wildlife conservancy in Portland, Oregon, United States.

Moose Hill Wildlife Sanctuary is a 1,971 acres (798 ha) wildlife sanctuary located in Sharon, Massachusetts. The property is the oldest property of the Massachusetts Audubon Society, established in 1916. It is adjacent to Moose Hill Farm, which is owned by the Trustees of Reservations. 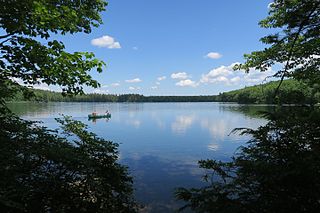 Willard Pond is a small, protected lake in Antrim, New Hampshire, United States. The lake, located in southwestern New Hampshire, is about 108 acres (44 ha) in size with an average depth of 25 feet (7.6 m) and a maximum depth of 58 feet (18 m). No petroleum motors are allowed, and fly fishing is the only form of fishing allowed. It is part of the dePierrefeu Wildlife Sanctuary, which is owned by the New Hampshire Audubon Society. Because the pond and the land around it are part of the sanctuary, the shore is unable to be developed. Therefore, there are no buildings around the pond and there won't be in the foreseeable future. Willard is instead surrounded by extensive amounts of wilderness and hiking trails that lead around the pond and to the summits of Bald Mountain and Goodhue Hill. Willard is a popular fishing, boating and hiking destination, and it has become more popular with its mention in numerous magazines and newspapers.

Wachusett Meadow Wildlife Sanctuary is a 1,135 acres (459 ha) wildlife sanctuary located in Princeton, Massachusetts, owned by the Massachusetts Audubon Society. Charles T. Crocker III donated 600 acres of land along with several buildings to Mass Audubon in 1956. The former farmstead includes a nature center, 12 miles of trails through woodlands, wetlands, and meadows, and a large pond with canoe rentals in season. 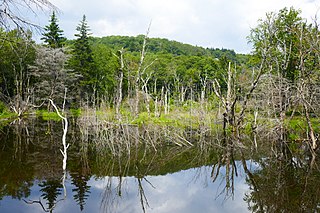 Pleasant Valley Wildlife Sanctuary is a 1,405 acres (569 ha) wildlife sanctuary located in Lenox, Massachusetts owned by the Massachusetts Audubon Society. There are 7 miles of trails and a large pond on Yokun Brook. One trail hikes to the summit of Lenox Mountain.

Stony Brook Wildlife Sanctuary is a wildlife sanctuary in Norfolk, Massachusetts. It is among a network of sanctuaries with the Massachusetts Audubon Society. The 107-acre sanctuary is adjacent to the 140-acre Bristol Blake State Reservation. Both areas are managed by the Department of Conservation and Recreation (DCR). A 1 mile (1.6 km) trail starts around by encircling Stony Pond and ends by a waterfall at the site of a former mill. The trail is wheelchair accessible and includes a 525-foot long boardwalk, installed in 2017, that allows visitors to view birds, wildlife, and the wetland habitat over Teal Marsh and Kingfisher Pond. Wildlife found there includes turtles, ducks, geese, great blue herons, and muskrats. The sanctuary also has natural history exhibits, programming space, a gift shop, nature play area, a picnic area, and a butterfly garden.

Drumlin Farm is a 291 acre farm and wildlife sanctuary which is also the site of the headquarters of the Massachusetts Audubon Society. It is located at 208 South Great Road in Lincoln, Massachusetts.

Oak Knoll Wildlife Sanctuary at 1417 Park Street in Attleboro, Massachusetts is a wildlife sanctuary of the Massachusetts Audubon Society.

Wikimedia Commons has media related to Massachusetts Audubon Society .
This page is based on this Wikipedia article
Text is available under the CC BY-SA 4.0 license; additional terms may apply.
Images, videos and audio are available under their respective licenses.