Seal Rock (or Seal Rocks) is a group of small rock formation islands in the Lands End area of the Outer Richmond District in western San Francisco, California. They are located just offshore in the Pacific Ocean, at the north end of the Ocean Beach, near the Cliff House and Sutro Baths ruins.

The name is derived from the population of Steller's sea lions (Eumetopias jubatus) and California sea lions (Zalophus californianus), who haul out on the rock. Both species are often colloquially called "seals". The formations and wildlife are protected within the Golden Gate National Recreation Area.

Near the end of the last ice age, this part of the coastline was thought to be between eight and twenty five miles westward of its current position - around five thousand years ago, with the melting of the ice, the sea level rose to its current level.

The coastal features found here today were formed by the actions of waves, wind, and the movement of sand. The geology of this part of the coastline of San Francisco consists of steep rocky cliffs which are punctuated by narrow sandy pocket beaches found at the north end of the city and long sandy stretches at Ocean Beach and Fort Funston to the south. The local features, and indeed the entire San Francisco Peninsula, come from the northern aspect of the Santa Cruz Mountains. Before the urban development seen today, the area landward of Ocean Beach consisted of barren sand fields inland to Twin Peaks. The first known map of the area, dating from 1852, was made by the U.S. Coast and Geodetic Survey and describes the coastline here as being entirely unaltered by humans.

The geologic layers beneath Ocean Beach, starting from the top (i.e. the youngest), are:

The Colma and Merced Formations consist generally of poorly-sorted sandy deposits, probably deposited during some earlier period of greater sea levels. The Colma Formation is found under the dune sands and also extends inland. 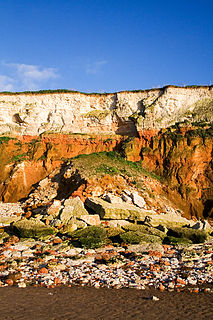 The Sunset District is an neighborhood located in the west-central area of San Francisco, California, United States.

Ocean Beach is a beach on the west coast of San Francisco, California, United States, bordering the Pacific Ocean. It is adjacent to Golden Gate Park, the Richmond District, and the Sunset District. The Great Highway runs alongside the beach, and the Cliff House and the site of the former Sutro Baths sit at the northern end. The beach is a part of the Golden Gate National Recreation Area, which is administered by the National Park Service.

The Cliff House is a neo-classical style building perched on the headland above the cliffs just north of Ocean Beach, in the Outer Richmond neighborhood of San Francisco, California. The building overlooks the site of the Sutro Baths ruins, Seal Rocks, and is part of the Golden Gate National Recreation Area, operated by the National Park Service (NPS). The Cliff House is owned by the NPS; the building's terrace hosts a room-sized camera obscura.

Sutro Heights Park is an historic public park in the Outer Richmond District of western San Francisco, California. It is within the Golden Gate National Recreation Area and the Sutro Historic District. 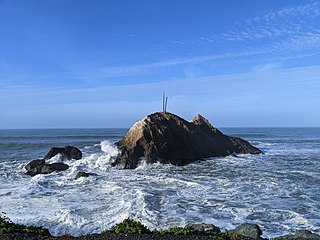 Mussel Rock is a rock formation on the coast of San Mateo County, California, offshore from Daly City. It consists of one large and numerous smaller rocks of a type known as a stack, where a headland is eroded unevenly, leaving small islands. The rock itself is located 15 meters from the shore of Mussel Rock Park and stands 18 meters tall.

The Serra Fault is the northernmost fault in a zone of northwest-striking range front thrust faults adjacent to and northeast of the San Francisco Peninsula segment of the San Andreas Fault, in eastern San Mateo County, California.

Carville, also known Carville-by-the-Sea, was an impromptu neighborhood in the late 19th and early 20th centuries in what is now the Outer Sunset District of San Francisco, California. Residents reused abandoned horsecars and, later, cable cars for housing and public buildings. Carville was located near the intersection of 47th Ave. and Lawton Streets, just south of the western end of Golden Gate Park.

The Camera Obscura is a large-scale camera obscura, in the Lands End area of the Outer Richmond District in western San Francisco, California.

Lands End is a park in San Francisco within the Golden Gate National Recreation Area. It is a rocky and windswept shoreline at the mouth of the Golden Gate, situated between the Sutro District and Lincoln Park and abutting Fort Miley Military Reservation. A memorial to USS San Francisco stands in the park. Numerous hiking trails follow the former railbeds of the Ferries and Cliff House Railway along the cliffs and also down to the shore. 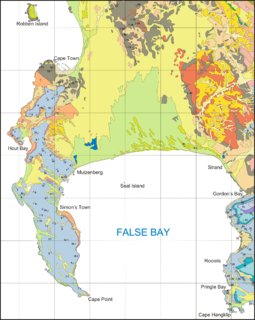 The Merced Formation is a geologic formation in California, and also in Oregon and Washington state. It is named for Lake Merced, a natural lake on the western San Francisco coastline.