Far-left politics, also known as the radical left or the extreme left, are politics further to the left on the left–right political spectrum than the standard political left. The term does not have a single definition. Some scholars consider it to represent the left of social democracy, while others limit it to the left of communist parties. In certain instances, especially in the news media, far-left has been associated with some forms of authoritarianism, anarchism, and communism, or it characterizes groups that advocate for revolutionary socialism, Marxism and related communist ideologies, anti-capitalism or anti-globalization.

Scholars such as Luke March and Cas Mudde propose that socio-economic rights are at the far-left's core. Moreover, March and Mudde argue that the far-left is to the left of the political left with regard to how parties or groups describe economic inequality on the base of existing social and political arrangements. [8] March, a lecturer in Soviet and post-Soviet politics at the University of Edinburgh, defines the far-left as those who position themselves to the left of social democracy, which is seen as either insufficiently left-wing, [9] or as defending the social democratic tradition that is perceived to have been lost. [10]

The two main sub-types of far-left politics are called "the radical left" and "the extreme left"; the first desires fundamental changes in neoliberal capitalism and progressive reform of democracy such as direct democracy and the inclusion of marginalized communities, [11] while the latter denounces liberal democracy as a "compromise with bourgeois political forces" and defines capitalism more strictly. [8] Far-left politics is seen as radical politics because it calls for fundamental change to the capitalist socio-economic structure of society. [12]

March and Mudde say that far-left parties are an increasingly stabilized political actor and are challenging mainstream social democratic parties, defining other core characteristics of far-left politics as being internationalism and a focus on networking and solidarity as well as opposition to globalization and neoliberalism. [12] In his later conceptualization, March started to refer to far-left politics as "radical left politics", which is constituted of radical left parties that reject the socio-economic structures of contemporary society that are based on the principles and values of capitalism. [13]

Other scholars classify the far-left under the category of populist socialist parties. [19] Vít Hloušek and Lubomír Kopeček of the Masaryk University at the International Institute of Political Science suggest secondary characteristics, including anti-Americanism, anti-globalization, opposition to NATO, and in some cases a rejection of European integration. [18]

March states that "compared with the international communist movement 30 years ago, the far left has undergone a process of profound de-radicalization. The extreme left is marginal in most places." March identifies four major subgroups within contemporary European far-left politics, namely communists, democratic socialists, populist socialists, and social populists. [20] In a later conception of far-left politics, March writes: "I prefer the term 'radical left' to alternatives such as 'hard left' and 'far left', which can appear pejorative and imply that the left is necessarily marginal." According to March, the most successful far-left parties are pragmatic and non-ideological. [21]

According to political scientist Paolo Chiocchetti, radical left parties have failed to concretise an alternative to neoliberalism and lead a paradigm shift towards a different path of development model, despite electoral gains in the 2010s; [22] when they were in government, such parties were forced to put aside their strong anti-neoliberalism and accept neoliberal policies, either proposed by their larger allies or imposed due to the international context. [23] This view is also shared by Mudde [24] and political scientist Yiannos Katsourides in regards to SYRIZA. [25]

Historian Gary Gerstle writes that, in the neoliberal era, with the collapse of communism, the globalization of capitalism and, in the Western world particularly, the end of any imperative for compromise between the capitalist class and the workers, the hard left has been rendered largely powerless and no longer feared by ruling elites. [26]

Left-wing politics describes the range of political ideologies that support and seek to achieve social equality and egalitarianism, often in opposition to social hierarchy. Left-wing politics typically involve a concern for those in society whom its adherents perceive as disadvantaged relative to others as well as a belief that there are unjustified inequalities that need to be reduced or abolished. Left-wing politics are also associated with popular or state control of major political and economic institutions. According to emeritus professor of economics Barry Clark, left-wing supporters "claim that human development flourishes when individuals engage in cooperative, mutually respectful relations that can thrive only when excessive differences in status, power, and wealth are eliminated."

Socialism is a left-wing economic philosophy and movement encompassing a range of economic systems characterized by the dominance of social ownership of the means of production as opposed to private ownership. As a term, it describes the economic, political and social theories and movements associated with the implementation of such systems. Social ownership can be state/public, community, collective, cooperative, or employee. While no single definition encapsulates the many types of socialism, social ownership is the one common element. Different types of socialism vary based on the role of markets and planning in resource allocation, on the structure of management in organizations, and from below or from above approaches, with some socialists favouring a party, state, or technocratic-driven approach. Socialists disagree on whether government, particularly existing government, is the correct vehicle for change.

Right-wing politics describes the range of political ideologies that view certain social orders and hierarchies as inevitable, natural, normal, or desirable, typically supporting this position on the basis of natural law, economics, authority, property or tradition. Hierarchy and inequality may be seen as natural results of traditional social differences or competition in market economies.

Neoliberalism is a term used to signify the late 20th century political reappearance of 19th-century ideas associated with free-market capitalism after it fell into decline following the Second World War. A prominent factor in the rise of conservative and libertarian organizations, political parties, and think tanks, and predominantly advocated by them, it is generally associated with policies of economic liberalization, including privatization, deregulation, globalization, free trade, monetarism, austerity, and reductions in government spending in order to increase the role of the private sector in the economy and society. The defining features of neoliberalism in both thought and practice have been the subject of substantial scholarly debate. 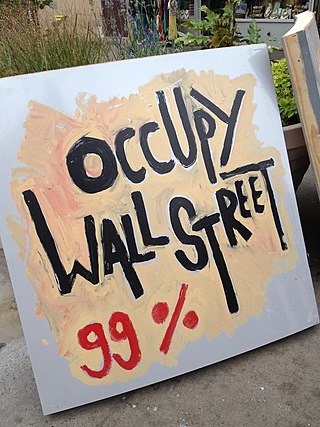 Populism refers to a range of political stances that emphasize the idea of "the people" and often juxtapose this group against "the elite". It is frequently associated with anti-establishment and anti-political sentiment. The term developed in the late 19th century and has been applied to various politicians, parties and movements since that time, often as a pejorative. Within political science and other social sciences, several different definitions of populism have been employed, with some scholars proposing that the term be rejected altogether.

Far-right politics, also referred to as the extreme right or right-wing extremism, are politics further on the right of the left–right political spectrum than the standard political right, particularly in terms of being radically conservative, ultra-nationalist, and authoritarian, as well as having nativist ideologies and tendencies.

The Third Way is a centrist political position that attempts to reconcile right-wing and left-wing politics by advocating a varying synthesis of centre-right economic policies with centre-left social policies. The Third Way was born from a re-evaluation of political policies within various centre to centre-left progressive movements in the 1980s in response to doubt regarding the economic viability of the state and the perceived overuse of economic interventionist policies that had previously been popularised by Keynesianism, but which at that time contrasted with the rise of popularity for neoliberalism and the New Right starting in the late 1970s and throughout the 1980s.

Red-baiting, also known as reductio ad Stalinum and red-tagging, is an intention to discredit the validity of a political opponent and the opponent's logical argument by accusing, denouncing, attacking, or persecuting the target individual or group as anarchist, communist, Marxist, socialist, Stalinist, or fellow travelers towards these ideologies. In the phrase, red refers to the color that traditionally symbolized left-wing politics worldwide since the 19th century, while baiting refers to persecution, torment, or harassment, as in baiting.

The Third Position is a set of neo-fascist political ideologies that were first described in Western Europe following the Second World War. Developed in the context of the Cold War, it developed its name through the claim that it represented a third position between the capitalism of the Western Bloc and the communism of the Eastern Bloc. 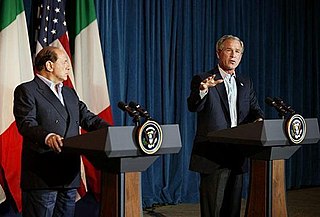 Communism is a far-left sociopolitical, philosophical, and economic ideology and current within the socialist movement whose goal is the establishment of a communist society, a socioeconomic order centered around common ownership of the means of production, distribution, and exchange which allocates products to everyone in the society. Communist society also involves the absence of private property, social classes, money, and the state. Communists often seek a voluntary state of self-governance, but disagree on the means to this end. This reflects a distinction between a more libertarian approach of communization, revolutionary spontaneity, and workers' self-management, and a more vanguardist or communist party-driven approach through the development of a constitutional socialist state followed by the withering away of the state. 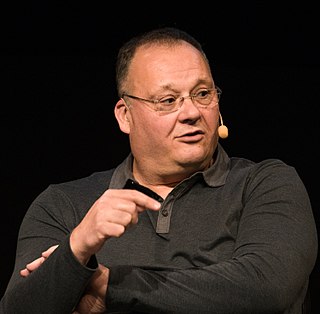 Cas Mudde is a Dutch political scientist who focuses on political extremism and populism in Europe and the United States. His research includes the areas of political parties, extremism, democracy, civil society and European politics.

Social democracy is a political, social, and economic philosophy within socialism that supports political and economic democracy. As a policy regime, it is described by academics as advocating economic and social interventions to promote social justice within the framework of a liberal-democratic polity and a capitalist-oriented mixed economy. The protocols and norms used to accomplish this involve a commitment to representative and participatory democracy, measures for income redistribution, regulation of the economy in the general interest, and social welfare provisions. Due to longstanding governance by social democratic parties during the post-war consensus and their influence on socioeconomic policy in Northern and Western Europe, social democracy became associated with Keynesianism, the Nordic model, the social-liberal paradigm, and welfare states within political circles in the late 20th century. It has been described as the most common form of Western or modern socialism, as well as the reformist wing of democratic socialism.

Left-wing populism, also called social populism, is a political ideology that combines left-wing politics with populist rhetoric and themes. Its rhetoric often consists of anti-elitism, opposition to the Establishment, and speaking for the "common people". Recurring themes for left-wing populists include economic democracy, social justice, and scepticism of globalization. Socialist theory plays a lesser role than in traditional left-wing ideologies.

In political science, the terms radical right and populist right have been used to refer to the range of European nationalist, far-right parties that have grown in support since the late 1970s. Populist right groups have shared a number of causes, which typically include opposition to globalisation and immigration, criticism of multiculturalism, and opposition to the European Union.