Kandahar or Qandahar is a city located in Afghanistan, with a population of about 614,118. Kandahar is located in the south of the country on the Arghandab River, at an elevation of 1,010 m (3,310 ft). It is the capital of Kandahar Province, and also the center of the larger cultural region called Loy Kandahar. In 1709, Mirwais Hotak made the region an independent kingdom and turned Kandahar into the capital of the Hotak dynasty. In 1747, Ahmad Shah Durrani, founder of the Durrani dynasty, made Kandahar the capital of the Afghan Empire. 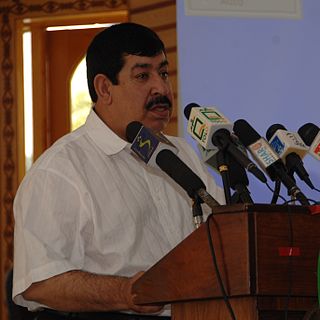 Gul Agha Sherzai, also known as Mohammad Shafiq, is a politician in Afghanistan. He is the former governor of Nangarhar province in eastern Afghanistan. He previously served as Governor of Kandahar province, in the early 1990s and from 2001 until 2003. As of October 2013, Sherzai resigned from his post as governor and formally announced himself as a candidate for Afghanistan's 2014 Presidential Election. He is presently the minister of border and tribal affairs.

Kandahār is one of the thirty-four provinces of Afghanistan, located in the southern part of the country next to Pakistan. It is surrounded by Helmand in the west, Uruzgan in the north and Zabul Province in the east. Its capital is the city of Kandahar, which is located on the Arghandab River. The greater region surrounding the province is called Loy Kandahar.

Maruf District is a district in Kandahar Province, Afghanistan. It borders Arghistan District to the west, Zabul Province to the north and Pakistan to the east and south. The population is 200000 (2006). The district center is the town of Maruf district, located in the northern part of the district. It is a boundary mountainous district with a lot of rugged mountain passes towards Pakistan. It is located almost 190 km far from any provincial city. This district has 360 villages. It has very agricultural land.

Achakzai, pronounced in Pashto, is a Pashtun tribe that resides on both sides of the Durand Line, centered on Killa Abdullah District in Pakistan with some clans as far away as Afghanistan’s Kandahar Province.

Fareedi or Faridi, is a clan of the Farooqi tribe named after Farīduddīn Mas'ūd Ganjshakar, a murid of a sheikh who belongs to the sufi order of Baba Fareed Shaker Gunj.

Mīrwais Khān Hotak, also known as Shāh Mirwais Ghiljī, was an influential tribal chief of the Ghilji Pashtuns from Kandahar, Afghanistan, who founded the Hotak dynasty that existed from 1709 to 1738. After revolting and killing the Safavid Persian governor over the region, Gurgin Khan in April 1709, he declared the Loy Kandahar region in what is now southern Afghanistan independent. He is widely known as Mīrwais Nīkə or Mīrwais Bābā in the Pashto language.

Luni is one of the largest branch of Durrani tribe of Pashtuns mainly living in Pakistan including in the town of Luni and Loralai districts of Balochistan province of Pakistan. Some of Luni families are also living in Quetta and other areas of Balochistan, Pakistan. Luni tribe use 'Sardar' title at the beginning of their names. to refer to their putative part-descent from the Sadozai clan of King Ahmad Shah Durrani.

Mohammad Arif Noorzai was a former minister of Border and Tribe Affairs for Afghanistan. He was elected to represent Kandahar Province in Afghanistan's Wolesi Jirga, the lower house of its National Legislature, in 2005. He is the first deputy speaker of Afghanistan Wolesi Jirga and his current position is the Advisor of President Hamid Karzai for security and tribal affairs He is a member of the Pashtun ethnic group, and the Noorzai tribe. A report on Kandahar prepared at the Navy Postgraduate School stated he is first deputy speaker, and that he is related to President Hamid Karzai through marriage, and that he is a high school graduate.

Barech is a Pashtun tribe in southern Kandahar province of Afghanistan. The Barech live primarily in Shorawak District.

Tokhi is a Ghilji Pashtun tribe found throughout southern, eastern, southeastern and northeastern Afghanistan. Historically they have mostly lived in what is now Zabul Province, Helmand and Kandahar in Afghanistan.

Lōy Kandahār is a historical and cultural region of Afghanistan, comprising the modern Afghanistan provinces of Kandahar, Helmand, Farah, Urozgan, and Zabul, as well as parts of Nimruz, and the Pashtun majority northern part of Balochistan Province, Pakistan. In 1709, Mirwais Hotak made the region an independent kingdom and turned Kandahar city into the capital of the Hotak dynasty. In 1747, Ahmad Shah Durrani, founder of the Durrani dynasty, made Kandahar the capital of the Afghan Empire.