The Muqbil is a Pashtun tribe, cousins of the Zadrans and Mangals. They now reside in Sayid Karam District in Paktia. They can be further divided into five clans: Musa Khel, Sultak, Ahmad Khel, Hasan Khel, and the Bobaki. Little else is known. [1]

Said Karam is a district in Paktia Province, Afghanistan. The main town in Khandkhel. 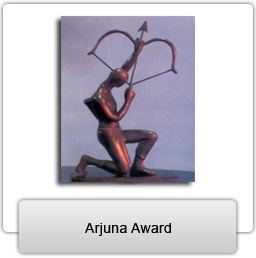 The Arjuna Awards are given by the Ministry of Youth Affairs and Sports, Government of India to recognize outstanding achievement in sports. Started in 1961, the award carries a cash prize of ₹ 5,00,000, a bronze statue of Arjuna and a scroll.

The Tarkani or Tarkalani is a Pashtun tribe mainly settled in Bajaur Agency, Lower Dir district of Pakistan, and in Kunar province of Afghanistan but originally hailed from the Laghman province of modern-day Afghanistan.

The Rajiv Gandhi Khel Ratna, officially known as Rajiv Gandhi Khel Ratna Award in Sports and Games, is the highest sporting honour of the Republic of India. The award is named after Rajiv Gandhi, former Prime Minister of India who served the office from 1984 to 1989. It is awarded annually by the Ministry of Youth Affairs and Sports. The recipient(s) is/are selected by a committee constituted by the Ministry and is honoured for their "spectacular and most outstanding performance in the field of sports over a period of four years" at international level. As of 2018, the award comprises a medallion, a certificate, and a cash prize of ₹7.5 lakh (US$10,000).

The Musa Khel, or Moosa Khel, is a Pashtun tribe of Gharghasht origin. According to Horace Arthur Rose and the 1911 Encyclopædia Britannica, they are part of the greater Kakar tribe. The tribe originates from Ghazni province in Afghanistan and resides in the tribal range of Musakhel and Batagram District in the Khyber-Pakhtunkhwa province of Pakistan and Afghanistan. Moosa Khel has the lowest literacy rate in Pakistan—10.37%—and is also a sub-tribe to Babozai, which is part of the major Pashtun tribe.

Khaglan Wala (ڪھگلانواله) is a village and union council of Isakhel Tehsil of Mianwali District in the Punjab province of Pakistan. It is part of Isa Khel Tehsil and is located at 32°37'60N 71°16'0E.It is located on the northern bank of Kurram River. It is one of the villages situated on the western borders of Punjab province adjacent to KPK province. Its population is about 3000 people. It is a comparatively developed village as basic facilities like electricity, telephone, metallic road, internet, schools, water supply system and sewerage system are provided to the inhabitants of this village. It is also a well-planned village situated on a 40 feet wide road. A 30' main street runs east to west through the village by equally dividing the entire village into two parts. Three other streets run north to south crossing the main street at 90°. There are four mosques including a grand mosque situated in this settlement. The scene of river Kurram alongside bela jungle give beautiful look to this historical village. Khaglanwala is a hub of different routs coming from various villages situated on other side of the River Kurram to reach Isa Khel city.

Ismail Khel also rendered as Ismael Khel, Ismaeel Khel and Ishmael Khel is a Pakhtun tribe in Pakistan and Afghanistan. Ismail Khel is settled and resides in Bannu; a historic district in the KhyberPakhtunkhwa ; Province Punjab; District Attock; area Chhachh, and Khost Province of Afghanistan.

The Utmankhel or Utman Khel, are a Yusufzai Pashtun tribe living in Pakistan, with considerable numbers in Afghanistan. The Utman Khel mostly live in the Bajaur District, Malakand District and Lower Dir. They lie between the Mohmands and the Ranizais of Swat, to the west and south-west of the junction of the Swat and Panjkora rivers. They claim to be descendants of Baba Utman Shamraiz, who also assisted Mahmud of Ghaznavi in his expedition into India in 997. The Utman Khel are a tall, stout and fair race, but their dress and general customs have been assimilated by the neighbouring peoples of Bajaur.

Alikhail or Alikhail is a Pakhtun tribe in Pakistan India and Afghanistan. Alikhail belongs to the Ghilji tribe of the Bettani confederation of Pashtuns. It is considered a "brother tribe" of the Sulemankhel and Tanoli tribes. Alikhail's are the descendants of Bibi Mato.

The Mandanr, Mandar, or Mandan are a Pashtun tribe, the children of Mand who was one of the sons of Umer, making it a sub tribe of Yousafzai. Mandanr had four sons.1- Mano, 2-Razar, 3-Khizar and 4-Mehmood.

Mamozai is a Pashtun tribe of Orakzai Agency along the Afghanistan and Pakistan border. Like many Afghans or Pashtuns, Orakzai are split along both sides of the border. It consists of a large area including places such as Sama Bazaar, Kach Gari, Jaba, Matrak, Gutta Khel, Kalaya, Khawano,karim nawasi, arghenja bazzar, kama darra, ghatta darra, Krapa and Darrah. The Mamuzai have five subtribes. A number of Mamozai also live in Kohat, Peshawar, and other parts of Khyber Pakhtunkhwa; those living in urban areas tend to be more educated but otherwise share most of the cultural norms of the Mamozai. This tribe is one of the most gallant tribes of fata.

The Jani Khel offensive was launched by the Taliban and the Haqqani network in early August 2016 to conquer the Jani Khel District within the contested Paktia Province from government forces. Due to the district's geographic location, it is of great strategic and tactical value to any force that controls it. After being besieged by insurgents for weeks and not receiving any outside help, the local government forces retreated from the district on 27 August. Even though the district was retaken by the government on 5 September, the fact that the district had been captured by the Taliban in the first place was widely considered a heavy blow for the government, which faced increasing insecurity and loss of territory since the ISAF retreat in 2014.

The Painda Khel is a clan of the Swati origin which inhabits lands in Bajna and Mansehra and north of Mansehra District in Pakistan. In the 19th century they fought battles against the British with the Hazara Expedition of 1888.