Tokhi (Pashto: توخی) is a Ghilji Pashtun tribe found throughout southern, eastern, southeastern and northeastern Afghanistan. Historically they have mostly lived in what is now Zabul Province, Helmand and Kandahar in Afghanistan.[ citation needed ]

The Pashtuns, historically known as ethnic Afghans and Pathans, are an Indo-Iranian ethnic group native to South-Central Asia, who share a common history and culture. A substantial majority of ethnic Pashtuns shares Pashto as the native language.

Afghanistan, officially the Islamic Republic of Afghanistan, is a landlocked country located in South-Central Asia. Afghanistan is bordered by Pakistan in the south and east; Iran in the west; Turkmenistan, Uzbekistan, and Tajikistan in the north; and in the far northeast, China. Its territory covers 652,000 square kilometers (252,000 sq mi) and much of it is covered by the Hindu Kush mountain range. Kabul serves as the capital and its largest city.

Khūshāl Khān Khaṭṭak (1613 – 25 February 1689; Pashto: خوشال خان خټک‎), also called Khushal Baba, was an Afghan and Pashtun warrior-poet, chief, and freedom-fighter of the Khattak tribe of the Pashtuns. Khushal preached the union of all Pashtuns, and encouraged revolt against the Mughal Empire, promoting Pashtun nationalism through poetry. Khushal was the first Afghan mentor who presents his theories for the unity of the Pashtun tribes against foreign forces and the creation of a nation-state. Khushal wrote many works in Pashto but also a few in Persian. Khushal is considered the "father of Pashto literature" and the national poet of Afghanistan.

Popalzai or Popalzay, also known as Popal, are Durrani Pashtuns of Afghanistan. Small number of Popalzais also live in Pakistan, particularly in the city of Quetta and in Karachi. 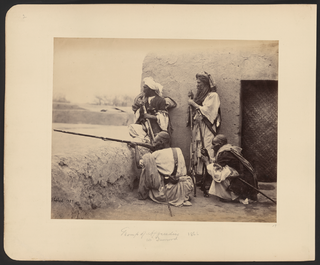 The Afrīdī is a Pashtun tribe present in Pakistan, with substantial numbers in Afghanistan. The Afridis are most dominant in Pakistan's Federally Administered Tribal Areas, inhabiting about 100p mi² (8000 km²) of rough hilly area in the Zarlash eastern Spin Ghar range west of Peshawar, covering most of Khyber Agency, FR Peshawar and FR Kohat. Their territory includes the Khyber Pass and Maidan in Tirah. Afridi migrants are also found in India, mostly in the states of Uttar Pradesh, Bihar and Jammu and Kashmir.

Durrani or Sadozai is a Sarbani Pashtun tribal confederation in Afghanistan and Pakistan. They have been called Durrani since the beginning of the Durrani Empire in 1747. Durrani are found throughout Afghanistan and Pakistan; although large concentrations are found in southern Afghanistan, they are also found to a lesser extent in east, west and central Afghanistan. Many Durranis are found in Khyber Pakhtunkhwa and Punjab provinces of Pakistan. The Durrani Pashtuns of the Afghan capital Kabul are usually bilingual in Pashto and Dari Persian. The ruling Sadduzai and Barakzai dynasties of Afghanistan were from the Durrani.

Saṛbanī or Sarban Confedracy is a tribal group of Pashtuns. They are situated in Pakistan and Afghanistan. The Sarbani include many Pashtun tribes, including the Sherani, the Tareen, the Urmer, Durranis, Khalils, Mohmands, Daudzai, Chamkanis, Yousafzai, Shinwari and Tarkalani. According to the Pashtun legend of origins, the members of the Sarbani group all descend from Sarban, said to be the first son of the legendary founding father of the Pashtun people, Qais Abdur Rashid.

Achakzai, pronounced in Pashto, is a Pashtun tribe that resides on both sides of current Pakistan Afghanistan border, centered on Killa Abdullah District with some clans as far away as Afghanistan’s Kandahar Province.

Pashtun culture is based on Pashtunwali, which is an ancient way of life, as well as speaking of the Pashto language and wearing Pashtun dress. The culture of the Pashtun people is highlighted since at least the time of Herodotus or Alexander the Great, when he explored the Afghanistan and Pakistan region in 330 BC. The Pashtun culture has little outside influence, and, over the ages, has retained a great degree of purity.

Pashtun diaspora refers to ethnic Pashtuns who live outside their traditional homeland of Pashtunistan, which is south of the Amu River in Afghanistan and west of the Indus River in Pakistan. Pashtunistan is home to the majority of the Pashtun community. However, there are significant Pashtun diaspora communities in the Sindh and Punjab provinces of Pakistan, in particular in the cities of Karachi and Lahore, and in the Uttar Pradesh state of India, in particular in the region of Rohilkhand. A recent Pashtun diaspora has also developed in the Arab states of the Persian Gulf, primarily in the United Arab Emirates. Smaller populations of Pashtuns are found in the European Union, North America, Australia and other parts of the world. They may also be found in Iran, Oman, Saudi Arabia, Kuwait, Qatar and Bahrain.

Tarinkot District, also spelled as Tarin Kowt, is a district of Urozgan Province, Afghanistan. The capital of the district and the province is the town called Tarinkot.

Atghar District is a district of Zabul Province in southern Afghanistan. It had a population of about 8,400 in 2013. It is within the heartland of the Tokhi tribe of Ghilji Pashtuns.

Pashtunization, also called Pathanization, is a process of cultural or linguistic change in which someone or something non-Pashtun becomes accultured to Pashtun influence. The Pashtun people are the largest ethnic group in Afghanistan and the second largest in Pakistan.

Nāzo Tokhī, commonly known as Nāzo Anā, was an Afghan female poet and a literary figure of the Pashto language. Mother of the famous early-18th century Afghan King Mirwais Hotak, she grew up in an influential family in the Kandahar region. Nazo Tokhi is remembered as a brave woman warrior in the history of Afghanistan, who eventually became the legendary "Mother of Afghan Nation".

The Hotak or Hotaki (هوتکي) is a tribe of the Ghilji confederacy of the Pashtun people. The Hotak started centuries ago as a political family. The first king to take power in Kandahar, Afghanistan, was Mirwais Hotak (1673–1715). After his death many different Hotaks took the throne, such as Mahmud Hotak, Ashraf Hotak, and Hussain Hotak, eventually losing control.

Shāh Abdul Azīz Hotak was the second ruler of the Ghilji Hotak dynasty of Kandahar, in what is now the modern state of Afghanistan. He was crowned in 1715 after the death of his brother, Mirwais Hotak. He is the father of Ashraf Hotak, the fourth ruler of the Hotak dynasty. Abdul Aziz was killed in 1717 by his nephew Mahmud Hotak.

Nazo Ana high schools are girls' schools in Afghanistan. One is in "Mikrorayan-e-Awal" in District 9 of Kabul City, Afghanistan, and the other is in Kandahar City.

The term "Balailzai (Palari)" refers to a Pashtun tribe in Afghanistan and Pakistan. Another name for the tribe of Palari is Balailzai. Like other Pashtuns, they have Eastern Iranian genetic and ethnolinguistic heritage. They descended from Gharghasht, one of Qais Abdur Rashīd's sons. Most are settled in parts of Pakistan or Afghanistan, such as Karachi, Quetta, Musakhail, Dera Ismail Khan, Mardan, Peshawar, Panni, Haripur, Kabul, Tank, Kohat, while there are some communities in the United States, United Kingdom, and other Western countries. They were, at one point in time, were holding main posts in the Government especially during the rule of Bahlol Lodhi. After his reign ended, they scattered and migrated to various parts of the Indian subcontinent and the Middle East. Panni are migrated to South India. Palari are Nawab of Kurnool and Nawab of the Carnatic which rule in Mughal Empire. Most of the Panni's are settled in Pakistan.