Nattuzai are part of the Gandapur tribe. Most of them live in Kulachi city but are scattered in the city and there is no Mohallah (Sector) after their name. [ citation needed ]

Kulachi is a city named after the Kulachi Baloch tribe and is the headquarters of Kulachi Tehsil of Dera Ismail Khan District in Khyber-Pakhtunkhwa province of Pakistan. It is located at 31°55′49″N70°27′31″E at an altitude of 209 metres (688 feet).

An interesting anecdote about their origin quite popular in the Kulachi city is that they are not part of the original tribe of Gandapur and are rather the descendant of a Hindu Nathu Ram (Nattu being the local Pashto variant of Nathu). Nathu (or Nattu) Ram later embraced Islam and was so close with the Gandapur tribe that the elders of Gandapur tribe allocated him and his family share in the lands of Kulachi. The veracity of this claim cannot be verified and further research is required in this regard. [ citation needed ]

Islam is an Abrahamic monotheistic religion teaching that there is only one God, and that Muhammad is the messenger of God. It is the world's second-largest religion with over 1.8 billion followers or 24% of the world's population, most commonly known as Muslims. Muslims make up a majority of the population in 50 countries. Islam teaches that God is merciful, all-powerful, and unique, and has guided humankind through prophets, revealed scriptures and natural signs. The primary scriptures of Islam are the Quran, viewed by Muslims as the verbatim word of God, and the teachings and normative examples of Muhammad.

They are now part and parcel of the Gandapur tribe.

The Kakar is a Gharghashti Pashtun tribe, based mostly in the Balochistan Province of Pakistan, and Loy Kandahar in Afghanistan. They originate from the Ghazni province.

Nathuram Mirdha (1921–1996) was a parliamentarian, freedom fighter, social reformer and popular farmer leader of Marwar region in Rajasthan, India. He was born in Kuchera, Nagaur district, Rajasthan on 20 October 1921. His father's name was Thana Ram Mirdha.

Bāyazīd Pīr Rōshān or Pīr Rōkhān ‎ was a Pashtun warrior, poet,Sufi, a freedom fighter and revolutionary leader from Kaniguram, Waziristan. He wrote mostly in Pashto, but also in Persian, Hindustani, and Arabic, while he also spoke Ormuri. He is known for founding the Roshani movement, which gained many followers in the Pashtunistan region and produced numerous Pashto poets and writers. Pir Roshan created a Pashto alphabet, derived from the Arabic script with 13 new letters. A modified version of this alphabet continues to be used to write Pashto. Pir Roshan wrote Khayr al-Bayān, one of the earliest known books containing Pashto prose. 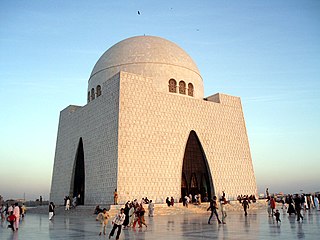 Debal was an ancient port located near modern Karachi, Pakistan. It is adjacent to the nearby Manora Island and was administered by Mansura, and later Thatta.

Krokola was an ancient port located in what is now the modern city of Karachi, in the Sindh province of Pakistan.

Tamas is a 1988 period television film written and directed by Govind Nihalani. It is based on the Hindi novel of the same name by Bhisham Sahni (1974), which won the author the Sahitya Akademi Award in 1975. Set in the backdrop of riot-stricken Pakistan at the time of Partition of Punjab in 1947, the film deals with the plight of emigrant Sikh and Hindu families to India as a consequence of the partition. It was first shown on India's national broadcaster Doordarshan as a mini-series and later as a one-off four-hour-long feature film. At the 35th National Film Awards, it won three awards including the Nargis Dutt Award for Best Feature Film on National Integration. In August 2013, it was shown on History TV18 as a series.

Yaqubzai are a Pashtun tribe of Gandapur living in Afghanistan and Pakistan.

Shahdara, is a geographical region in the city of Delhi, India, situated near the banks of Yamuna river. It is one of the oldest inhabited areas of Delhi and integral to what is known as Purani Dilli . Shahdara is one of the new district of Delhi and has collectorate office at Dilshad Garden near Gagan Cinema. Delhi Metro started its operation from Shahdara only. Shahdara is the premier metro station of the DMRC and first station on Red Line.

The Nathu La and Cho La clashes were a series of military clashes between India and China alongside the border of the Himalayan Kingdom of Sikkim, then an Indian protectorate.

Jat Mahasabha or All India Jat Mahasabha is an organization of Jats in India. Its aim is to raise awareness about the social and economic problems faced by Jats. The Jat Mahasabha spearheaded the community's struggle for reservation in the run-up to the Lok Sabha elections in 1999. Chaudhary Dara Singh was the president. After paying rich tribute to the departed soul, the member of the mahasabha nominated the prominent patron Ch Ajay Singh. The Mahasabha became a forum for demanding employment and airing Jat grievances over their poor representation in government service. . (Rongha jatt .. A great Muslim jatt tribe..migrated from East punjab after1857's war of Independence ..and settled in different areas of Western& southren Punjab and some areas of Sindh also.. basically they were landlords. But now a day's they are educated and are serving as government officials in different departments of Pakistan. specially khanewal city of Punjab.

Kosli is a town and "tehsil" in the Rewari district of Haryana in India. It comes in Ahirwal. It is situated 80 kilometers South-West from Delhi. Kosli Tehsil is part of National Capital Region.

Maddi is a town and union council of Kulachi Tehsil, Dera Ismail Khan District of Khyber-Pakhtunkhwa. It is located at 31°52'59N 70°34'27E and has an altitude of 198 metres. It is an important town of Gandapur tribe. It is inhabited by Ibrahimzais, Pattikhels, Ranazais and other Seraiki people.

Hafiz Khel is a sub-tribe of Gandapur tribe. About 80-85% are now migrated to Dera Ismail Khan and Tank Districts of Khyber Pakhtunkhwa Province and Zhob province of Baluchistan. 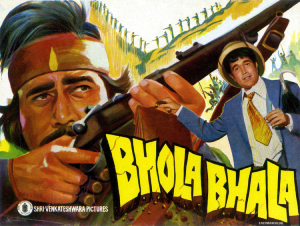 Bhola Bhala is a 1978 Bollywood action film, directed by Satpal and produced by V. Gopi Krishna. The film stars Rajesh Khanna in a double role and was paired opposite Rekha and Moushumi Chatterjee. The film revolves around the innocent insurance agent Ram Kumar Verma, who falls into trap of the bandit Nathu Singh, who in turn wants Ram to endorse a Life Insurance Policy in name of Nathu Singh, so that Nathu can fake a death claim and get the amount from LIC company. The film was commercial hit upon its release. The musical instrument kalimba was played by Homi Mullan for "Jhuk Gayi Aankhen".