Barozai is a clan of Balailzai, a Pashtun tribe in Afghanistan and Pakistan. [1] Panni are also known as Balailzai. The Panni are descended from Gharghasht, one of Qais Abdur Rashid sons. Originated from present Pakistan-Afghanistan border and then mostly resettled in Karachi, Quetta, Zhob, Sibi, Musakhail, Dera Ismail Khan, Mardan, Peshawar, Kabul, Tank, Kohat. [2]

Afghanistan, officially the Islamic Republic of Afghanistan, is a landlocked country located in South-Central Asia. Afghanistan is bordered by Pakistan in the south and east; Iran in the west; Turkmenistan, Uzbekistan, and Tajikistan in the north; and in the far northeast, China. Its territory covers 652,000 square kilometers (252,000 sq mi) and much of it is covered by the Hindu Kush mountain range. Kabul serves as the capital and its largest city.

Pakistan, officially the Islamic Republic of Pakistan, is a country in South Asia. It is the world’s sixth-most populous country with a population exceeding 212,742,631 people. In area, it is the 33rd-largest country, spanning 881,913 square kilometres. Pakistan has a 1,046-kilometre (650-mile) coastline along the Arabian Sea and Gulf of Oman in the south and is bordered by India to the east, Afghanistan to the west, Iran to the southwest, and China in the northeast. It is separated narrowly from Tajikistan by Afghanistan's Wakhan Corridor in the northwest, and also shares a maritime border with Oman.

Karachi is the capital of the Pakistani province of Sindh. It is the most populous city in Pakistan, and sixth-most-populous city proper in the world. Ranked as a beta-global city, the city is Pakistan's premier industrial and financial centre and is considered as the cultural, economic, philanthropic, educational, and political hub of the country. Karachi is also Pakistan's most cosmopolitan city. Situated on the Arabian Sea, Karachi serves as a transport hub, and is home to Pakistan's two largest seaports, the Port of Karachi and Port Bin Qasim, as well as Pakistan's busiest airport, Jinnah International Airport.

The Afghan which Malik Jiwan (Junnaid Khan Panni Barozai) lay under obligations to the prince. A town which is notoriously the hottest inhabited place Dara wished to rest from the fatigues of the journey entered the territory of Dhadar in 11 June 1659 A.D.) The Barozais were often appointed as Governors of Sibi by the Mughal Emperors and they enjoyed the title of Nawab and also carried out administration of Sibi on the behalf of Afghan Rulers. The Sanads given by Ahmad Shah Durrani to Ismail Khan Panni Barozai and Muhammad Khan Panni Barozai in the 19th Zilhaj 1166 A.H. (1753 A.D.). The Afghan King Timur Shah Durrani also given Sanads to Ahmadyar khan Panni, Mahmood khan and muhammad Rahim khan Pannis in 8th Muharram 1201 A.H. ( 1781) In the British Raj influence started extending to Sibi region in 1839 Misri Khan Barozai the head of Panri tribe tendered his services to Shah Shujah Durrani and was taken into British services with the number of his followers

Dhadar, also spelt Dadhar, is the capital of the Kachhi District in the [sindh (Pakistan)|sindh]] province of Pakistan. The town which also consists of one Union Council is the headquarters of the tehsil of the same name. It is located at 29°28'0"N 67°39'0"E and has an altitude of 132 metres (436 feet). 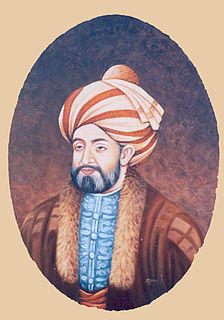 Ahmad Shāh Durrānī, also known as Ahmad Khān Abdālī, was the founder of the Durrani Empire and is regarded as the founder of the modern state of Afghanistan. He began his career by enlisting as a young soldier in the military of the Afsharid kingdom and quickly rose to become a commander of the Abdali Regiment, a cavalry of four thousand Abdali Pashtun soldiers.

The Tareen is a tribe of Western Pashtun who inhabit southern Afghanistan, the Balochistan province of Pakistan and Hazara region of northwestern Pakistan.

Derajat, the plural of the word 'dera', is a cultural region of central Pakistan, located in the region where the provinces of Khyber Pakhtunkhwa, Punjab, and Balochistan meet. Derajat is bound by the Indus River to the east and the Sulaiman Mountains to the west. The region consists of the districts Dera Ismail Khan, founded by Ismail Khan Dodai, Dera Ghazi Khan, founded by Ghazi Khan Mirrani, as well as two smaller districts, Rajanpur and Tank, which were separated from Dera Ghazi Khan and Dera Ismail Khan, respectively. The Baloch districts of Dera Bugti and Jafarabad are adjacent to Derajat towards the southwest. The people of Derajat are called Derawal, and the varieties of Saraiki they speak are collectively called Derawali dialect. Pashto and Balochi are spoken in the northern and western parts of Derajat.

Rohillas are a community of Pashtun ethnicity, historically found in Rohilkhand, a region in the state of Uttar Pradesh, North India. It forms the largest Pashtun diaspora community in India, and has given its name to the Rohilkhand region. Historically, the terms Pashtun and Afghan were synonymous, but the present-day Indian constitution does not recognise Pathan as being synonymous with Afghan.

Durrani or Sadozai is a Sarbani Pashtun tribal confederation in Afghanistan and Pakistan. They have been called Durrani since the beginning of the Durrani Empire in 1747. Durrani are found throughout Afghanistan and Pakistan; although large concentrations are found in southern Afghanistan, they are also found to a lesser extent in east, west and central Afghanistan. Many Durranis are found in Khyber Pakhtunkhwa and Punjab provinces of Pakistan. The Durrani Pashtuns of the Afghan capital Kabul are usually bilingual in Pashto and Dari Persian. The ruling Sadduzai and Barakzai dynasties of Afghanistan were from the Durrani. 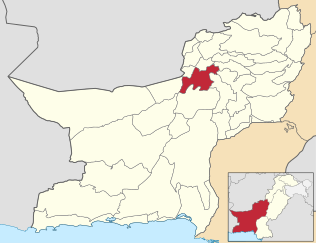 Mastung District is a district located in the northwest of Balochistan province, Pakistan. Prior to its creation as a separate district in 1991, Mastung was part of Kalat District. 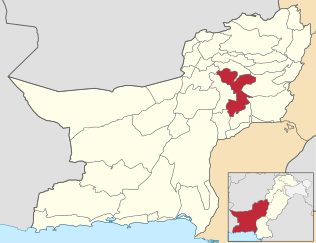 Sibi is a district in the Balochistan province of Pakistan. The main mountain ranges are Zen, Bambore and Dungan. The climatic and topography of Sibi District is quite varied compared to other districts of Balochistan. It is also known as the "Hot spot" of Pakistan where the temperatures in the summer exceed 52.6 °C (126.7 °F). Until 2013 the district had two sub-divisions, Sibi and Lehri, further organized into tehsils and sub-tehsils: Sibi, Lehri, Kutmandi and Sangan.

Sarwani,Sarvani or Sherwani is a Pashtun tribe from in Afghanistan and Pakistan. The Sarwani people originate from the city of Sherran or Current Iran-Afghan bordered Regions and from the Ghazni province.

Multan in Punjab province of Pakistan is one of the oldest cities in South Asia, though its exact age has yet to be determined. It has seen a lot of warfare because of its location on a major invasion route between South and Central Asia. It is famous for its Sufi shrines.

Luni is one of the largest branch of Durrani tribe of Pashtuns mainly living in Pakistan including in the town of Luni and Loralai districts of Balochistan province of Pakistan. Some of Luni families are also living in Quetta and other areas of Balochistan, Pakistan. Luni tribe use 'Sardar' title at the beginning of their names. to refer to their putative part-descent from the Sadozai clan of King Ahmad Shah Durrani.

The term "Balailzai (Palari)" refers to a Pashtun tribe in Afghanistan and Pakistan. Another name for the tribe of Palari is Balailzai. Like other Pashtuns, they have Eastern Iranian genetic and ethnolinguistic heritage. They descended from Gharghasht, one of Qais Abdur Rashīd's sons. Most are settled in parts of Pakistan or Afghanistan, such as Karachi, Quetta, Musakhail, Dera Ismail Khan, Mardan, Peshawar, Panni, Haripur, Kabul, Tank, Kohat, while there are some communities in the United States, United Kingdom, and other Western countries. They were, at one point in time, were holding main posts in the Government especially during the rule of Bahlol Lodhi. After his reign ended, they scattered and migrated to various parts of the Indian subcontinent and the Middle East. Panni are migrated to South India. Palari are Nawab of Kurnool and Nawab of the Carnatic which rule in Mughal Empire. Most of the Panni's are settled in Pakistan.

Sultan Mohammad Khan, also known as "Sultan Muhammad Khan Telai" was an Afghan Aristocrat, Chief Minister and regent, who resigned in favor of his younger brother Amir Dost Muhammad Khan. His other brother was Fateh Khan died 1818. During the reign of his brother he was chief minister and gouvanor of various regions of the Emirate. He was the first Musahiban, an ethnic Pashtun, and the 15th son of Sardar Payendah Khan who was killed in 1799 by Zaman Shah Durrani. Sultan Muhammad Khan´s grandfather was Hajji Jamal Khan. His immense love for materialism, like clothes and golden cutlery led to his family giving him his nickname "Telai", meaning golden. The result was amongst other things no progress and social injustice. This cases of power abuses were well known in the afghan monarchy, even in the regency of Sultan Muhammad Khan´s descendants of the Musahiban branch.