Nawabi is an Afghan sub clan mega Barakzai tribe. Its population is not known; however, the majority of this clan played an important role during the Barakzai dynasty - such as Ismail Khan Nawabi.

The name Nawabi is borrowed from the Arabic, being the honorific plural of Naib or "deputy". The name Nawab is mostly used among South Asians. In Bengal it is pronounced Nowab.

The English adjective nawabi (from the Urdu word nawwābī) describes anything associated with a nawab. [1]

Nawab, also spelt Nawaab, Navaab, Navab, Nowab, Nabob, Nawaabshah, Nawabshah or Nobab, is a Royal title indicating a sovereign ruler, often of a South Asian state, in many ways comparable to the western titles of King. The relationship of a Nawab to the Emperor of India has been compared to that of the Kings of Saxony to the German Emperor. In earlier times the title was ratified and bestowed by the reigning Mughal emperor to semi-autonomous Muslim rulers of subdivisions or princely states in the Indian subcontinent loyal to the Mughal Empire i.e. Nawabs of Bengal. The title is common among Muslim rulers of South Asia as an equivalent to the title Maharaja, however it is not exclusive to Muslims only.

Derajat, the plural of the word 'dera', is a cultural region of central Pakistan, located in the region where the provinces of Punjab, Khyber Pakhtunkhwa, and Balochistan meet. Derajat is bound by the Indus River and the Sulaiman Mountains to the west. The region consists of the districts Dera Ghazi Khan, which was founded by Ghazi Khan Mirrani, Dera Ismail Khan, which was founded by Ismail Khan Dodai, as well as two smaller districts, Rajanpur and Tank, which were separated from Dera Ghazi Khan and Dera Ismail Khan, respectively. The Baloch districts of Dera Bugti, Jafarabad, Nasirabad, as well as Sohbatpur, are adjacent to Derajat towards the southwest. The people of Derajat are called Derawal, and the varieties of Saraiki they speak are collectively called Derawali dialect, also known locally as Hindki. Pashto and Balochi are also spoken in the northern and western parts of Derajat.

The Achakzai is a Pashtun tribe that resides on both sides of the Durand Line, centered on Killa Abdullah District in Pakistan with some clans as far away as Afghanistan's Kandahar Province.

Anupshahr is a city and a municipal board in Bulandshahr district in the state of Uttar Pradesh, India. It is near the holy river Ganga. It is on Bangar alluvial.

KayamKhani or Qaimkhani is a Muslim community that claims a Rajput descent from Hindu Chauhan Rajputs. They converted to Islam in the 13th century. They are found in the Indian state of Rajasthan and in the provinces of Sindh and Punjab in Pakistan.

Jalalabad, is a city and a municipal council in Fazilka district in the Indian state of Punjab. The nearest river to it is satluj.

Fadanpura is a village in Fatehpur tehsil of Sikar district in Rajasthan, 5 km away from Fatehpur City by road. The village was founded by Jyani gotra Jats, who came from Chainpura village about 400 years back. Jat gotras in the village are Bhuria, Bagaria, Jyani, Garhwal. There are about 260 families of naruka Shekhawat and Brahmins, Rajputs and Jangids, Nai and SC-casts. Jangids are came from Surtpura village about 200 year back. There are about 450 houses in the village, with a total population above 1100 people. Five temples in this village and most oldest temple of "THAKUR G" made by shekhawat's situated in middle of this village. Other temples name are Sati Dadi Jamvay Maa Jasnath ji Mharaj and Lord Hanuman. Sati Dadi's temple, made by Khetaram Jangid, is 2km away from this village. Jasnath ji Mharaj's temple made by Jyani is the first temple you can see when you come in this village by road.

The Jagat Seths were a Bengali Baniya banking family and the title of the eldest son of the family. The family sometimes referred to as the House of Jagat Seth, were a wealthy business, banking and money lender family from Murshidabad, Bengal region in the eastern part of the Indian subcontinent, during the time of Nawab Siraj ud-Daulah. 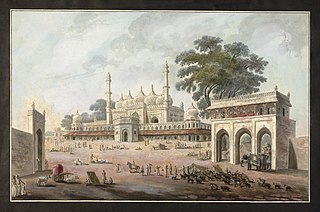 The Chawk Mosque is a mosque in the city of Murshidabad, India. It was founded in 1767 AD by Munny Begum, wife of Nawab Mir Zafar. Earlier in this place Nawab Murshid Quli Khan had built the "Chahel Sutan", which was the city's forty pillared audience hall. The mosque still recalls the stories of the ruling days of the Nawabs and still holds on its glory of the past.

Muhammad Dilawar Khanji (Gujarati:મુહમ્મદ દિલાવર ખાન, Urdu:محمد دلاور خان جی; was a Pakistani politician who was 11th Governor of Sindh from 1 March 1976 to 5 July 1977. He also claimed to be the titular Nawab of Junagarh from 1959–89.

The Third Battle of Katwa occurred between the Nawab of Bengal, Mir Qasim and the British East India Company in 1763. Dissatisfied with Nawab Mir Qasim's administration, the English deposed him in favor of his father-in-law Mir Jafar and officially declared war against Mir Qasim on July 7, 1763. The English command was given to Major Thomas Adams, who led a small force, variously estimated as between 3,000 and 5,000 men, of whom, approximately 1,000 were European. The Nawab had a total of approximately 25,000 troops at his disposal, led by the Armenian general Gurgin Khan. Although the Nawab's forces were numerically larger, they were hastily cobbled together and riven by internal strife. The Nawabi force that confronted the English at Katwa was a much smaller contingent under the leadership of the accomplished general Muhammad Taqi Khan, the Faujdar of Birbhum. 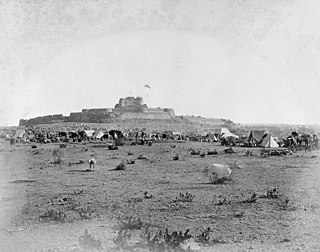 The Strategem of Peshawar was a campaign of the Durrani empire lead by Azim Khan Barakzai against the Nawab of Amb, Mir Nawab Khan Tanoli. Azim Khan who was the half brother of Dost Muhammad Khan, the King of Afghanistan.