Last updated June 10, 2021
Not to be confused with Lohana.
For other uses, see Lohani (disambiguation).

The Lohani, sometimes called Nuhani is a Pashtun tribe found in Pakistan especially in the region of Dera Ismail Khan, Tank, Lakki Marwat, Shakargarh, Haveli Lakha, Afghanistan and India. They were a mostly pastoral and migratory tribe but nowadays most of them have settled down in the plains of DI Khan, Tank and Lakki Marwat. Lohanis have four branches, Marwat, Daulat Khel, Miya Khel and Tatoor. The Tatoor tribe was crushed by Nadir shah and Daulat khel (Nawab of Tank) who brought them near to extinction. Therefore, nowadays Tatoor tribe is generally dispersed in the region of Tank, Dera Ismail khan and FR Tank and especially found in village Tatoor near Tank city. [ citation needed ]

Lohanis are descendants of a person by name of Nuhan who was son of Ismael, son of Siarnaey, son of Ibrahim alias Lodi. Nuhan got mispronounced as Luhan and his descendants are called Nuhwanraey or Lowanraey in Pashto which changed into Nuhani and Lohani in India respectively. Though Lohanis did engage in trade like other Pashtun tribes of the region, they were not restrictively merchant class like Hindu Lohanas and mostly engaged in military careers. Also unlike Lohanas, Nuhanis have extensive tribal branching, with a lineage tree culminating on a common ancestor. They show their kinship with other lodi tribes and Ghilzais. In Pashtun genealogy, they are in the category of Beittani tribes. There is no historical evidence which suggest that they migrated from Sindh. [ citation needed ]

Lohanis, like other Lodi tribes, were originally inhabitants of Ghor. From Ghor they descended into Ghazni, and engaged in pastoral pursuits. Due to conflict with neighboring Ghilzais, they migrated to Katawaz and from there they moved to the plains of Daman in the 16th century. A big portion of the tribe migrated to India on invitation of Lodi Sultans of Delhi where they became the most prominent participants in the sultanate administration and army. During Ibrahim Lodi's reign, the Lohanis of south Bihar rebelled and carved out an independent kingdom for themselves which was later incorporated into Suri empire. In their homeland, conflict arose between Lohani clans over distribution of land and revenue of Daman tract and after some battles, the Marwat and Miya Khel clans of Lohani migrated from Daman to Lakki and DI Khan tracts respectively. [1]

Lodi is a sub-group of the Ghilzai tribe of Pashtuns who live in Afghanistan and Pakistan. The Lodhi have also many sub-tribe i.e Niazi, Marwat, Daulat Khel, Mian Khel Bluch, Sur, Dotani, Khaisor and Tattor. 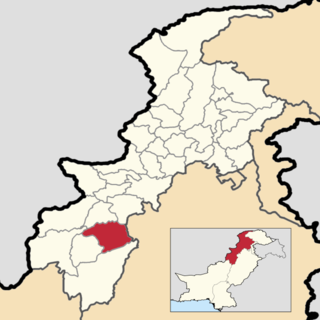 Lakki Marwat is a district in Bannu Division of Khyber Pakhtunkhwa province in Pakistan. It was created as an administrative district on July 1, 1992, prior to which it was a tehsil of Bannu District.

Povindah was the name of a class of warrior nomadic traders in present-day Afghanistan and north-western Pakistan, who belonged chiefly to the tribes of Ghilzais. Their name, which designates their occupation, is derived from the same root as the Pushtu word for to graze. 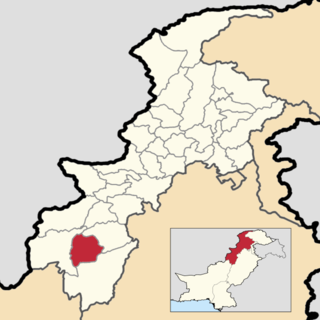 Bannu Division is one of seven divisions in Pakistan's Khyber Pakhtunkhwa province. It consists of three districts: Bannu, Lakki Marwat, and North Waziristan. According to the 2017 Pakistani Census, the division had a population of 2,656,801, making it the least populous division in the province, but it spans 9,975 km2 (3,851 sq mi) of area, and this makes it the third-smallest division by area in the province. Lakki Marwat is the largest city of Bannu Division, with around 60,000 people, while the division's namesake and second-largest city is Bannu, with just under 50,000 people. The division borders Dera Ismail Khan Division to the south and west, Kohat Division to the north and east, and the province of Punjab, Pakistan to its east. 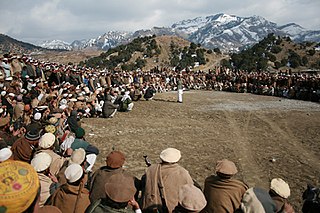 Giloti is a town and union council in the Dera Ismail Khan District of Khyber-Pakhtunkhwa. It is located at 32°9'53N 70°45'2E and has an altitude of 180 metres.