Last updated December 11, 2020
Power to choose whether or how to punish a person who has violated the law

In law, selective enforcement occurs when government officials such as police officers, prosecutors, or regulators exercise enforcement discretion, which is the power to choose whether or how to punish a person who has violated the law. The biased use of enforcement discretion, such as that based on racial prejudice or corruption, is usually considered a legal abuse and a threat to the rule of law.

In some cases, selective enforcement may be desirable. [1] For example, a verbal warning to a teenager may effectively alter their behavior without resorting to legal punishment and with the added benefit of reducing governmental legal costs. In other cases, selective enforcement may be inevitable. For example, it may be impractical for police officers to issue traffic tickets to every driver they observe exceeding the speed limit, so they may have no choice but to limit action to the most flagrant examples of reckless driving.

More recently this has become a topic of great discussion in the illegal immigration debate in the United States. The 2011 "Morton Memo" [2] laid out enforcement priorities for the U.S. Immigration and Customs Enforcement, and was intended to channel limited resources into prioritized pursuit of cases involving criminals and felons. It was interpreted as the waiver of active prosecution of non-criminal illegal aliens and the exclusive focus on criminal illegal aliens. Enforcement priorities were further defined by the Deferred Action for Childhood Arrivals program, which started in 2012. This uses the executive branch's discretionary authority to grant certain people who were illegally brought to the United States as minors the temporary authorization to live and work in the United States.

In the United States federal system, the prosecutor has wide latitude in determining when, who, how, and even whether to prosecute for apparent violations of federal criminal law. The prosecutor's broad discretion in such areas as initiating or forgoing prosecutions, selecting or recommending specific charges, and terminating prosecutions by accepting guilty pleas has been recognized on numerous occasions by the courts. [3] [4] [5]

In our criminal justice system, the Government retains "broad discretion" as to whom to prosecute. [...] This broad discretion rests largely on the recognition that the decision to prosecute is particularly ill-suited to judicial review. Such factors as the strength of the case, the prosecution's general deterrence value, the Government's enforcement priorities, and the case's relationship to the Government's overall enforcement plan are not readily susceptible to the kind of analysis the courts are competent to undertake.

Yick Wo v. Hopkins (1886) [7] was the first case where the United States Supreme Court ruled that a law that is race-neutral on its face, but is administered in a prejudicial manner, is an infringement of the Equal Protection Clause in the Fourteenth Amendment to the U.S. Constitution.

In jurisprudence, selective prosecution is a procedural defense in which a defendant argues that they should not be held criminally liable for breaking the law, as the criminal justice system discriminated against them by choosing to prosecute. In a claim of selective prosecution, a defendant essentially argues that it is irrelevant whether they are guilty of violating a law, but that the fact of being prosecuted is based upon forbidden reasons. Such a claim might, for example, entail an argument that persons of different age, race, religion, or gender, were engaged in the same illegal actions for which the defendant is being tried and were not prosecuted, and that the defendant is only being prosecuted because of a bias. In the US, this defense is based upon the 14th Amendment, which stipulates, "nor shall any state deny to any person within its jurisdiction the equal protection of the laws."

Brady disclosure consists of exculpatory or impeaching information and evidence that is material to the guilt or innocence or to the punishment of a defendant. The term comes from the 1963 U.S. Supreme Court case Brady v. Maryland, in which the Supreme Court ruled that suppression by the prosecution of evidence favorable to a defendant who has requested it violates due process.

Nolle prosequi, abbreviated nol or nolle pros, is legal Latin meaning "to be unwilling to pursue". In Commonwealth and US common law, it is used for prosecutors' declarations that they are voluntarily ending a criminal case before trial or before a verdict is rendered; it is a kind of motion to dismiss and contrasts with an involuntary dismissal.

Hartman v. Moore, 547 U.S. 250 (2006), is a decision by the Supreme Court of the United States involving the pleading standard for retaliatory prosecution claims against government officials. Following a successful lobbying attempt by the CEO of a manufacturing company against competing devices that the United States Postal Service supported, the CEO found himself the target of an investigation by U.S. postal inspectors and a criminal prosecution, which was dismissed for lack of evidence. The CEO then filed suit against the inspectors and other government officials for seeking to prosecute him in retaliation for exercising his First Amendment rights to criticize postal policy. The Court ruled, 5-2, that in order to prove that the prosecution was caused by a retaliatory motive, the plaintiff bringing such a claim must allege and prove that the criminal charges were brought without probable cause.

United States v. Hubbell, 530 U.S. 27 (2000), was United States Supreme Court case involving Webster Hubbell, who had been indicted on various tax-related charges, and mail and wire fraud charges, based on documents that the government had subpoenaed from him. The Fifth Amendment provides that no person “shall be compelled in any criminal case to be a witness against himself.” The Supreme Court has, since 1976, applied the so-called “act-of-production doctrine.” Under this doctrine, a person can invoke his Fifth Amendment rights against the production of documents only where the very act of producing the documents is incriminating in itself.

Hurtado v. California, 110 U.S. 516 (1884), was a landmark case decided by the United States Supreme Court that allowed state governments, as distinguished from the federal government, to avoid using grand juries in criminal prosecutions.

Heath v. Alabama, 474 U.S. 82 (1985), is a case in which the United States Supreme Court ruled that, because of the doctrine of "dual sovereignty", the double jeopardy clause of the Fifth Amendment to the Constitution does not prohibit one state from prosecuting and punishing somebody for an act of which they had already been convicted of and sentenced for in another state.

A tax protester is someone who refuses to pay a tax claiming that the tax laws are unconstitutional or otherwise invalid. Tax protesters are different from tax resisters, who refuse to pay taxes as a protest against a government or its policies, or a moral opposition to taxation in general, not out of a belief that the tax law itself is invalid. The United States has a large and organized culture of people who espouse such theories. Tax protesters also exist in other countries.

Several statutes, mostly codified in Title 18 of the United States Code, provide for federal prosecution of public corruption in the United States. Federal prosecutions of public corruption under the Hobbs Act, the mail and wire fraud statutes, including the honest services fraud provision, the Travel Act, and the Racketeer Influenced and Corrupt Organizations Act (RICO) began in the 1970s. "Although none of these statutes was enacted in order to prosecute official corruption, each has been interpreted to provide a means to do so." The federal official bribery and gratuity statute, 18 U.S.C. § 201, the Foreign Corrupt Practices Act (FCPA) 15 U.S.C. § 78dd, and the federal program bribery statute, 18 U.S.C. § 666 directly address public corruption.

The Assimilative Crimes Act, 18 U.S.C. § 13, makes state law applicable to conduct occurring on lands reserved or acquired by the Federal government as provided in 18 U.S.C. § 7(3), when the act or omission is not made punishable by an enactment of Congress.

The Priority Enforcement Program is a program by U.S. Immigration and Customs Enforcement (ICE), the agency responsible for immigration enforcement in the interior of the United States, under the U.S. Department of Homeland Security (DHS). PEP was an ICE program that worked with state and local law enforcement to identify illegal aliens who come in contact with state or local law enforcement, and remove those who are removable. PEP was announced by DHS Secretary Jeh Johnson in a November 20, 2014 memo as a replacement for Secure Communities (S-COMM). It builds on an updated list of immigration enforcement priorities released in another memo by Johnson issued on the same day. 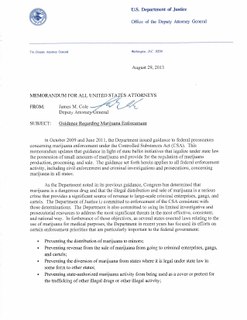 Gamble v. United States, No. 17-646, 587 U.S. ___ (2019), was a United States Supreme Court case about the separate sovereignty exception to the Double Jeopardy Clause of the Fifth Amendment to the United States Constitution, which allows both federal and state prosecution of the same crime as the governments are "separate sovereigns". Terance Martez Gamble was prosecuted under both state and then federal laws for possessing a gun while being a felon. His argument that doing so was double jeopardy was found unpersuasive due to the exception. In June 2019, the Supreme Court affirmed the lower court decision 7–2, with the majority opinion stating that there was not sufficient cause for overturning the dual sovereignty doctrine.