The thalamus is a large mass of gray matter in the dorsal part of the diencephalon of the brain with several functions such as relaying of sensory signals, including motor signals to the cerebral cortex, and the regulation of consciousness, sleep, and alertness. 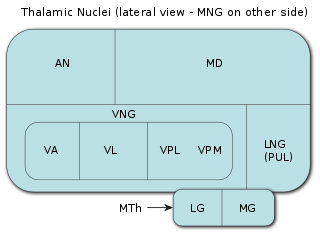 The ventral posteromedial nucleus (VPM) is a nucleus of the thalamus.

The ventral posterior nucleus is the somato-sensory relay nucleus in thalamus of the brain. 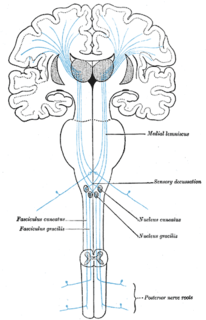 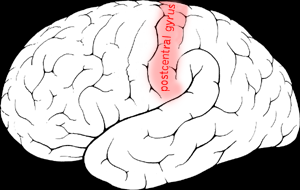 The postcentral gyrus is a prominent gyrus in the lateral parietal lobe of the human brain. It is the location of the primary somatosensory cortex, the main sensory receptive area for the sense of touch. Like other sensory areas, there is a map of sensory space in this location, called the sensory homunculus. 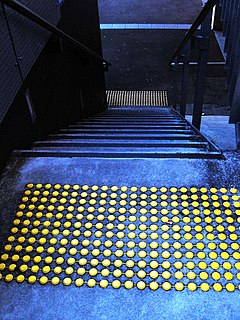 The somatosensory system is a part of the sensory nervous system. The somatosensory system is a complex system of sensory neurons and pathways that responds to changes at the surface or inside the body. The axons of sensory neurons connect with, or respond to, various receptor cells. These sensory receptor cells are activated by different stimuli such as heat and nociception, giving a functional name to the responding sensory neuron, such as a thermoreceptor which carries information about temperature changes. Other types include mechanoreceptors, chemoreceptors, and nociceptors which send signals along a sensory nerve to the spinal cord where they may be processed by other sensory neurons and then relayed to the brain for further processing. Sensory receptors are found all over the body including the skin, epithelial tissues, muscles, bones and joints, internal organs, and the cardiovascular system. 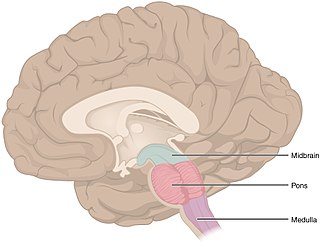 The medulla oblongata is a long stem-like structure located in the brainstem. It is anterior and partially inferior to the cerebellum. It is a cone-shaped neuronal mass responsible for autonomic (involuntary) functions ranging from vomiting to sneezing. The medulla contains the cardiac, respiratory, vomiting and vasomotor centers and therefore deals with the autonomic functions of breathing, heart rate and blood pressure. 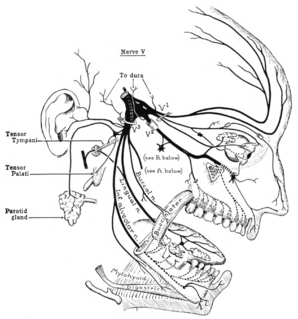 The trigeminal nerve (the fifth cranial nerve, or simply CN V) is a nerve responsible for sensation in the face and motor functions such as biting and chewing; it is the largest of the cranial nerves. Its name ("trigeminal" = tri-, or three, and - geminus, or twin: thrice-twinned) derives from the fact that each of the two nerves (one on each side of the pons) has three major branches: the ophthalmic nerve (V1), the maxillary nerve (V2), and the mandibular nerve (V3). The ophthalmic and maxillary nerves are purely sensory, whereas the mandibular nerve supplies motor as well as sensory (or "cutaneous") functions. 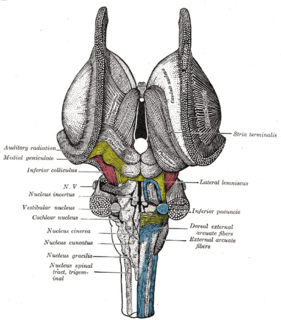 The gracile fasciculus is a nerve tract in the dorsal column-medial lemniscus pathway of the spinal cord and carries information from the lower parts of the body. The gracile fasiculus is one of many ascending tracts which carry received sensory information to the brain via the spinal cord. It is also one of the dorsal columns, the other being the cuneate fasciculus.

The ventral spinothalamic fasciculus situated in the marginal part of the anterior funiculus and intermingled more or less with the vestibulo-spinal fasciculus, is derived from cells in the posterior column or intermediate gray matter of the opposite side. Aβ fibres carry sensory information pertaining to crude touch from the skin. After entering the spinal cord the first order neurons synapse, and the second order neurons decussate via the anterior commissure. These second order neurons ascend synapsing in the VPL of the thalamus. It should also be noted incoming first order neurons can ascend or descend via the Lissauer tract.

The lateral spinothalamic tract, which is a part of the anterolateral system, is a bundle of afferent nerve fibers ascending through the white matter of the spinal cord, carrying sensory information to the brain. It carries pain, crude touch and temperature sensory information to the thalamus. It is composed primarily of fast-conducting, sparsely myelinated A delta fibers and slow-conducting, unmyelinated C fibers. These are secondary sensory neurons which have already synapsed with the primary sensory neurons of the peripheral nervous system in the posterior horn of the spinal cord. 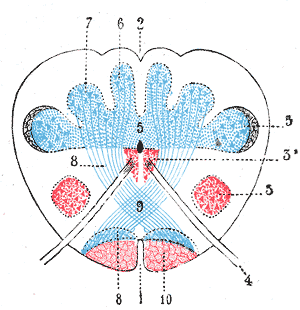 In neuroanatomy, the dorsal column nuclei are a pair of nuclei in the dorsal columns in the brainstem. The name refers collectively to the cuneate nucleus and gracile nucleus, which are present at the junction between the spinal cord and the medulla oblongata. Both nuclei contain second-order neurons of the dorsal column-medial lemniscus pathway, which carries fine touch and proprioceptive information from the body to the brain. Each nucleus has an associated nerve tract, the gracile fasciculus and the cuneate fasciculus.

The sensory decussation or decussation of the lemniscus is a decussation or crossover of axons from the gracile nucleus and cuneate nucleus, which are responsible for fine touch, proprioception and two-point discrimination of the body. The fibres of this decussation are called the internal arcuate fibres and are found at the superior aspect of the closed medulla superior to the motor decussation. It is part of the second neuron in the posterior column–medial lemniscus pathway.

The isothalamus is a division used by some researchers in describing the thalamus.

The anterior trigeminothalamic tract is a tract composed of second order neuronal axons. These fibers carry sensory information about discriminative and crude touch, conscious proprioception, pain, and temperature from the head, face, and oral cavity. The anterior trigeminothalamic tract connects the principal nucleus and spinal trigeminal nucleus to the ventral posteromedial (VPM) nucleus of the thalamus.

The trigeminal lemniscus, also called the trigeminothalamic tract, is a part of the brain that conveys tactile, pain, and temperature impulses from the skin of the face, the mucous membranes of the nasal and oral cavities, and the eye, as well as proprioceptive information from the facial and masticatory muscles.

The posterior trigeminothalamic tract is composed of second order neuronal axons. These fibers carry sensory information about discriminative touch and conscious proprioception in the oral cavity from the principal nucleus to the ventral posteromedial (VPM) nucleus of the thalamus.