Thorncrest Village is a neighbourhood in northwestern Toronto. It is a collection of tree-lined streets north of Rathburn Road, between Kipling and Islington avenues, in what used to be part of Etobicoke.

Kipling Avenue, is a street in the Cities of Toronto and Vaughan in Ontario, Canada. It is a concession road, 6 concessions (12 km) from Yonge Street, and is a major north–south arterial road. It consists of three separate sections, with total combined length of 26.4 km. (16.4 mi.).

Etobicoke is an administrative district and former city that makes up the western part of Toronto, Ontario, Canada. Etobicoke was first settled by Europeans in the 1790s; the municipality grew into city status in the 20th century. Several independent villages and towns developed within the area of Etobicoke, only to be absorbed later into Etobicoke during the era of Metro Toronto. Etobicoke was dissolved in 1998, when it was amalgamated with other Metro Toronto municipalities into the City of Toronto. Etobicoke is bordered on the south by Lake Ontario, on the east by the Humber River, on the west by Etobicoke Creek, the city of Mississauga, and Toronto Pearson International Airport, and on the north by Steeles Avenue West.

Designed by architect and town planner Eugene Faludi, the village was considered one of Toronto's first modern suburbs. Village residents own three parkettes and a park with a clubhouse, tennis courts, a swimming pool and a playground. 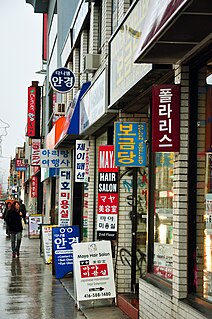 Koreatown is an ethnic enclave in Toronto, Canada known for its Korean businesses. It is located along Bloor Street between Christie and Bathurst Streets in Seaton Village. The adoption of a more liberal immigration policy by the Canadian government in 1967 led to an influx of Korean immigrants, many of whom settled in the Toronto area. Indeed, Toronto has the largest single concentration of Koreans in Canada with almost 50,000 living in the city, according to the 2001 Census. Many of them settled in the Bloor and Bathurst area, and before long, a small Korean business neighbourhood emerged along Bloor Street, centred on the intersection of Bloor and Manning Avenue. Restaurants, bakeries, gift shops, grocery stores, and travel agencies began to open up, most of which catered to the Korean-Canadian community. Today, although many Koreans work in the region, very few Koreans in fact live in Koreatown.

The Bridle Path is an upscale residential neighbourhood in North York, Toronto, Ontario, Canada, that is characterized by large multimillion-dollar mansions and two to four acre lot sizes. It is often referred to as "Millionaires' Row". It is the most affluent neighbourhood in Canada with an average household income of $936,137, as well as by property values with an average dwelling value of $2.24M.

Yonge−Eglinton is a neighbourhood in Toronto, Ontario, Canada, at the intersection of Yonge Street and Eglinton Avenue. It is central to the area of Midtown Toronto, one of four central business districts outside Downtown Toronto. The City of Toronto defines its boundaries as Briar Hill Avenue to the north, Yonge Street to the east, Frobisher Avenue and a line in that direction west to Elmsthorpe Avenue, then north to Eglinton Avenue, east to Avenue Road and north to Briar Hill.

Guildwood, also known as Guildwood Village, is a residential neighbourhood in Scarborough, Toronto, Ontario, Canada. It is located along the Scarborough Bluffs, south of Kingston Road, from Grey Abbey Trail in the east to the end of Sylvan Avenue in the west.

Etobicoke Centre is a federal electoral district in Ontario, Canada, that has been represented in the House of Commons of Canada since 1979.

Bloordale Village is a Business Improvement Area (BIA) that is located along Bloor Street from Lansdowne Avenue to Dufferin Street, west of downtown in Toronto, Ontario, Canada. It sits on the southern border of the Wallace Emerson neighbourhood and the northern border of the Brockton Village neighbourhood. The district is home to a mix of shopping, bars and vintage clothing, book, and video stores. There are also many, many furniture stores.

Erindale is an historical neighbourhood located within the central part of the city of Mississauga, west of Toronto, Ontario, Canada. Erindale is named in honour of the birthplace of the first rector of the village, Reverend James Magrath from Erin (Ireland).

Dufferin Mall is a shopping mall in Toronto, Ontario, Canada. It is located on the west side of Dufferin Street, south of the intersection of Bloor Street West, in the Brockton Village neighbourhood. It was built in the 1950s on the site of a former race track.

York University Heights, also known as Northwood Park, is a neighbourhood in Toronto, Ontario, Canada. It is one of Toronto's northern-most neighbourhoods, located along the northern boundary of Steeles Avenue in the former city of North York. The neighbourhood is so named because it contains the main campus of York University. This area is most popular with immigrants of Italian and Chinese descent who have established communities in the area. It is located between Sheppard Avenue and Steeles Avenue east of Black Creek.

Victoria Village, sometimes referred to as Sloane, is a neighbourhood in the city of Toronto, Ontario, Canada bounded on the west by the Don Valley, on the north by Lawrence Avenue East, on the east by Victoria Park Avenue, and on the south by Eglinton Avenue East, although there is a small area south of Eglinton to Sunrise Avenue that is sometimes included. It is located in the southeast of the former city of North York. Its population is diverse in ancestral backgrounds with a larger proportion of South Americans than most of the city. 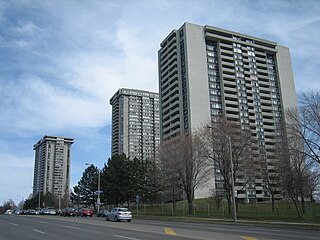 Don Valley Village is a neighbourhood in the city of Toronto, Ontario, Canada. It is located in the former suburb of North York. It is located north of Highway 401, and is bounded by Sheppard Avenue to the south, Leslie Street to the west, Finch Avenue to the north and Highway 404 to the east. Like the nearby Don River Valley, the neighbourhood has hill and dale topography. 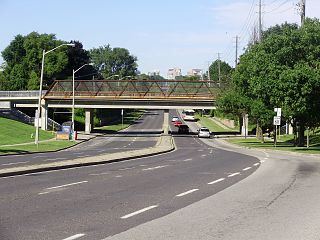 Bayview Woods-Steeles is a neighbourhood located in the northern tip of the city of Toronto, Ontario, Canada, formerly in North York before it was amalgamated into Toronto in 1998. It is part of federal and provincial electoral district Willowdale, and Toronto electoral ward 24: Willowdale (East). In 2006, it had a population of 13,295. The area is divided by a series of ravines, and is often not considered a neighbourhood unto itself. Rather the sections are more often divided between the neighbouring areas of Hillcrest Village, Bayview Village, and Newtonbrook.

Old Mill is a neighbourhood of Toronto, Ontario, Canada on the banks of the Humber River. It is located north and west of the intersection of Bloor Street and Jane Street. The area takes its name from the old grist mill ruins on the west bank of the river, now converted into a hotel. The City of Toronto includes this neighbourhood in the official "Lambton Baby Point" neighbourhood which includes the Baby Point enclave and former Lambton village areas to the north.

Midtown Toronto is one of four central business districts outside Downtown Toronto in Toronto, Ontario, Canada. Located in the north of Old Toronto, its borders are roughly defined by Bloor Street to the south and Lawrence Avenue to the north, Bayview Avenue to the east and Ossington Avenue, Oakwood Avenue, and Marlee Avenue to the west. The central neighbourhood of the area is Yonge–Eglinton.

Toronto District Christian High School (TDChristian) is an independent Christian secondary school located in the city of Vaughan, Ontario, Canada, in the city's Woodbridge neighbourhood. It was founded in 1960 and began classes in 1963. TDCH currently has an enrollment of about 450 students. TDCH is a member of the Ontario Alliance of Christian Schools.

Highland Creek is a river in the Scarborough district of Toronto, Ontario, emptying into Lake Ontario at the eastern end of the Scarborough Bluffs. It is home to several species of fish including trout, carp, bass and salmon. It is a meandering river which, like most rivers in Toronto, travels through a glacial ravine formed after the last Ice Age. The Highland Creek watershed, including tributaries, is almost entirely contained within Scarborough. 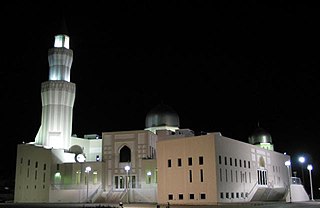 The Baitul Islam is a mosque in Vaughan north of Toronto run by the Ahmadiyya Muslim Jama'at (AMJ) in Canada. It was inaugurated on October, 17th 1992 in the presence of the Khalifatul Masih IV and many Members of Parliament. 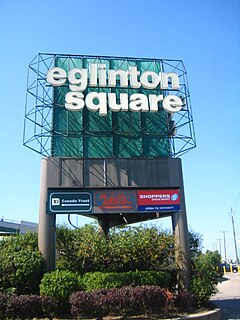 Eglinton Square Shopping Centre is an enclosed shopping mall in Toronto, Ontario, Canada, located at Eglinton Avenue East and Victoria Park Avenue in Scarborough's Golden Mile neighbourhood. It opened in 1954. It is owned by Kingsett Capital and under the management of Bentall Kennedy (Canada) LP. It has approximately 279,000 sq ft (25,900 m2) of retail space with over 80 retail outlets. The mall is located on what was once the site of James Neilson's farm.