Tom Osborne led Nebraska to its second straight national title with a victory over Florida in the Fiesta Bowl.

This matchup was only possible because of the new Bowl Alliance. Under the old system, Nebraska would have been tied to the Orange Bowl and Florida to the Sugar Bowl. The Bowl Alliance created a national championship game which would rotate between the Orange, Sugar, and Fiesta Bowls free of conference tie-ins and featuring the No. 1 and No. 2 teams as chosen by the Bowl Alliance Poll. The Pac-10 and Big Ten chose not to participate, keeping their tie-ins with the Rose Bowl.

Nebraska was a football dynasty, playing in its third consecutive national title game, and became the first school to claim back-to-back titles since the 1970s. This was a dominant Nebraska team, averaging 52 points per game and a 39-point average margin of victory, including a 62–24 victory over Florida. This lopsided victory came after Florida was picked by many sportswriters to win the game.

Ohio State almost created a national title controversy, going into its final regular season game against Michigan undefeated and ranked No. 2. Had they finished the season No. 2 the Bowl Alliance would have been unable to pit No. 1 vs. No. 2 as the Big Ten champ was tied to the Rose Bowl. However, Michigan upset Ohio State. Buckeye running back Eddie George still won the Heisman Trophy.

Things were lively in the state of Florida, where the Florida Gators won their third straight SEC championship. Florida State started the season No. 1, but lost an ACC game for the first time ever when Virginia stopped a last-minute drive a few inches from the end zone, knocking them out of the national title race.

However, Northwestern was able to steal the show as the year's Cinderella story. Its only regular season loss came against Miami-OH. Northwestern began the season with an upset of Notre Dame and went on to defeat Michigan and Penn State later in the season. Undefeated in the Big Ten after decades as a doormat, the Wildcats went on to face USC in the Rose Bowl. However, the Wildcats lost to the Trojans in what was a see-saw game until USC pulled away in the fourth quarter.

Miami and Alabama had to sit the post season out, as they were on NCAA probation.

The Southwest Conference played its final game ever, an 18–17 Houston win over Rice. Four of its members would join the Big 8 to form the Big 12; the other four were split between the WAC and the newly formed Conference USA.

The Hall of Fame Bowl, originally played in Birmingham, then moved to Tampa, Florida gained corporate sponsorship, and was now known as the Outback Bowl. The Freedom Bowl was discontinued and the Holiday Bowl absorbed its WAC tie-in.

The first ever Division I-A overtime game was played during the 1995 bowl season, the Las Vegas Bowl between Toledo and Nevada. Overtime would be adopted permanently for all games in 1996. Due to the adoption of overtime, the season-ending 3–3 game between Wisconsin and Illinois on November 25 is the last tied game in Division I-A. [3]

One team upgraded from Division I-AA prior to the season. As such, the total number of Division I-A schools increased to 108.

+Ohio State, a Big Ten school, was not part of the Bowl Alliance. Florida was No. 3 during weeks 11 through 13.

The Tom Bowl is a fan-supported college football bowl game scheduled to be played annually at Frank A. Schafer Field in Beal City, Michigan. The game is not sanctioned by the NCAA. It annually invites the #1 and #2 teams in the nation to play in a college football championship game. Although the group formally invites college teams every year to play in the bowl, no school has ever accepted an invitation. However, some athletic directors and conference presidents/commissioners have sent response letters, declining while sarcastically telling the group that it was an honor to be invited. Responses have been received from Jim Delany, Jack Swarbrick, and Pat Richter, among others.

The 1994 NCAA Division I-A football season, play of college football in the United States at the NCAA Division I-A level, began in August 1994 and ended on January 2, 1995. Nebraska, who finished the season undefeated, ended the year ranked No. 1 in both the Associated Press and Coaches polls. This was the first national championship of coach Tom Osborne's career at Nebraska, having come close the year before, when Nebraska lost to eventual national champion Florida State on a missed field goal as time expired. 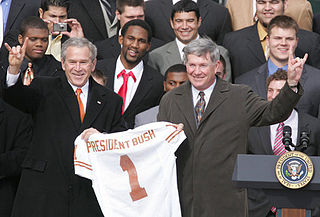