Last updated March 17, 2021
Food and drink of the Democratic Republic of the Congo

Less than two percent of the land is cultivated, and most of this is used for subsistence farming. Congo's farmland is the source of a wide variety of crops. These include maize, rice, cassava (manioc), sweet potatoes, yam, taro, plantain, tomatoes, pumpkin and varieties of peas and nuts. These foods are eaten throughout the country, but there are also regional dishes. The most important crops for export are coffee and palm oil.

Wild plants, [1] fruits, mushrooms, [1] honey and other foods such as bushmeat and fish are also gathered, hunted, and used in dishes. [1] People often sell these crops at markets, or by the roadside. Cattle breeding and the development of large-scale agricultural businesses has been hindered by the recent war and the poor quality of the road system.

Congolese meals often consist of a starchy ingredient, along with vegetables and meat in the form of a stew. The starch can come in the form of a paste or mash made of cassava or corn flour, called fufu or ugali . When eaten, the fufu is rolled into golf ball-sized balls and dipped into the spicy stew—often an indentation is made with the thumb in order to bring up a thimbleful of sauce.

A type of fermented bread, kwanga, made from cassava, is commercially produced throughout the country. Lituma is a popular plantain dish made from mashed plantains which are formed into balls and baked. Sweet potatoes are prepared in a similar way, and mixed with roasted peanuts in some parts of the country. Rice is often mixed with beans.

To accompany these starchy ingredients, green vegetables such as cassava leaves, tshitekutaku (a spinach-like plant) and okra are often added. Mushrooms, especially prized amongst the Luba people, are often seen as a substitute for meat in times of shortage. Though total vegetarianism is unknown, most meals are eaten without meat due to its high price.

Fish are plentiful along the River Congo, its tributaries, and various lakes, and are baked, boiled or fried for immediate consumption, or smoked or salted when preserved. Markets often sell ready-to-eat peppered fish baked in banana leaves. Goat is the most widely consumed meat. [1] Mwambe is a common way of cooking chicken with peanut sauce. [1] Edible insects such as grasshoppers and caterpillars are eaten; [1] they tend to have a nutty flavour.

Sauces to mix with the ingredients above can be made with tomatoes, onions, and the local aromatic herbs. Vegetable oil, together with salt, hot red chile pepper and sweet green pepper are used to impart extra flavour. These spices are less frequently used in the far south.

Kinshasa's nganda restaurants, with a greater mix of ethnicities, are ethnic restaurants serving food from specific parts of the country, as well as Western imports such as bread and beer. [2] Often owned by unmarried women, the nganda occupy a middle ground between bars and restaurants. Three typical types of nganda restaurants are:

Nganda restaurants are often geared not only to specific regions, but also different classes—from migrant menial workers and miners, to professionals and government officials.

Cooking bananas are banana cultivars in the genus Musa whose fruits are generally used in cooking. They may be eaten ripe or unripe and are generally starchy. Many cooking bananas are referred to as plantains or green bananas, although not all of them are true plantains. Bananas are treated as a starchy fruit with a relatively neutral flavour and soft texture when cooked. Bananas fruit all year round, making them a reliable all-season staple food. 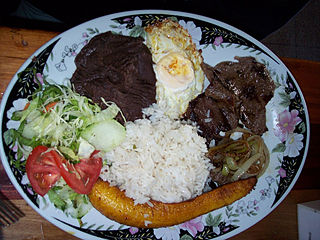 Costa Rican cuisine is known for being fairly mild, with high reliance on fruits and vegetables. Rice and black beans are a staple of most traditional Costa Rican meals, often served three times a day. Costa Rican fare is nutritionally well rounded, and nearly always cooked from scratch from fresh ingredients. Owing to the location of the country, tropical fruits and vegetables are readily available and included in the local cuisine.

Trinidad and Tobago cuisine is the cuisine of the Caribbean island state of Trinidad and Tobago. It reflects a fusion of African, Creole, Indian-South Asian, Chinese, Amerindian, Arab, European, and Latin American-Spanish-Portuguese cuisines.

Fufu is a Twi word meaning "mash or mix" for a soft and doughy staple food of the Akan ethnic groups in Ghana, and made out of boiled cassava mixed with plantains or cocoyams and pounded together in a mortar (waduro) with a pestle (woma) unique to the Akans and only eaten with liquid soups (nkwan) such as, Light soup, Abenkwan, Nkatenkwan, Abunabun soup. While native to Ghana, fufu now commonly features in many countries in West Africa and Central Africa such as Ghana, Sierra Leone, Guinea, Liberia, Cote D'Ivoire, Benin, Togo, Nigeria, both Congos, Cameroon, the Central African Republic and Gabon, and is also found in the Caribbean. It is often made in the traditional Ghanaian, Nigerian and Cuban method of separately mixing and pounding equal portions of cassava and green plantain flour with water. It is then adjusted to either increase or decrease the viscosity of the fufu based on personal preferences. Other flours, such as semolina, maize flour or mashed plantains may take the place of cassava flour. Fufu is often served with groundnut soup, palm nut soup, egusi soup, abunuabunu or light soup. Fufu is eaten with the fingers, and a small ball of it can be dipped into an accompanying soup or sauce.

Traditionally, the various cuisines of Africa use a combination of locally available fruits, cereal grains and vegetables, as well as milk and meat products, and do not usually have food imported. In some parts of the continent, the traditional diet features an abundance of milk, curd and whey products. 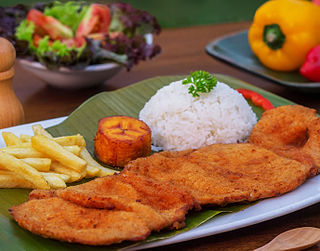 Ghanaian cuisine is the cuisine of the Ghanaian people. Ghanaian main dishes are organized around a starchy staple food, which goes with a sauce or soup containing a protein source. The main ingredients for the vast majority of soups and stews are tomatoes, hot peppers and onions. As a result, nearly all Ghanaian soups and stews are red or orange in appearance.

West African cuisine encompasses a diverse range of foods that are split between its 16 countries. In West Africa, many families grow and raise their own food, and within each there is a division of labor. Indigenous foods consist of a number of plant species and animals, and are important to those whose lifestyle depends on farming and hunting.

Nigerian cuisine consists of dishes or food items from the hundreds of ethnic groups that comprise Nigeria. Like other West African cuisines, it uses spices and herbs with palm or groundnut oil to create deeply flavored sauces and soups.

A great variety of cassava-based dishes are consumed in the regions where cassava is cultivated, and they include many national or ethnic specialities.

Ivorian cuisine is the traditional cuisine of Côte d'Ivoire, or the Ivory Coast, and is based on tubers, grains, pig, chicken, seafood, fish, fresh fruits, vegetables and spices. It is very similar to that of neighboring countries in West Africa. Common staple foods include grains and tubers. Côte d'Ivoire is one of the largest cocoa producers in the world and also produces palm oil and coffee.

Chadian cuisine is the cooking traditions, practices, foods and dishes associated with the Republic of Chad. Chadians use a medium variety of grains, vegetables, fruits and meats. Commonly consumed grains include millet, sorghum, and rice as staple foods. Commonly eaten vegetables include okra and cassava. A variety of fruits are also eaten. Meats include mutton, chicken, pork, goat, fish, lamb and beef. The day's main meal is typically consumed in the evening on a large communal plate, with men and women usually eating in separate areas. This meal is typically served on the ground upon a mat, with people sitting and eating around it.

Gabonese cuisine is the cooking traditions, practices, foods and dishes associated with Gabon, a sovereign state on the west coast of Central Africa. French cuisine is prevalent as a notable influence, and in larger cities various French specialties are available. In rural areas, food staples such as cassava, rice and yams are commonly used.

Barbadian cuisine, also called Bajan cuisine, is a mixture of African, Portuguese, Indian, Irish, Creole and British influences. A typical meal consists of a main dish of meat or fish, normally marinated with a mixture of herbs and spices, hot side dishes, and one or more salads. The meal is usually served with one or more sauces.