Stochastic games generalize Markov decision processes to multiple interacting decision makers, as well as strategic-form games to dynamic situations in which the environment changes in response to the players’ choices. [1]

Stochastic two-player games on directed graphs are widely used for modeling and analysis of discrete systems operating in an unknown (adversarial) environment. Possible configurations of a system and its environment are represented as vertices, and the transitions correspond to actions of the system, its environment, or "nature". A run of the system then corresponds to an infinite path in the graph. Thus, a system and its environment can be seen as two players with antagonistic objectives, where one player (the system) aims at maximizing the probability of "good" runs, while the other player (the environment) aims at the opposite.

In many cases, there exists an equilibrium value of this probability, but optimal strategies for both players may not exist.

We introduce basic concepts and algorithmic questions studied in this area, and we mention some long-standing open problems. Then, we mention selected recent results.

The ingredients of a stochastic game are: a finite set of players

(either a finite set or a measurable space

(either a finite set or a measurable space

is the action profiles, to

is the probability that the next state is in

given the current state

and the current action profile

; and a payoff function

, is the payoff to player

as a function of the state

and the action profile

The game starts at some initial state

, then observe the action profile

, and then nature selects

according to the probability

. A play of the stochastic game,

, defines a stream of payoffs

) is the game where the payoff to player

-stage game is the game where the payoff to player

, of a two-person zero-sum stochastic game

, with finitely many states and actions exists, and Truman Bewley and Elon Kohlberg (1976) proved that

converges to a limit as

goes to infinity and that

converges to the same limit as

is the game where the payoff to player

is the "limit" of the averages of the stage payoffs. Some precautions are needed in defining the value of a two-person zero-sum

and in defining equilibrium payoffs of a non-zero-sum

of a two-person zero-sum stochastic game

exists if for every

there is a positive integer

and a strategy pair

of player 2 such that for every

, and the expectation of

. Jean-François Mertens and Abraham Neyman (1981) proved that every two-person zero-sum stochastic game with finitely many states and actions has a uniform value.

has a uniform equilibrium payoff

there is a positive integer

and a strategy profile

such that for every unilateral deviation by a player

, and the expectation of

. Nicolas Vieille has shown that all two-person stochastic games with finite state and action spaces have a uniform equilibrium payoff.

has a limiting-average equilibrium payoff

there is a strategy profile

such that for every unilateral deviation by a player

, the expectation of the limit inferior of the averages of the stage payoffs with respect to the probability on plays defined by

, and the expectation of the limit superior of the averages of the stage payoffs with respect to the probability on plays defined by

. Jean-François Mertens and Abraham Neyman (1981) proves that every two-person zero-sum stochastic game with finitely many states and actions has a limiting-average value, and Nicolas Vieille has shown that all two-person stochastic games with finite state and action spaces have a limiting-average equilibrium payoff. In particular, these results imply that these games have a value and an approximate equilibrium payoff, called the liminf-average (respectively, the limsup-average) equilibrium payoff, when the total payoff is the limit inferior (or the limit superior) of the averages of the stage payoffs.

A Markov perfect equilibrium is a refinement of the concept of sub-game perfect Nash equilibrium to stochastic games.

Stochastic games have applications in economics, evolutionary biology and computer networks. [2] [3] They are generalizations of repeated games which correspond to the special case where there is only one state.

In statistical mechanics, the Fokker–Planck equation is a partial differential equation that describes the time evolution of the probability density function of the velocity of a particle under the influence of drag forces and random forces, as in Brownian motion. The equation can be generalized to other observables as well. It is named after Adriaan Fokker and Max Planck, and is also known as the Kolmogorov forward equation, after Andrey Kolmogorov, who independently discovered the concept in 1931. When applied to particle position distributions, it is better known as the Smoluchowski equation, and in this context it is equivalent to the convection–diffusion equation. The case with zero diffusion is known in statistical mechanics as the Liouville equation. The Fokker–Planck equation is obtained from the master equation through Kramers–Moyal expansion.

The Laplace–Stieltjes transform, named for Pierre-Simon Laplace and Thomas Joannes Stieltjes, is an integral transform similar to the Laplace transform. For real-valued functions, it is the Laplace transform of a Stieltjes measure, however it is often defined for functions with values in a Banach space. It is useful in a number of areas of mathematics, including functional analysis, and certain areas of theoretical and applied probability. 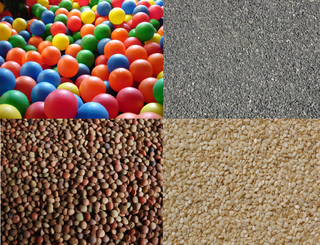 A vertex model is a type of statistical mechanics model in which the Boltzmann weights are associated with a vertex in the model. This contrasts with a nearest-neighbour model, such as the Ising model, in which the energy, and thus the Boltzmann weight of a statistical microstate is attributed to the bonds connecting two neighbouring particles. The energy associated with a vertex in the lattice of particles is thus dependent on the state of the bonds which connect it to adjacent vertices. It turns out that every solution of the Yang–Baxter equation with spectral parameters in a tensor product of vector spaces yields an exactly-solvable vertex model.

In mathematical analysis, the Russo–Vallois integral is an extension to stochastic processes of the classical Riemann–Stieltjes integral

In probability theory, the Palm–Khintchine theorem, the work of Conny Palm and Aleksandr Khinchin, expresses that a large number of renewal processes, not necessarily Poissonian, when combined ("superimposed") will have Poissonian properties.

Stochastic chains with memory of variable length are a family of stochastic chains of finite order in a finite alphabet, such as, for every time pass, only one finite suffix of the past, called context, is necessary to predict the next symbol. These models were introduced in the information theory literature by Jorma Rissanen in 1983, as a universal tool to data compression, but recently have been used to model data in different areas such as biology, linguistics and music.