Last updated May 30, 2020
descendants of Rajputs who are followers of Islam

Muslim Rajputs are the patrilineal descendants of Rajputs of Northern regions of the Indian subcontinent who are followers of Islam. [1] Today, Muslim Rajputs can be found in Northern India and some parts of Pakistan. [2] They are further divided into different clans.

The term Rajput is traditionally applied to the original Suryavanshi, Chandravanshi and Agnivanshi clans, who claimed to be Kshatriya in the Hindu varna system.

Conversion to Islam and ethos

There are recorded instances of recent conversions of Rajputs to Islam in Western Uttar Pradesh, Khurja tahsil of Bulandshahr. [3]

Despite the difference in faith, where the question has arisen of common Rajput honour, there have been instances where both Muslim and Hindu Rajputs have united together against threats from external ethnic groups. [4]

The Kharagpur Raj was a Muslim Kindwar Rajput chieftaincy in modern-day Munger district of Bihar. [5] [6] Raja Sangram Singh led a rebellion against the Mughal authorities and was subsequently defeated and executed. His son, Toral Mal, was made to convert to Islam and renamed as Roz Afzun. Roz Afzun was a loyal Commander to the Emperors Jahangir and Shah Jahan and Jahangir referred to him as his "favourite" commander in the empire. [7] Another prominent chieftain of this dynasty was Tahawar Singh who played an active role in the Mughal expedition against the nearby Cheros of Palamu. [8]

The Gujarat Sultanate was an independent Muslim Rajput kingdom established in the early 15th century by the Muzaffarid dynasty in Gujarat. The Muzaffarids were descended from Hindu Tanka Rajputs with origins in Thanesar in modern-day Haryana. [9] Under the dynasty, trade, culture, and Indo-Islamic architecture flourished. The city of Ahmedabad was founded by the dynasty.

Mewat was a kingdom in Rajputana with its capital at Alwar ruled by a Khanzada Rajput dynasty during the period of the Delhi Sultanate in India. Mewat was covered over a wide area, it included Hathin tehsil, Nuh district, Tijara, Gurgaon, Kishangarh Bas, Ramgarh, Laxmangarh Tehsils Aravalli Range in Alwar district and Pahari, Nagar, Kaman tehsils in Bharatpur district of Rajasthan and also some part of Mathura district of Uttar Pradesh. The last ruler of Mewat, Hasan Khan Mewati was killed in the battle of Khanwa against the Mughal emperor Babur. The Khanzadas were descended from Hindu Jadaun Rajputs. [10]

The Qaimkhanis were a Muslim Rajput dynasty who were notable for ruling the Fatehpur-Jhunjhunu region in Rajasthan from the 1300s to the 1700s. [11] [12] They were descended from Hindu Chauhan Rajputs.

The Lalkhanis are a Muslim Rajput community and a sub-clan of the Bargujars. They were the Nawabs of various estates in Western Uttar Pradesh. These included Chhatari and neighbouring regions including parts of Aligarh and Bulandshahr. [13]

The Mayi clan were the chieftains of the Narhat-Samai (Hisua) chieftaincy in modern-day Nawada district in South Bihar. The founder of the Mayi clan was Nuraon Khan who arrived in Bihar in the 17th century. His descendants were Azmeri and Deyanut who were granted zamindari rights over six parganas by the Mughal authorities. Deyanut's son was Kamgar Khan who expanded his land by attacking and plundering neighbouring zamindars. Kamgar Khan also led numerous revolts against the Mughals and attempted to assert the Mayi's independence. His descendant was Iqbal Ali Khan who took part in the 1781 revolt in Bihar against the British however his revolt failed and Mayi's lost much of their land. [14]

Muslim Rajputs often retain common social practices (such as purdah [seclusion of women], which is generally followed by Hindu and Muslim Rajputs). [2]

Mewat is a historical region of Haryana and Rajasthan states in northwestern India. The loose boundaries of Mewat are not precisely determined but generally include Hathin tehsil and Nuh district of Haryana, Alwar and Bharatpur districts of Rajasthan, and Chhata Tehsil of Mathura district in Uttar Pradesh. The region roughly corresponds to the ancient kingdom of Matsya, founded in the 5th century BCE. Mewati dialect, a slight variant of the Haryanvi and Rajasthani dialects of Hindi, is spoken in rural areas of the region. Mewati Gharana is a distinctive style of Indian classical music.

Meo is a Muslim community from North-Western India, particularly in and around Mewat that includes Mewat district of Haryana and parts of adjacent Alwar and Bharatpur districts in Rajasthan. Meos speak Mewati. 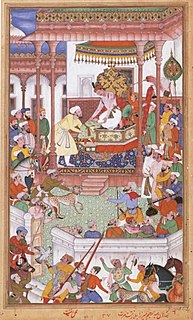 Khanzada Mirza Khan Abdul Rahim Khan-e-Khana, also known as Rahim, was a poet who lived during the rule of Mughal emperor Akbar. He was one of the nine important ministers (dewan) in his court, also known as the Navaratnas. Rahim is known for his Hindi dohe (couplets) and his books on astrology. The village of Khan Khana, which is named after him, is located in the Nawanshahr district of the state of Punjab, India.

Bihari Muslims are people originating and tracing descent from the Indian state of Bihar who practice the religion of Islam.

Ferozepur Jhirka, also known as Ferojpur Jhirka, is a town in Nuh district in the state of Haryana, India.

Nuh is the district headquarters of the Nuh district in the Indian state of Haryana. It lies on the National Highway 248 or Gurgaon-Sohna-Alwar highway about 45 kilometres (28 mi) from Gurgaon.

Sohna is a town and a municipal committee in the Gurgaon district of Haryana, India. A popular tourist weekend and conference retreat, it is on the highway from Gurgaon to Alwar near a vertical rock. Sohna is known for its hot springs and Shiva temple. Sohna tehsil is part of Ahirwal Region. Ahir and Gujjar khatana's dominated area.

The Ghosi are a Muslim community found mainly in North India.

The Khanzada or Khan Zadeh are a community of Muslim Rajputs found in the Awadh reigon of Uttar Pradesh, India. This community is distinct from the Rajasthani Khanzada, the descendants of Wali-e-Mewat Raja Naher Khan, who are a sub-clan of Jadaun gotra. They are also a community of Muslim Rajputs. They refer to themselves as Musalmaan Rajputs, or sometimes just Rajputs. In addition, a small number of Khanzada are also found in the Terai region of Nepal.

The Bharsaiyan or Bharaiyan are a Rajput clan found in the state of Uttar Pradesh in India. 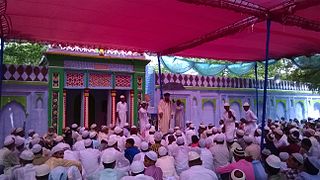 The Muslim population in Uttar Pradesh was estimated to be 43,988,561 in 2018 and forms the largest religious minority in the Indian state of Uttar Pradesh. Muslims of Uttar Pradesh have also been referred to as Hindustani Musalman. They do not form a single ethnic community, but are differentiated by sectarian and Baradari divisions, as well as by language and geography. Nevertheless, the community shares some unifying cultural factors.

The Bachgoti Khanzada is a Muslim community found in the state of Uttar Pradesh in India. They are a sub-group within the larger Khanzada community of eastern Uttar Pradesh. Common surnames include khan and kunwar.

The Khanzada are a sub-group wirthin the Khanzada community found in eastern Uttar Pradesh in India. They also refer to themselves as Gautam Thakurs. The Gautam Khanzada are Muslim converts from the Gautam community.

Wali-e-Mewat Raja Naher Khan, Bahadur, f.k.aRaja Sonpar Pal, the ruler of Mewat State, was the progenitor of Khanzada Rajput tribe. He converted to Islam during the era of Firuz Shah Tughlaq in 1355.

Fateh-ud-duniya-wa-ud din Wali-e-Mewat Raja Khanzada Jalal Khan Bahadur a.k.a. Jallu Khan, son of Khanzada Feroz Khan, was the Khanzada Rajput ruler of Mewat State from 1422 to 1443. He succeeded his father as Wali-e-Mewat in 1422.

The Khanzadas of Mewat were a dynasty of chiefs from Rajputana who had their capital at Alwar. The Khanzadas were Muslim Rajputs who descended from Raja Sonpar Pal who was a Jadaun Rajput who converted to Islam during the period of the Delhi Sultanate in India.

Kharagpur Raj was a prominent chieftaincy in medieval Bihar situated mainly in modern-day Munger district. They were notable for being one of the few chieftancies in Bihar to convert to Islam and many of the rulers became firm allies of the Mughal authorities. At its peak, the Kharagpur Raj encompassed parts of the modern-day districts of Munger, Bhagalpur, Jamui, Lakhisarai, Godda and Deoghar.

The Mayi were a clan of Muslim Rajputs who controlled the Narhat-Samai (Hisua) chieftaincy in modern-day Nawada district of Bihar and were considered to have played a prominent role in the political history of Southern Bihar.