Last updated July 23, 2021
Not to be confused with custom car, or customized car, for example CadZZilla.

A coachbuilder, or body-maker, manufactures bodies for passenger-carrying vehicles. [note 1] Coachwork is the body of an automobile, bus, horse-drawn carriage, or railway carriage. The word "coach" was derived from the Hungarian town of Kocs. [1]

Coachbuilt body is the British English name for the coachbuilder's product. Custom body is the standard term in North American English.

"Coachbuilt body" is also the British English name for mass-produced vehicles built on assembly lines using the same but simplified techniques until more durable all-steel bodies replaced them in the early 1950s.

The coachbuilder craftsmen who might once have built bespoke or custom bodies continue to build bodies for short runs of specialized commercial vehicles such as luxury motor coaches or recreational vehicles or motor-home bodied upon a rolling chassis provided by an independent manufacturer. A 'conversion' is built inside an existing vehicle body.

A British trade association the Worshipful Company of Coachmakers and Coach Harness Makers was incorporated in 1690. Some British coachmaking firms operating in the 20th century were established even earlier. Rippon was active in the time of Queen Elizabeth I, Barker founded in 1710 by an officer in Queen Anne's Guards. Brewster, the oldest in the U.S., was formed in 1810. [2]

The maker would provide the coachworks with a chassis frame, drivetrain (consisting of an engine, gearbox, differential, axles, and wheels), brakes, suspension, steering system, lighting system, spare wheel(s), front and rear mudguards and (later) bumpers, scuttle (firewall) and dashboard. The very easily damaged honeycomb radiator, later enclosed and protected by a shell, typically became the main visual element identifying the chassis' brand. To maintain some level of control over the final product, chassis manufacturers' warranties would be voided by mating them with unapproved bodies.

Custom or bespoke coachbuilt bodies were made and fitted to another manufacturer's rolling chassis by the craftsmen who had previously built bodies for horse-drawn carriages and coaches. Separate coachbuilt bodies became obsolete when vehicle manufacturers found they could no longer meet their customers' demands by relying on a simple separate chassis (on which a custom or bespoke body could be built) mounted on leaf springs on beam axles. Unibody or monocoque combined chassis and body structures became standardised during the middle years of the 20th century to provide the rigidity required by improved suspension systems without incurring the heavy weight, and consequent fuel penalty of a truly rigid separate chassis. The improved more supple suspension systems gave vehicles better road-holding and much improved the ride experienced by passengers.

As well as bespoke bodies the same coachbuilders also made short runs of more-or-less identical bodies to the order of dealers or the manufacturer of a chassis. The same body design might then be adjusted to suit different brands of chassis. Examples include Salmons & Sons' Tickford bodies with a patent device to raise or lower a convertible's roof, first used on their 19th-century carriages, or Wingham convertible bodies by Martin Walter.

Unless they were for mass-produced vehicles, justifying the cost of tooling up dies and presses, coachbuilt bodies were made of hand-shaped sheet metal, usually aluminum alloy. Pressed or hand-shaped the metal panels were fastened to a wooden frame of particularly light but strong timber. Many of the more important structural features of the bespoke or custom body such as A, B and C pillars were cast alloy components. Some bodies such as those entirely alloy bodies fitted to many Pierce-Arrow cars [3] contained little or no timber though they were mounted on a conventional steel chassis.

When popular automobile manufacturers brought body building in-house, larger dealers or distributors of ultra-luxury cars would commonly preorder stock chassis and the bodies they thought most likely to sell and inventory them in suitable quantities for sale off their showroom floor. In time, the practice of commissioning bespoke coachwork dwindled to a prerogative of wealth.

All ultra-luxury vehicles during the automobile's Golden Era before World War II were sold as chassis only. For example, when Duesenberg introduced their Model J, it was offered as chassis only, for $8,500. Other examples include the Bugatti Type 57, Cadillac V-16, Packard Twelve, Ferrari 250, Isotta Fraschini Tipo 8, Hispano-Suiza J12, and all Rolls-Royces produced before World War II. Delahaye had no in-house coachworks, so all its chassis were bodied by independents, who created their designs on the Type 135. For the Delahaye, most were bodied by Chapron, Labourdette, Franay, Saoutchik, Figoni et Falaschi, or Pennock.[ citation needed ]

The practice remained in limited force after World War II, with both luxury chassis and high-performance sports cars and gran turismos, waning dramatically by the late 1960s. Even Rolls-Royce acquiesced, debuting its first unibody model, the Silver Shadow, in 1965, before taking all R-R and Bentley bodying in-house.

Independent coachbuilders survived for a time after the mid-20th century, making bodies for the chassis produced by low-production companies such as Rolls-Royce, Ferrari, and Bentley. [4] Producing body dies is extremely expensive (a single door die can run to US$40,000), which is usually only considered practical when large numbers are involved—though that was the path taken by Rolls-Royce and Bentley after 1945 for their own in-house production. Because dies for pressing metal panels are so costly, from the mid 20th century, many vehicles, most notably the Chevrolet Corvette, were clothed with large panels of fiberglass-reinforced resin, which only require inexpensive molds. Glass has since been replaced by more sophisticated materials, if necessary hand-formed. Generally, these replace metal only where weight is of paramount importance.

The advent of unibody construction, where the car body is unified with and structurally integral to the chassis, made custom coachbuilding uneconomic. Many coachbuilders closed down, were bought by manufacturers, or changed their core business to other activities:

Survivors of the unibody production-line system

Vanden Plas is the name of coachbuilders who produced bodies for specialist and up-market automobile manufacturers. Latterly the name became a top-end luxury model designation for cars from subsidiaries of British Leyland and the Rover Group, last used in 2009 to denote the top-luxury version of the Jaguar XJ (X350). 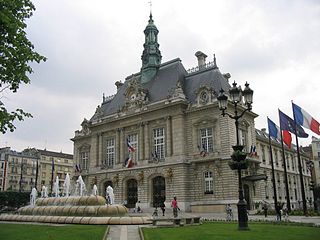 Levallois-Perret is a commune in the Hauts-de-Seine department and Île-de-France region of north-central France. It lies some 6 km from the centre of Paris in the north-western suburbs of the French capital. It is the most densely populated town in Europe and, together with neighbouring Neuilly-sur-Seine, one of the most expensive suburbs of Paris. 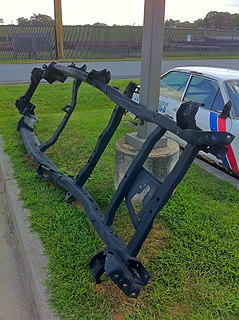 Body-on-frame is a common motor vehicle construction method, where a separate body or coach is mounted on a strong and relatively rigid vehicle frame or chassis that carries the powertrain and to which the wheels and their suspension, brakes, and steering are mounted. While this was the original method of building automobiles, body-on-frame construction is now used mainly for heavy trucks, pickups, and predominantly large SUVs.

Henri Chapron was a prominent French automobile coachbuilder. His atelier, created in 1919, was located in the Paris suburb of Levallois-Perret.

The Bentley Mark VI is an automobile from Bentley which was produced from 1946 to 1952. 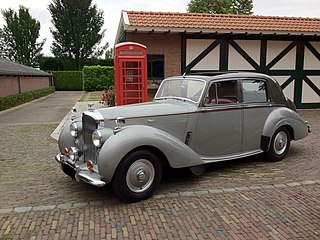 The Bentley R Type is the second series of post-war Bentley automobiles, replacing the Mark VI. Essentially a larger-boot version of the Mk VI, the R type is regarded by some as a stop-gap before the introduction of the S series cars in 1955. As with its predecessor, a standard body was available as well as coachbuilt versions by firms including H. J. Mulliner & Co., Park Ward, Harold Radford, Freestone and Webb, Carrosserie Worblaufen and others.

The Alfa Romeo 1900 is an automobile produced by Italian car manufacturer Alfa Romeo from 1950 to 1959. Designed by Orazio Satta, it was an important development for Alfa Romeo as the marque's first car built entirely on a production line and first production car without a separate chassis. It was also the first Alfa Romeo offered with left-hand drive. The car was introduced at the 1950 Paris Motor Show.

Park Ward was a British coachbuilder founded in 1919 which operated from Willesden in North London. In the 1930s, backed by Rolls-Royce Limited, it made technical advances which enabled the building of all-steel bodies to Rolls-Royce's high standards. Bought by Rolls-Royce in 1939, it merged with H. J. Mulliner & Co. in 1961 to form Mulliner Park Ward. 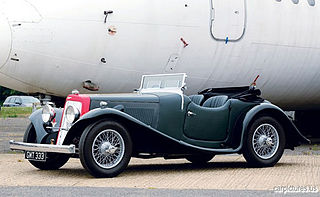 Abbey Coachworks Limited was a British coachbuilding business based in Merton, South West London and later Acton, North West London. It was active between 1930 and 1938. 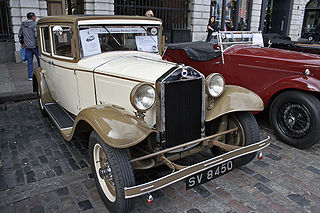 The Lancia Artena is a passenger car produced by Italian car manufacturer Lancia from 1931 to 1936, and from 1940 to 1942 chiefly for army and government use. It was powered by a 2-litre Lancia V4 engine, while chassis and factory bodies were shared with the more luxurious 2.6-litre V8-engined Lancia Astura. Total production amounted to 5,567 examples.

Carrosserie Pourtout was a French coachbuilding company. Founded by Marcel Pourtout in 1925, the firm is best known for its work in the decades prior to World War II, when it created distinctive and prestigious bodies for cars from numerous European manufacturers. Pre-war Pourtout bodies were mainly one-off, bespoke creations, typically aerodynamic and sporting in character. Together with chief coach designer and stylist Georges Paulin from 1933 to 1938, Pourtout pioneered the Paulin invented 'Eclipse' retractable hardtop system on four models of Peugeot, several Lancia Belna's and other car makes.
Among the company's customers was Georges Clemenceau, the physician and journalist who served as the prime minister of France from 1906 to 1909 and 1917 to 1920.

Weymann Fabric Bodies is a patented design system for fuselages for aircraft and superlight coachwork for motor vehicles. The system used a patent-jointed wood frame covered in fabric. It was popular on cars from the 1920s until the early 1930s as it reduced the usual squeaks and rattles of coachbuilt bodies by its use of flexible joints between body timbers. 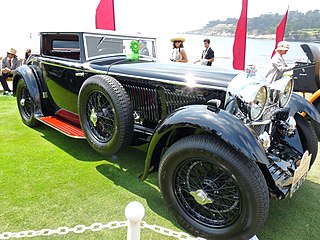 J Gurney Nutting & Co Limited was an English firm of bespoke coachbuilders specialising in sporting bodies founded in 1918 as a new enterprise by a Croydon firm of builders and joiners of the same name. The senior partner was John (Jack) Gurney Nutting (1871–1946).

The Renault Suprastella is a large car that was introduced by Renault in the Spring of 1938 as a replacement for the Renault Nervastella from which it inherited its mechanical elements and many other essential characteristics.

A rolling chassis is the chassis without bodywork of a motor vehicle, assembled with its final powertrain. 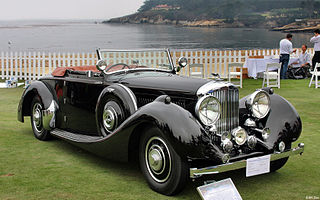 The Carlton Carriage Company was a highly respected London coachbuilder that provided bespoke coachwork for some of the finest car makers of the 1920s and 30s. They are best known for their drophead coupes which are archetypal designs of the British Jazz Era.

Franay was a French coachbuilder of renown operating at Levallois-Perret, a suburb on the prosperous north-western edge of Paris. The company was founded in 1903 by Jean-Baptiste Franay, a carriage upholsterer, following an apprenticeship with Binder. It was later taken over by his son, Marius.