In electronics, a multi-transistor configuration called the Darlington configuration (commonly called a Darlington pair) is a compound structure of a particular design made by two bipolar transistors connected in such a way that the current amplified by the first transistor is amplified further by the second one. [1] This configuration gives a much higher current gain than each transistor taken separately. It was invented in 1953 by Sidney Darlington.

A Darlington pair behaves like a single transistor, meaning it has one base, collector, and emitter. It typically creates a high current gain (approximately the product of the gains of the two transistors, due to the fact that their β values multiply together). A general relation between the compound current gain and the individual gains is given by:

If β1 and β2 are high enough (hundreds), this relation can be approximated with:

A typical Darlington transistor has a current gain of 1000 or more, so that only a small base current is needed to make the pair switch on higher switching currents.

Another advantage involves providing a very high input impedance for the circuit which also translates into an equal decrease in output impedance.

The ease of creating this circuit also provides an advantage. It can be simply made with two separate NPN transistors, and is also available in a variety of single packages.

For silicon-based technology, where each VBEi is about 0.65 V when the device is operating in the active or saturated region, the necessary base–emitter voltage of the pair is 1.3 V.

Another problem is a reduction in switching speed or response, because the first transistor cannot actively inhibit the base current of the second one, making the device slow to switch off. To alleviate this, the second transistor often has a resistor of a few hundred ohms connected between its base and emitter terminals. [1] This resistor provides a low-impedance discharge path for the charge accumulated on the base-emitter junction, allowing a faster transistor turn-off.

The Darlington pair has more phase shift at high frequencies than a single transistor and hence can more easily become unstable with negative feedback (i.e., systems that use this configuration can have poor performance due to the extra transistor delay).

Integrated devices can take less space than two individual transistors because they can use a shared collector. Integrated Darlington pairs come packaged singly in transistor-like packages or as an array of devices (usually eight) in an integrated circuit.

Darlington pairs are available as integrated packages or can be made from two discrete transistors; Q1, the left-hand transistor in the diagram, can be a low power type, but normally Q2 (on the right) will need to be high power. The maximum collector current IC(max) of the pair is that of Q2. A typical integrated power device is the 2N6282, which includes a switch-off resistor and has a current gain of 2400 at IC=10A.

A Darlington pair can be sensitive enough to respond to the current passed by skin contact even at safe zone voltages. Thus it can form a new input stage of a touch-sensitive switch.

Darlington transistors can be used in high-current[ clarification needed ] circuits, such as those involving computer control of motors or relays. The current is amplified from the normal low level of the computer output line to the amount needed by the connected device. 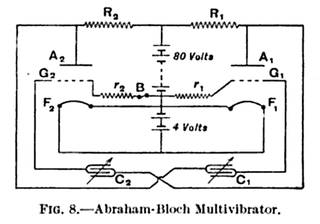 A multivibrator is an electronic circuit used to implement a variety of simple two-state devices such as relaxation oscillators, timers and flip-flops. It consists of two amplifying devices cross-coupled by resistors or capacitors. The first multivibrator circuit, the astable multivibrator oscillator, was invented by Henri Abraham and Eugene Bloch during World War I. They called their circuit a "multivibrator" because its output waveform was rich in harmonics. 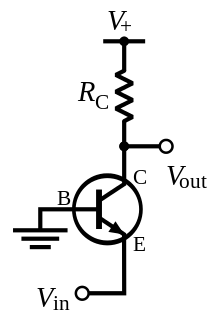 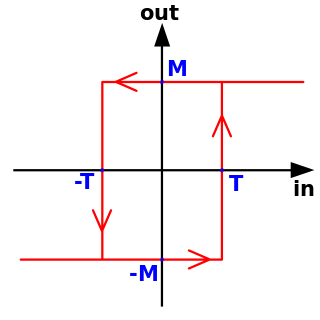 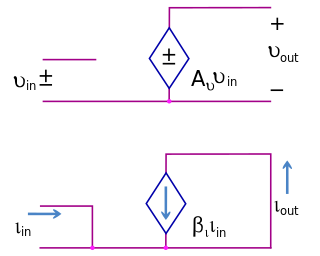 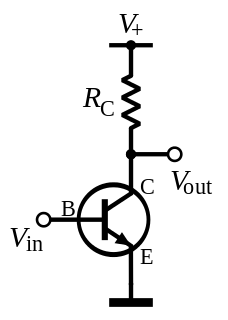 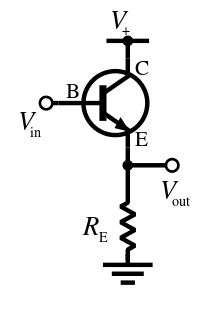 A network, in the context of electronics, is a collection of interconnected components. Network analysis is the process of finding the voltages across, and the currents through, all network components. There are many techniques for calculating these values. However, for the most part, the techniques assume linear components. Except where stated, the methods described in this article are applicable only to linear network analysis.

An avalanche transistor is a bipolar junction transistor designed for operation in the region of its collector-current/collector-to-emitter voltage characteristics beyond the collector-to-emitter breakdown voltage, called avalanche breakdown region. This region is characterized by avalanche breakdown, which is a phenomenon similar to Townsend discharge for gases, and negative differential resistance. Operation in the avalanche breakdown region is called avalanche-mode operation: it gives avalanche transistors the ability to switch very high currents with less than a nanosecond rise and fall times. Transistors not specifically designed for the purpose can have reasonably consistent avalanche properties; for example 82% of samples of the 15V high-speed switch 2N2369, manufactured over a 12-year period, were capable of generating avalanche breakdown pulses with rise time of 350 ps or less, using a 90V power supply as Jim Williams writes. 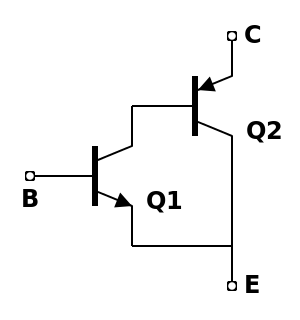 Bipolar transistors must be properly biased to operate correctly. In circuits made with individual devices, biasing networks consisting of resistors are commonly employed. Much more elaborate biasing arrangements are used in integrated circuits, for example, bandgap voltage references and current mirrors. The voltage divider configuration achieves the correct voltages by the use of resistors in certain patterns. By selecting the proper resistor values, stable current levels can be achieved that vary only little over temperature and with transistor properties such as β.

Baker clamp is a generic name for a class of electronic circuits that reduce the storage time of a switching bipolar junction transistor (BJT) by applying a nonlinear negative feedback through various kinds of diodes. The reason for slow turn-off times of saturated BJTs is the stored charge in the base. It must be removed before the transistor will turn off since the storage time is a limiting factor of using bipolar transistors and IGBTs in fast switching applications. The diode-based Baker clamps prevent the transistor from saturating and thereby accumulating a lot of stored charge. 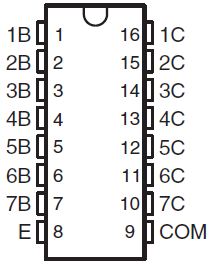 The ULN2003A is an array of seven NPN Darlington transistors capable of 500 mA, 50 V output. It features common-cathode flyback diodes for switching inductive loads. It can come in PDIP, SOIC, SOP or TSSOP packaging. In the same family are ULN2002A, ULN2004A, as well as ULQ2003A and ULQ2004A, designed for different logic input levels.