The valley was inhabited by the Ute people prior to the coming of the first U.S. settlers over Independence Pass in 1879. The first settlers were prospectors looking for silver in the wake of the Colorado Silver Boom in nearby Leadville. Aspen flourished as a mining community in the late 1880s and early 1890s until the silver crash of 1893. In the late 19th century and early 20th century, coal mining in the valley of the Crystal emerged as an important extractive industry, one that has nearly entirely vanished (coal is still extracted south of McClure Pass in the nearby North Fork Valley).

The Roaring Fork Valley is part of the larger Roaring Fork Watershed, which includes the Fryingpan and Crystal River valleys. The valley extends for approximately 50 mi (80 km) southeast to northwest from Aspen northwest to Glenwood Springs at the mouth of the Roaring Fork on the Colorado River, ranging in width between 1 and 5 mi (1.6 and 8.0 km). It is surrounded by mountains on all sides, in particular on its southwest edge by the high Elk Mountains that are location of the Aspen/Snowmass ski resorts. The upper (southeast) end of the valley is sometimes called the Aspen Valley, but locals simply refer to it as "up-valley" - Aspen - and "down-valley" - Glenwood Springs. Mount Sopris dominates the lower (northwest) end of the valley and serves as an unofficial symbol of the region. Many think the Roaring Fork River, from which the valley was named, is the unofficial symbol of the region.

The politics of the Roaring Fork Watershed are somewhat complex, arising principally from the fact that the watershed is split awkwardly among four different counties: Pitkin (Aspen), Eagle County (Basalt), Garfield County (Glenwood Springs, Carbondale), and Gunnison County. The fragmented structure is in contrast to the nearby Eagle Valley, which lies entirely within Eagle County. The fragmented governmental structure has made the adoption of a comprehensive land-use and growth policy more difficult, especially in regard to Aspen, which has struggled between the extremes of allowing unbridled growth leading to sprawl and restricting growth altogether. Roaring Fork Conservancy works on river and water issues across these lines and the Roaring Fork Watershed Collaborative works to address regional issues in this geographic area.

The main economic engine of the valley is the Aspen/Snowmass recreational skiing complex which directly or indirectly drives the related tourism, hospitality, retail, construction, real estate, professional service and property maintenance industries. Although skiing forms the foundation of the economy, other activities increasingly contribute to visitor numbers. Non-winter recreational and cultural activities such as fly fishing on the Fryingpan and whitewater rafting on the Roaring Fork, hiking near the Maroon Bells in the Maroon Bells–Snowmass Wilderness, enjoying the caverns and hot springs in Glenwood Springs, the Aspen Institute and Rocky Mountain Institute conferences, the Aspen Music Festival, and other cultural events attract visitors year-round. Although the valley floor is largely privately owned, most of the surrounding highlands are within the White River National Forest and are another source of recreation and tourism. Agriculture, principally livestock raising, plays a very moderate and declining role in the valley's economy.[ citation needed ] However, the ranches that still cover large parts of the lower valley contribute to tourism. Potato cultivation has historically been important in the lower valley, but is virtually nonexistent at present.[ citation needed ]

The valley has been one of the most rapidly growing areas of Colorado in recent years,[ when? ] not only in the vicinity of Aspen, but notably in the lower end of the valley below Basalt.[ citation needed ] The communities of Basalt and Carbondale have served as bedroom communities for day workers in Aspen, where high property values have increasingly strained the ability of low and middle-income workers to afford the cost of living, though the affluence that marks the Upper Roaring Fork Valley is gradually leaking into the rest of the Valley.[ original research? ] Many employees in Glenwood Springs live further down the Colorado river due to the same acute lack of affordable housing.[ citation needed ] 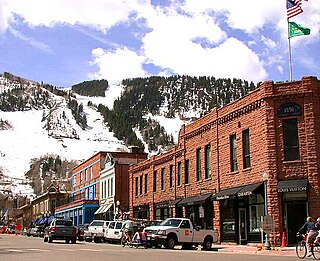 The City of Aspen is the Home Rule Municipality that is the county seat and the most populous municipality of Pitkin County, Colorado, United States. Its population was 6,658 at the 2010 United States Census. It is in a remote area of the Rocky Mountains' Sawatch Range and Elk Mountains, along the Roaring Fork River at an elevation just below 8,000 feet (2,400 m) above sea level on the Western Slope, 11 miles (18 km) west of the Continental Divide.

Pitkin County is a county in the U.S. state of Colorado. As of the 2010 census, the population was 17,148. The county seat and largest city is Aspen. The county is named for Colorado Governor Frederick Walker Pitkin. Pitkin County has the seventh-highest per capita income of any U.S. county. Measured by mean income of the top 5% of earners, it is the wealthiest U.S. county.

The Town of Basalt is a Home Rule Municipality located in Eagle and Pitkin counties, Colorado, United States. The town population was 3,857 at the 2010 United States Census.

The Town of Carbondale is a Home Rule Municipality located in Garfield County, Colorado, United States. Carbondale is a part of the Glenwood Springs, CO Micropolitan Statistical Area. The town population was 6,427 at the 2010 United States Census. The town is located in the Roaring Fork Valley, downstream from Aspen and upstream from the mouth of the Roaring Fork River at Glenwood Springs. The town proper sits on the south bank of the river, at the confluence of the Crystal River. Carbondale's horizon is dominated by the 12,953 ft tall Mount Sopris several miles to the south of town. 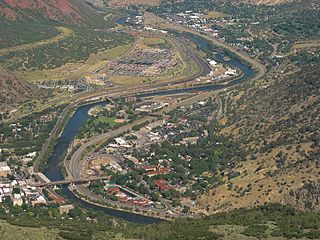 The City of Glenwood Springs is the Home Rule Municipality that is the county seat of Garfield County, Colorado, United States. Glenwood Springs is located at the confluence of the Roaring Fork River and the Colorado River, threading together the Roaring Fork Valley and a series of smaller towns up and down the Colorado River. As of the 2010 census it had a population of 9,614. 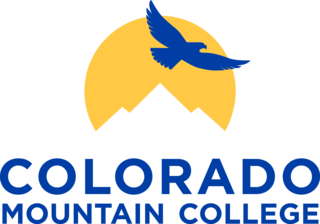 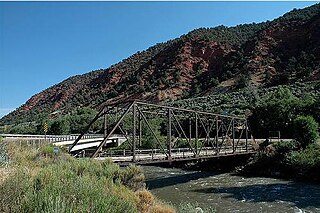 Snowmass is an unincorporated community and a U.S. Post Office located in Pitkin County, Colorado, United States. It is situated in the valley of the Roaring Fork River, near the mouth of Snowmass Creek along State Highway 82 between Aspen and Basalt. It consists largely of a post office, several commercial businesses, and surrounding houses and ranches. The Snowmass Post Office has the ZIP Code 81654.

State Highway 82 is an 85.3-mile-long (137.3 km) state highway in the U.S. state of Colorado. Its western half provides the principal transportation artery of the Roaring Fork Valley on the Colorado Western Slope, beginning at Interstate 70 (I-70) and U.S. Highway 6 in Glenwood Springs southeast past Carbondale, Basalt and Aspen. From there it continues up the valley to cross the Continental Divide at Independence Pass. On the Eastern Slope, it follows Lake Creek past some of Colorado's highest mountains to Twin Lakes Reservoir, where it ends at US 24 south of Leadville.

The original Maroon Creek Bridge is a steel trestle along State Highway 82 at the western boundary of Aspen, Colorado, United States. It was designed by George S. Morison in 1888 for the Colorado Midland Railroad, one of the last viaducts in Colorado built for a standard gauge mountain railroad in the 19th century. Of the five steel bridges the Midland built, it is the only one still extant. Due to the later removal of most track and the rail depots, the bridge is the most visible remnant of rail service to Aspen. In 1985 it was listed on the National Register of Historic Places along with other highway bridges in the state, including the Sheely Bridge, also in Aspen. 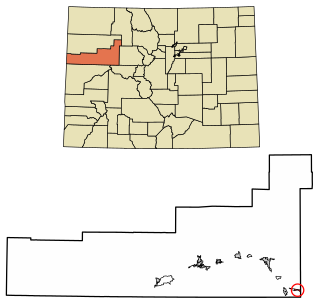 Catherine is an unincorporated community and a census-designated place (CDP) located in and governed by Garfield County, Colorado, United States. The CDP is a part of the Glenwood Springs, CO Micropolitan Statistical Area. The population of the Catherine CDP was 228 at the United States Census 2010. The Glenwood Springs post office serves the area.

The Lake Christine Fire burned near Basalt and Carbondale, Colorado, United States, in Eagle County. The fire was the result of an act of criminal arson. It started on July 3, 2018 and was later downgraded to a Burned Area Response on September 4, 2018 after 13 weeks. It destroyed a total of 12,588 wilderness acres on Basalt Mountain and seriously injured a volunteer firefighter. The Lake Christine fire also destroyed the home of a long-time volunteer firefighter who was battling the blaze in response to his call of duty on the evening of July 4th. Several structures were destroyed.