The City of Lakewood is the home rule municipality that is the most populous municipality in Jefferson County, Colorado, United States. Lakewood is the fifth-most populous city in Colorado and the 172nd-most populous city in the United States. The city population was 142,980 at the 2010 US Census. Lakewood, immediately west of Denver, is one of the principal cities of the Denver–Aurora–Lakewood, CO Metropolitan Statistical Area and a major city of the Front Range Urban Corridor.

The urban and suburban development of the community known as Lakewood was started in 1889 by Charles Welch and W.A.H. Loveland, who platted a 13-block area along Colfax Avenue west of Denver in eastern Jefferson County. Loveland, the former president of the Colorado Central Railroad, retired to the new community of Lakewood after many years of living in Golden.[ citation needed ]

Until 1969, the area known as Lakewood had no municipal government, relying instead on several water districts, several fire districts, and the government of Jefferson County. Lakewood was a community with policing provided by the Jefferson County Sheriff, several volunteer staffed fire districts, and some neighborhoods without street lights or sidewalks. However, the community had already existed for about 80 years.[ citation needed ]

The City of Lakewood was incorporated in 1969 as Jefferson City. Soon after, an election was held and the city's name was changed to Lakewood, due to an overwhelming dislike of "Jefferson City" and the belief that it would be confused with existing communities in Colorado and Missouri. [8] At the time of incorporation, the city population was already over 90,000.[ citation needed ]

Lakewood never had a traditional downtown area.[ citation needed ] West Colfax Avenue served the metropolitan area as U.S. Route 40 and the main route joining Denver with the Rocky Mountains. [ citation needed ] As such, Colfax from Harlan west to Kipling and beyond had mostly commercial establishments. In addition to the Jewish Consumptive Relief Society (JCRS) for tuberculosis patients, the small, frame Methodist Church, and telephone exchange, by the 1950s grocery and drug stores, gas stations, restaurants and taverns, several motels, branch banks, a movie theater, a roller rink, a bowling alley, and used car lots emerged there. Several multiple-business "shopping centers" developed followed by much larger centers at JCRS and Westland. The Villa Italia Mall on West Alameda Avenue, 20 blocks south of Colfax, reflected the southward expansion of Lakewood settlement and housed a larger concentration of retail space. As the mall went into decline, the Lakewood City Council developed a plan to demolish the Villa Italia Mall and replace it with a new development called Belmar. [9]

In 2011, Lakewood was named an All-America City for the first time.

Lakewood experiences a semiarid climate (Köppen BSk) featuring winters fluctuating between mild to cold and snowy while summers are warm to hot, with great temperature differences (about 30°F) between day and night year round. Precipitation is concentrated in the spring and summer.

Lakewood's economy is diverse, while the largest employers are government. Companies based in Lakewood include Einstein Bros. Bagels, FirstBank, and The Integer Group.

As of 2013, 67.3% of the population over the age of 16 was in the labor force. 0.1% was in the armed forces, and 67.3% was in the civilian labor force with 61.1% employed and 6.2% unemployed. The occupational composition of the employed civilian labor force was 38.6% in management, business, science, and arts; 25.9% in sales and office occupations; 16.9% in service occupations; 9.9% in production, transportation, and material moving; and 8.7% in natural resources, construction, and maintenance. The three industries employing the largest percentages of the working civilian labor force were educational services, health care, and social assistance (18.4%); professional, scientific, and management, and administrative and waste management services (13.8%); and retail trade (11.9%). [18]

As of 2020, the mayor is Adam Paul. The council members representing the first ward are Ramey Johnson and Charley Able; Jacob la Bure and Sharon Vincent represent the second ward; Anita Springsteen and Mike Bieda represent the third ward; David Skilling and Barb Franks represent the fourth ward  and the fifth ward is represented by Karen Harrison and Dana Gutwein.

The town is served by the Jefferson County Public Library.

Transportation within the city, and to other areas in the metropolitan area, is provided by RTD. RTD's Light Rail W line runs directly through Lakewood. Intercity transportation is provided by Bustang. Lakewood is along Bustang's West Line, which connects Denver to Grand Junction. [22]

Landmarks and historical points of interest include:[ citation needed ] 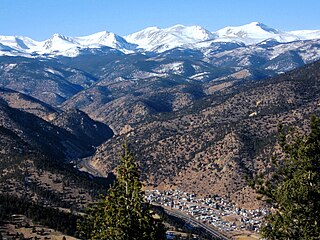 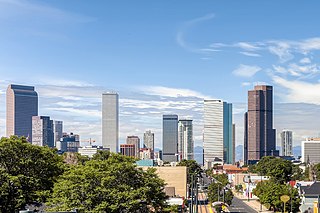 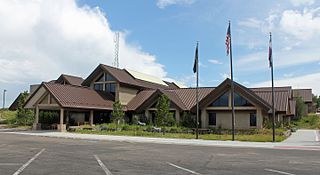 Gilpin County is a county located in the U.S. state of Colorado, smallest in land area behind only the City and County of Broomfield. As of the 2010 census, the population was 5,441. The county seat is Central City. The county was formed in 1861, while Colorado was still a Territory, and was named after Colonel William Gilpin, the first territorial governor. 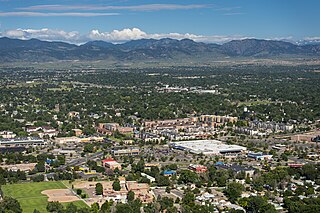 The City of Arvada is a Home Rule Municipality located in Jefferson and Adams counties, Colorado, United States. Arvada is a part of the Denver–Aurora–Lakewood, CO Metropolitan Statistical Area. As of the 2010 census the population was 106,433, and in 2020 the estimated population was 122,974, ranking Arvada as the seventh most populous municipality in Colorado. The Olde Town Arvada historic district is 7 miles northwest of the Colorado State Capitol in Denver. 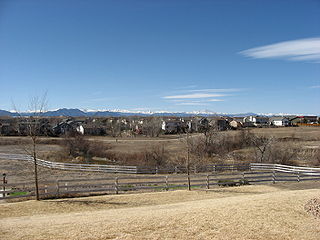 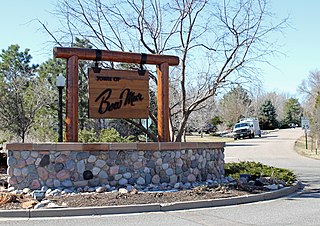 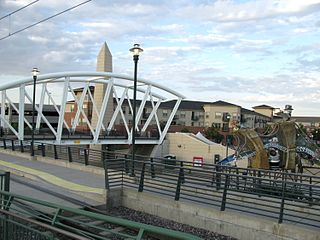 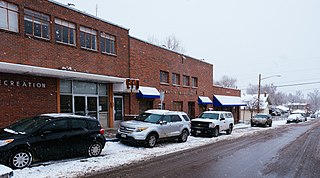 The City of Edgewater is a Home Rule Municipality located in Jefferson County, Colorado, United States. Edgewater is located immediately west of Denver and is a part of the Denver–Aurora–Lakewood, CO Metropolitan Statistical Area. As of the 2010 census, the population is 5,170. Edgewater is surrounded by Denver to the east, Lakewood to the south and west, and Wheat Ridge to the north. 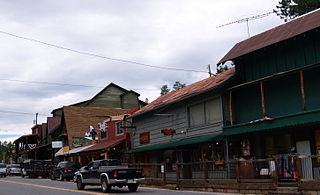 Evergreen is an unincorporated town, a post office, and a census-designated place (CDP) located in and governed by Jefferson County, Colorado, United States. The CDP is a part of the Denver–Aurora–Lakewood, CO Metropolitan Statistical Area. The Evergreen post office has the ZIP Codes 80439 and 80437. At the United States Census 2010, the population of the Evergreen CDP was 9,038, while the population of the 80439 ZIP Code Tabulation Area was 23,778 including adjacent areas. The Evergreen Metropolitan District provides services.

Indian Hills is an unincorporated town, a post office, and a census-designated place (CDP) located in and governed by Jefferson County, Colorado, United States. The CDP is a part of the Denver–Aurora–Lakewood, CO Metropolitan Statistical Area. The Indian Hills post office has the ZIP code 80454. At the United States Census 2010, the population of the Indian Hills CDP was 1,280, while the population of the 80454 ZIP Code Tabulation Area was 1,224. 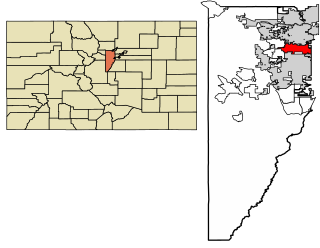 The City of Wheat Ridge is a Home Rule Municipality located in Jefferson County, Colorado, United States. Wheat Ridge is located immediately west of Denver and is a part of the Denver–Aurora–Lakewood, CO Metropolitan Statistical Area. The Wheat Ridge Municipal Center is approximately 5 miles (8 km) west-northwest of the Colorado State Capitol in Denver. The city had a population of 30,166 as of the 2010 Census. 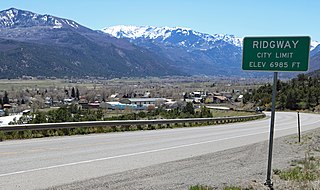 Ridgway is a Home Rule Municipality in Ouray County, in the southwestern portion of the U.S. State of Colorado. The town is a former railroad stop on the Uncompahgre River in the northern San Juan Mountains. The town population was 713 at the 2000 census and 924 according to the 2010 census. 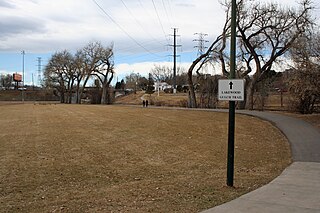 Lakewood Gulch drains a section of Lakewood and west Denver, Colorado into the South Platte River. It is the historic location of the old Interurban Shortline Railway and, in 2008, is a greenbelt that includes Rude Park, Sanchez Park and Lakewood Gulch Park. The gulch passes through Lakewood from west to east before entering the Denver neighborhoods of Sun Valley and Villa Park. It contains a part of the route of the (current) heritage streetcar Platte Valley Trolley and the Denver sections of the creek have an adjacent bike path. According to the Jefferson County Colorado Place Names Directory, "Lakewood Gulch originates on the north east foot of Green Mountain in Lakewood, flows east through Sixth Avenue West Park and Red Rocks Community College and continues east through Lakewood into Denver, where it joins the South Platte River southwest of the intersection of I-25 and Colfax Avenue."

The City of Littleton is a Home Rule Municipality located in Arapahoe, Douglas, and Jefferson counties, Colorado, United States. Littleton is the county seat of Arapahoe County and is a part of the Denver–Aurora–Lakewood, CO Metropolitan Statistical Area. The city population was 41,737 at the 2010 United States Census, ranking as the 20th most populous municipality in the State of Colorado. 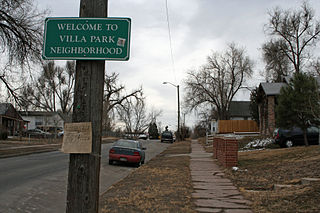 Villa Park is a neighborhood of Denver, Colorado. 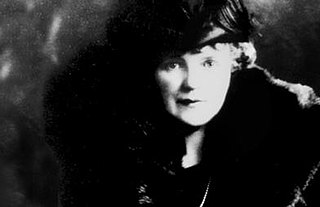 Mary Madeline "May" Bonfils Stanton was an American heiress and philanthropist. She and her younger sister, Helen Bonfils, succeeded their father, Frederick Gilmer Bonfils, as principal owners of The Denver Post. However, May's elopement at age 21 with a non-Catholic salesman had forged a rift in her relationship with her parents and sister that worsened when Helen inherited the majority of their parents' estates. Following a three-year legal battle over the inheritance, the sisters cut off all communication with each other. May married twice but did not have children. Living a reclusive life, she invested her fortune into building and furnishing her 750-acre (300 ha) estate in Lakewood, Colorado – which included a mansion that was an exact replica of Marie Antoinette's Petit Trianon château in Versailles – and into many philanthropic endeavors in the state of Colorado. The Bonfils–Stanton Foundation, established by her second husband after her death in 1962, continues to support the arts in Colorado. She was posthumously inducted into the Colorado Women's Hall of Fame in 1985.