Administrative divisions of Mongolia during Qing

The estate of Jebtsundamba Khutugtu, the Great Shabi (from Mongolian shabi, disciple) in 1723, became independent from the four aimags in the sense that its subjects were exempt from most taxes and corvees. The shabi did not - except the three Darkhad otog in Khövsgöl - control territory. Rather, its subjects mostly lived among the general population. The shabi was led by a Shanzav or Shanzobda, and divided into otog, and then bag and arvan.[ citation needed ] Similar shabis existed for other high lamas. [1]

The direct-controlled Mongols (Chinese :內屬蒙古) were banners (khoshuu) controlled by provinces, generals and ambasa. The following regions were directly controlled by the Manchu:

Inner Mongolia's [2] original 24 aimags (ᠠᠶᠢᠮᠠᠭ) were replaced by 49 banners (khoshuus) that would later be organized into six leagues (chuulgans, assemblies). The eight Chakhar banners and the two Tümed banners around Guihua were directly administered by the Manchu.

The Khalkha aimags were preserved - with the notable exception of the establishment of Sain Noyan aimag in 1725. Each aimag had a chigulgan, usually named after the place (mountains or rivers) where it convened. The aimags were divided into banners - whose number increased from originally eight eventually to 86 - and further into sums. [3] A sum consisted of 150 men fit for military service, a bag of 50. [4] A military governor was installed in Uliastai, and two civil governors (amban) in Khüree and in Kobdo.

Outer Mongolia was a territory of the Qing dynasty (1691–1911). Its area was roughly equivalent to that of the modern state of Mongolia, sometimes called "Outer Mongolia" in China today, plus the Russian republic of Tuva.

Dayan Khan was a Mongol khan who reunited the Mongols under Chinggisid supremacy in the Northern Yuan dynasty based in the Mongolian Plateau. His reigning title, "Dayan", means the "Great Yuan", as he enthroned himself as Great Khan of the Great Yuan, though the Yuan dynasty, the principal khanate of the Mongol Empire, had already lost control over China proper a century earlier (1368).

Tümengken Tsoghtu Khong Tayiji, was a noble in Northern Khalkha. He expanded into Amdo to help the Karma Kagyu sect of Tibetan Buddhism but was overthrown by Güshi Khan, who supported the rival Gelug sect.

Ligdan Khutugtu Khan was the last khan of the Northern Yuan dynasty based in the Mongolian Plateau as well as the last in the Borjigin clan of Mongol Khans who ruled the Mongols from Chakhar. His unpopular reign generated violent opposition due to his harsh restrictions over the Mongols. His alliance with Ming dynasty of China, sponsorship of Tibetan Buddhism in Chakhar and reorganization of Mongolian political divisions were ineffective when the Qing dynasty became the major power in East Asia.

Chingunjavi was the Khalka prince ruler of the Khotogoids and one of the two major leaders of the 1756-57 rebellion in Outer Mongolia. Although his rebellion failed, he is nowadays often hailed as a fighter for Mongolia's independence from the Manchu Qing dynasty who ruled China at that time.

Mongolia under Qing rule was the rule of the Qing dynasty over the Mongolian steppe, including the Outer Mongolian 4 aimags and Inner Mongolian 6 leagues from the 17th century to the end of the dynasty. "Mongolia" here is understood in the broader historical sense. The last Mongol Khagan Ligden saw much of his power weakened in his quarrels with the Mongol tribes and was defeated by the Manchus, he died soon afterwards. His son Ejei Khan gave Hong Taiji the imperial authority, ending the rule of Northern Yuan dynasty then centered in Inner Mongolia by 1635. However, the Khalkha Mongols in Outer Mongolia continued to rule until they were overrun by the Dzungars in 1690, and they submitted to the Qing dynasty in 1691.

Khotogoid is a subgroup of Mongol people in northwestern Mongolia. The Khotogoid people live roughly between Uvs Lake to the west and the Delgermörön river to the east. The Khotogoids belong to north western Khalkha and were one of the major groups that make up Khalkha.

The Mongolian nobility arose between the 10th and 12th centuries, became prominent in the 13th century, and essentially governed Mongolia until the early 20th century.

Various nomadic empires, including the Xiongnu, the Xianbei state, the Rouran Khaganate (330–555), the First 552–603) and Second Turkic Khaganates (682–744) and others, ruled the area of present-day Mongolia. The Khitan people, who used a para-Mongolic language, founded an empire known as the Liao dynasty (916–1125) and ruled Mongolia and portions of the present-day Russian Far East, northern Korea, and North China.

An aimag, originally a Mongolian word meaning "tribe", is an administrative subdivision in Mongolia and in Inner Mongolia (China). 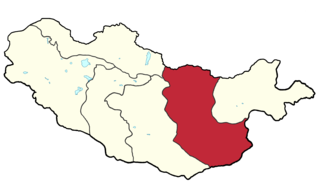 Tüsheet Khan refers to the territory as well as the Chingizid dynastic rulers of the Tüsheet Khanate, one of four Khalkha Mongolian Khanates that emerged from remnants of the Mongol Empire after the death of Dayan Khan's son Gersenji in 1549 and which continued until 1930.