The Golden Urn refers to a method introduced by the Qing dynasty of China in the late-18th century to select rinpoches, lamas and other high offices within Tibetan Buddhism. It was institutionalized in the 29-Article Ordinance for the More Effective Governing of Tibet. The Qianlong Emperor also published the article The Discourse of Lama in 1792 to explain the history of lamas and the reincarnation system, while also explaining why he thought it would be a fair system of choosing them, as opposed to choosing the Lama based on the advice of only a few. [1] [2] [3]

In 1935, the Ordinance of Lama Temple Management (Chinese :管理喇嘛寺廟條例) [4] [5] was published by the Central Government of China.

Based on the Ordinance of Lama Temple Management (Chinese :管理喇嘛寺廟條例), in 1936, the Golden Urn system was also institutionalized in the Method of Reincarnation of Lamas (Chinese :喇嘛轉世辦法) [6] [7] by the Mongolian and Tibetan Affairs Commission of the Central Government.

In 2007, the Golden Urn became institutionalized in the State Religious Affairs Bureau Order No. 5 of the Central Government, Article 8 states that approval is required for request to exempt lot-drawing process using Golden Urn. [8]

The Golden Urn originated in a decree issued by the Qianlong Emperor in 1792, after the Qing victory in the Second Invasion of the Sino-Nepalese War. Article One of the decree, the 29-Article Ordinance for the More Effective Governing of Tibet, was designed to be used in the selection of rinpoches, lamas and other high offices within Tibetan Buddhism, including the Dalai Lamas, Panchen Lamas and Mongolian lamas. [12] [13] [14] In Qianlong Emperor's article The Discourse of Lama (Chinese :喇嘛说) [1] which was published also in 1792, he explained the history of lamas and the reincarnation system, he inferred that the reincarnation system is only man-made, [15] and creating rules is only to facilitate those monks, [16] and to eliminate drawbacks associated with the man-made reincarnation [17] [18] Mike Dash argued that the Urn's real purpose was to allow the Qing Emperors of China to control the selection process. [19]

Two Golden Urns were issued by the Qianlong Emperor: one is enshrined in Jokhang Temple in Lhasa and is to be used for choosing Dalai and Panchen Lama reincarnations; the other is in Yonghe Temple in Beijing for choosing Mongolian Lama, known as Jebtsundamba Khutughtu, reincarnations. [20]

The specific ritual to be followed when using the Golden Urn was written by the 8th Dalai Lama, Jamphel Gyatso. [12] The names and dates of birth of each candidate were to be written in the Manchu, Han, and Tibetan languages on metal or ivory slips and placed in the golden urn. [13] After prayers before the statue of the Jowo in the Jokhang temple in Lhasa, a slip was drawn. The 7th Panchen Lama, Palden Tenpai Nyima, used the Golden Urn for the first time in 1822 to choose the 10th Dalai Lama, Tsultrim Gyatso.

In 2018, historian Max Oidtmann compiled various sources and concluded that between 1793 and 1825 the Golden Urn was used for roughly half the major reincarnation searches in Tibet and Mongolia, and overall it was used 79 times for 52 different major lineages. [23]

In 2007, the State Administration for Religious Affairs, [25] the People's Republic of China's agency charged with keeping religion under state control, issued Order No. 5 regarding reincarnations in China. This order states that any tulkus (reincarnated teachers), which include the Dalai and Panchen Lamas, who plan to be claimed to be reincarnations of tulkus must get government approval. [26] 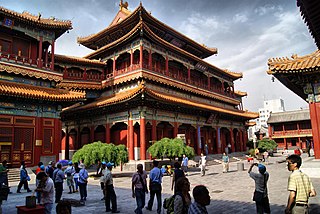 The Yonghe Temple, also known as the Yonghe Lamasery, or popularly as the Lama Temple, is a temple and monastery of the Gelug school of Tibetan Buddhism located on 12 Yonghegong Street, Dongcheng District, Beijing, China. The building and artwork of the temple is a combination of Han Chinese and Tibetan styles. This building is one of the largest Tibetan Buddhist monasteries in China proper. The current abbot is Lama Hu Xuefeng. 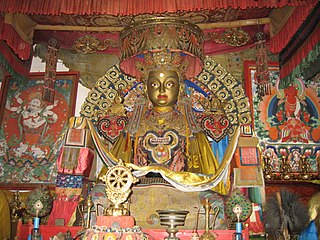 Buddhism is the largest religion of Mongolia practiced by 53% of Mongolia's population, according to the 2010 Mongolia census. Buddhism in Mongolia derives much of its recent characteristics from Tibetan Buddhism of the Gelug and Kagyu lineages, but is distinct and presents its own unique characteristics. Gedhun Choekyi Nyima, is the 11th Panchen Lama belonging to the Gelugpa school of Tibetan Buddhism, as recognized and announced by the 14th Dalai Lama on 14 May 1995. Three days later on 17 May, the 6-year-old Panchen Lama was kidnapped by the Chinese government, after the State Council of the People's Republic of China failed in its efforts to install a substitute. A Chinese substitute is seen as a political tool to undermine the reincarnation of the Dalai Lama, which traditionally is recognized by the Panchen Lama. Gedhun Choekyi Nyima remains forcibly detained by the Chinese government, along with his family, in an undisclosed location since 1995. His khenpo, Chadrel Rinpoche, and another Gelugpa monk, Jampa Chungla, were also arrested. The United Nations, with the support of numerous states, organizations, and private individuals continue to call for the 11th Panchen Lama's release.

The Changkya Khutukhtu was the title held by the spiritual head of the Gelug lineage of Tibetan Buddhism in Inner Mongolia during the Qing dynasty.

The present 14th Dalai Lama has suggested different possibilities to identify the next (15th) Dalai Lama, but has not publicly specified the ritual qualifications and alleged mystical signs upon the method of rebirth would occur. 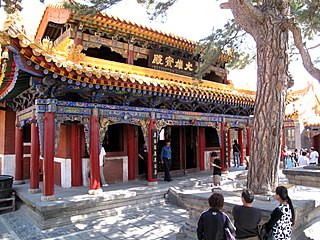 The Pusading is a Buddhist temple located in Taihuai Town of Wutai County, Shanxi, China. The temple structure is considered the best of all temples in Mount Wutai. 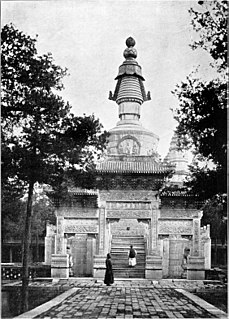 The Discourse of Lama《喇嘛说》is an article written by the Qianlong Emperor in the 57th year of the Qianlong era of the Qing dynasty (1792) to elaborate on the policy of using lot-drawing process with Golden Urn to pick reincarnated lamas including the Dalai Lama and Panchen Lama. The article was engraved on the stone tablet in the Lama Temple in Beijing. The height of the stone tablet is 598 cm.

The 29-Article Ordinance for the More Effective Governing of Tibet was supposed to be an imperial decree published in 1793 by the Qianlong Emperor in the Qing Dynasty, the last imperial dynasty of China.There were three versions in the Tibetan language, and the original was not found. The corresponding text in Chinese was not listed as 29 articles, but parts and parcels of it were seen in various Memorial to the throne and decrees.